13 more of the dumbest things in golf 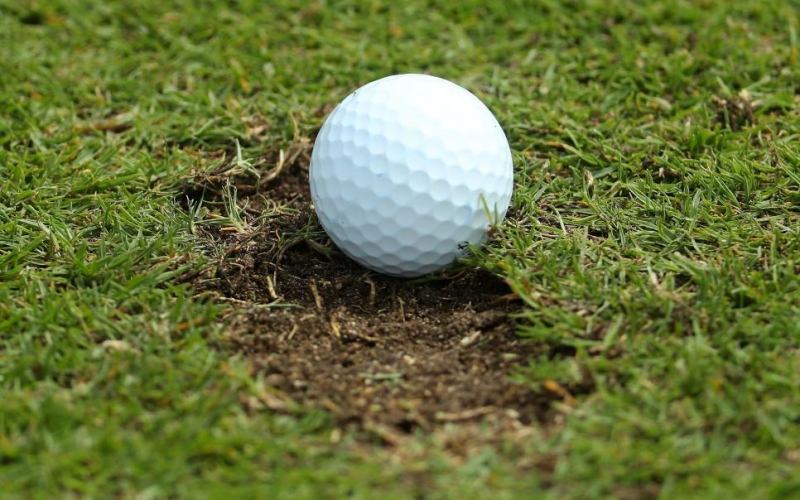 By E. Michael Johnson
For the past two years, we’ve brought you our 13 dumbest things in golf and 13 (even more) dumbest things in golf. These collections of abominations of the golf soul were designed to educate and inspire debate. Of course, we all know there is no shortage of fodder for such things. Golf is a wonderful sport, but by its complicated nature, it lends itself to the absurd. And gosh, there are seemingly an endless amount of those absurdities. We are back with another 13 items that need to be changed, ignored or simply laughed off. Only one thing about this list is certain: Even this third instalment won’t cover everything.

Having to play a ball from a divot in the fairway
You’ve ripped the tee shot down the middle and your playing companions admire it with comments along the lines of, “That’s only good if you like perfect!” Except it’s not. Some dumbass before you took a divot the size of Montana and failed to replace it or fill it in with divot mix, leaving you muttering WTF and cursing your bad luck. The USGA has done a solid job in trying to make the rules fairer and easier to understand but failing to include a divot as “ground under repair” is a failing in need of fixing. Like yesterday. 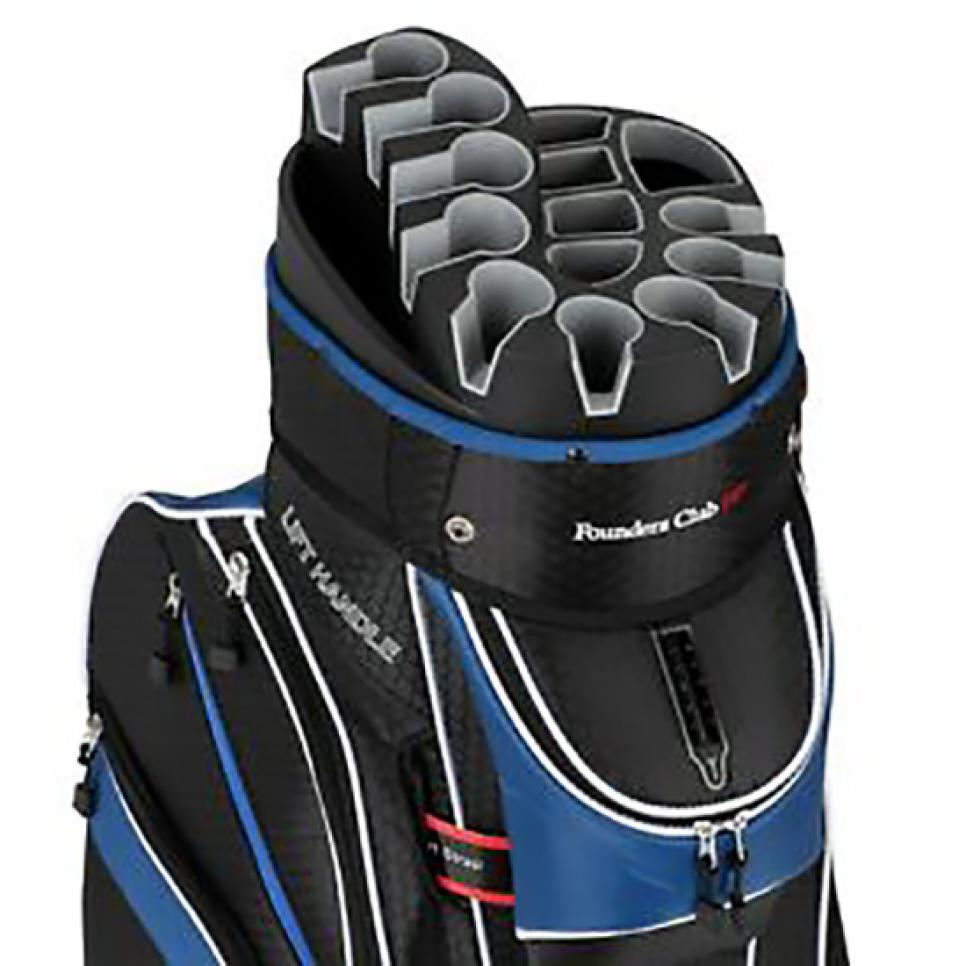 I know I’ll get roasted for this one and I simply don’t care. As I said once before, bag companies tout these abominations of humanity by stating how much wear and tear they’ll save your clubs. We’re sorry, but we don’t need to coddle implements that we strike into the ground and into a hard ball at close to 100 miles per hour with regularity. Plus, how can you slam your club back into your bag after a poor shot when you have to have pinpoint accuracy to do so. Give me an old-fashioned five-way divider any day.

Cosying up to the beverage cart girl 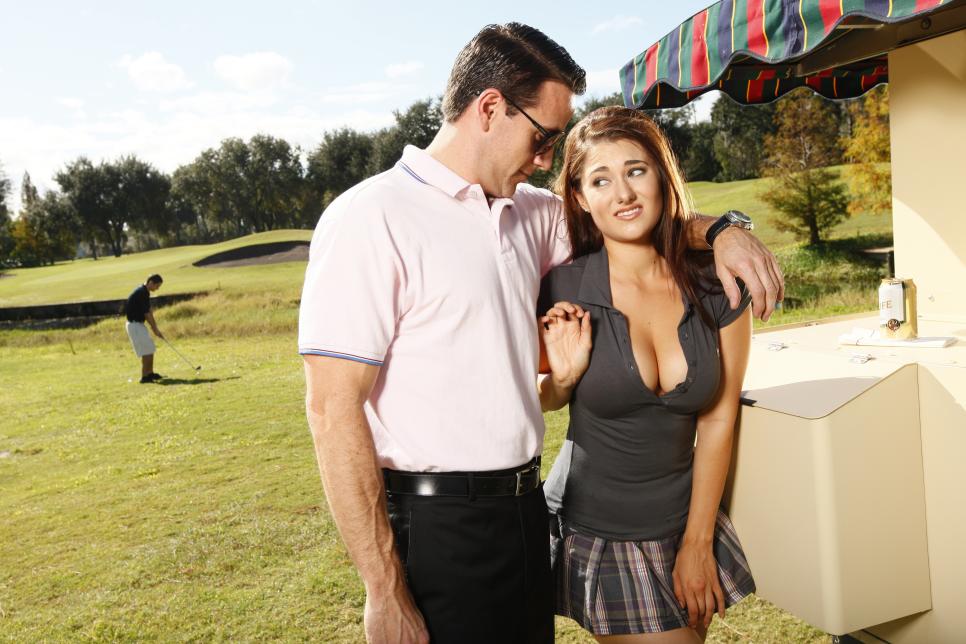 Yes, you’re absolutely right. That lovely 20-something young lady is absolutely in love with your 40-, 50-, 60-something pot-bellied self. Yeesh. It is perfectly fine to be polite and engage in conversation, but stop the overt flirting tactics and realize that $10 tip you dropped in order to impress her is as useful as setting money on fire. Stop being creepy, order a drink, chat for a moment and drop her a couple of bucks for the effort. Proper, as the Brits might say. 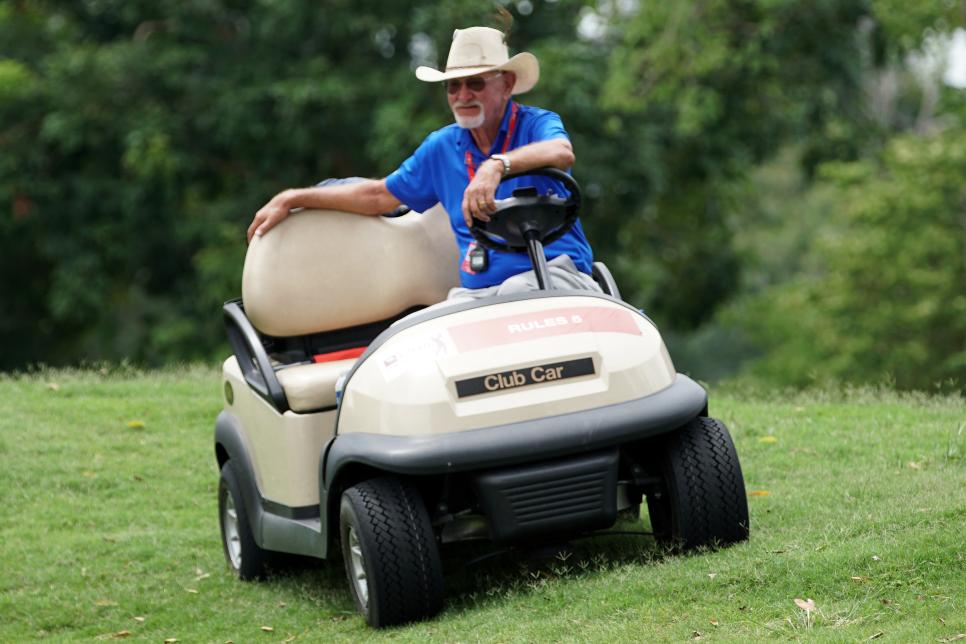 While we all love the beverage cart girl, we despise most rangers. Why? Because they tend to do absolutely nothing to help speed up play. They tend to drive up and say, “Everything OK?” before speeding off like Jimmie Johnson before you can utter a reply of protest. A number of years ago at a course in the Myrtle Beach area my group stood on the seventh tee close to two-and-a-half hours into our round. Flagging down the ranger, he had the audacity to say, “Yeah, little bit of slow play on the back nine holding things up.” Well, thanks for nothing.

Playing muscleback blades
Sure, they look sweet in the bag. Problem is, they’re strictly for those who have a reserved parking spot at next week’s PGA Tour event. For the game’s elite, they certainly have a place. But if you’re a 5-handicapper who plays closer to a 10, you’re better off using these clubs as a fire poker. They’re not just for players, they’re for play-uhs.

Trees in the middle of the fairway 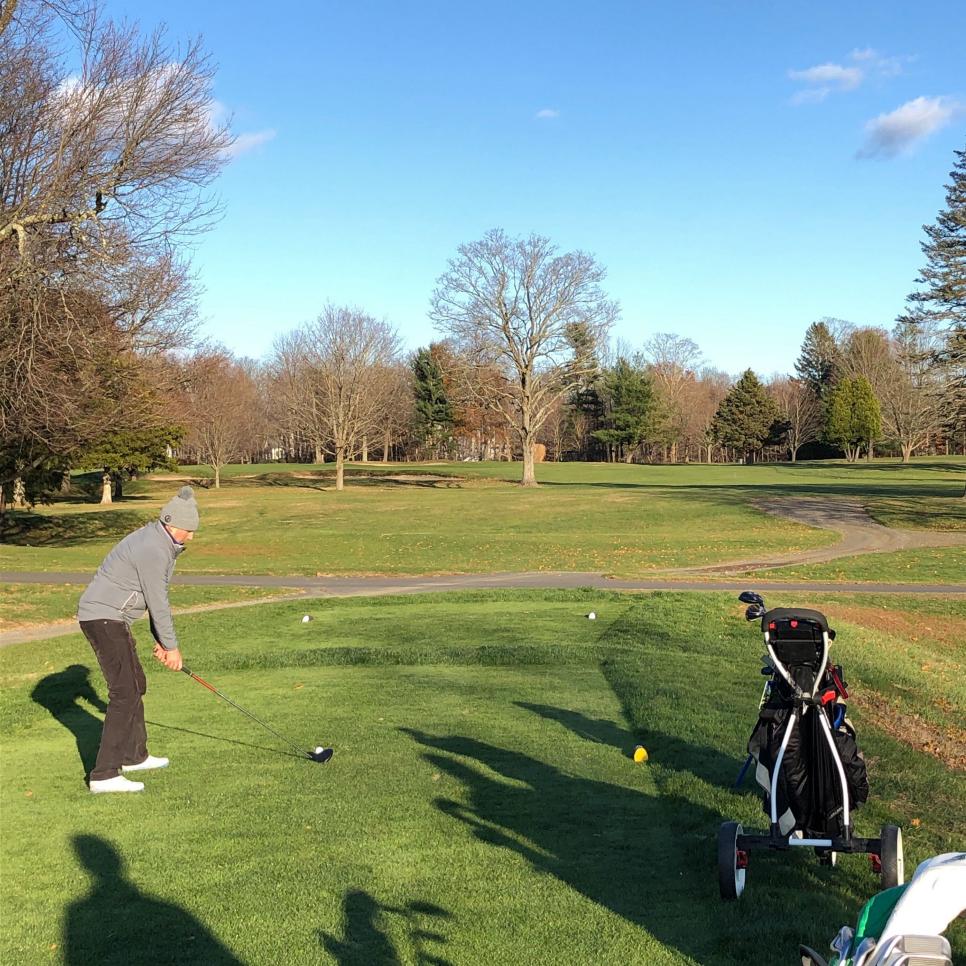 I know, I know. Pebble Beach has one on its 18th hole. TPC River Highlands on its 10th. These are PGA Tour courses and there’s probably about 100 other courses (including my home club) that have them as well. Congratulations. When this “architectural trait” is employed at so few courses it’s just plain dumb, bordering on jackassery. I see no reasonable argument for a well-struck shot to be so heavily penalized. I love trees. Just stay off my lawn—especially when that “lawn” is the fairway in the direct line of a perfect tee shot.

Drinking too much on the course 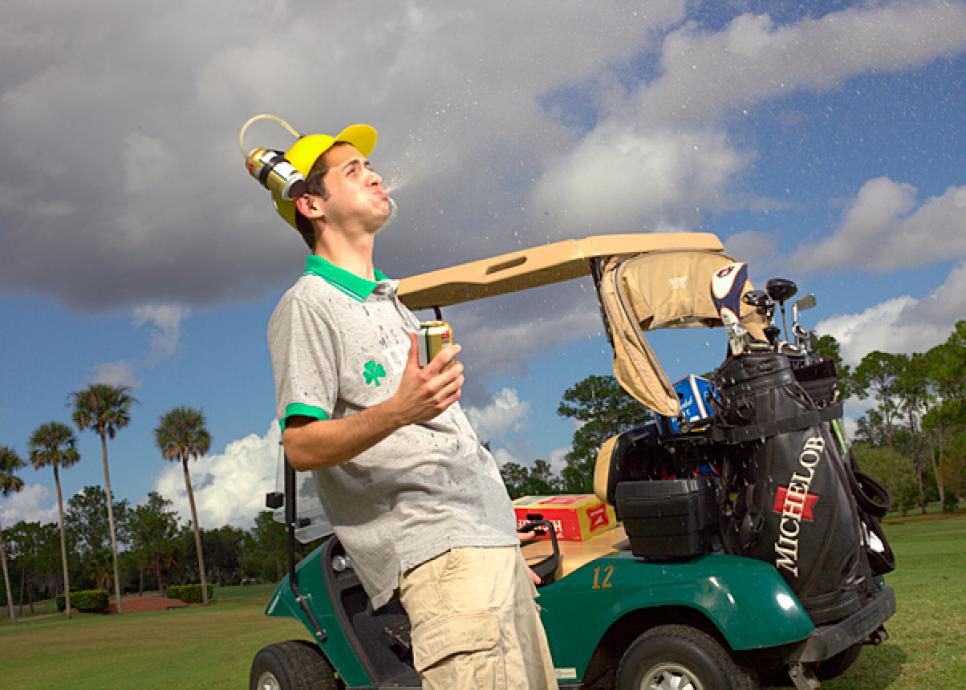 I love golf. And I definitely love drinking. I just don’t get the appeal of combining the two when it leads to excess of the latter. Yes, golf is social. But it’s a game of the mind as well and it’s hard to think through your shot clearly when the brain is more than a little foggy from the booze. It’s four to five hours, folks. You don’t need a 36-pack of Hamms to make it through it no matter how bad your game is. Not only will your score thank you, but you won’t have to apologize to a bunch of people for your behaviour the following day.

Not hitting a provisional
What is wrong with you people? You snapperdoodle one so far left Bernie Sanders can’t find it and yet you refuse to hit a provisional. OK, the new USGA rules provide some latitude, but pretty much everywhere I play OB and lost ball rules apply. There’s no bigger walk of shame in golf than trudging back to an already occupied tee to hit 3 after the three-minute search turns up nothing. Besides, even if you think you will find your original don’t you want another swipe to get the bad vibes out before the next tee?

A high-dollar resort course charging for a course layout booklet
You’re eager to take on that high-priced resort course you’ve read so much about. And as any good golfer would, you want to be prepared. After plunking down several hundred for the green fee, you grab the yardage book only to be told, “That’ll be $10, please.” Excuse me? This is the kind of dumb move that drives people insane. It’s like paying $1,000 for a foursome at a charity event and being charged for the hamburger at the turn. It’s irritating—and unnecessary. Just add the cost into the green fee. You’ll still get your dough and the golfer feels like he got a freebie. Win-win.

Being in between clubs—and hitting the shorter one
A few years ago after my pro watched me get beat in the club championship finals for a fifth time, he said, “I noticed you coming up short a lot today.” I replied that with all the trouble over the greens I didn’t want to go long. His counter to that logic has stuck with me ever since: “Why don’t you go long a few times before being afraid of it.” It makes sense. In most instances you truly have to flush it to go long or even reach the back of the green. And be honest, you—and I—don’t flush it very often. 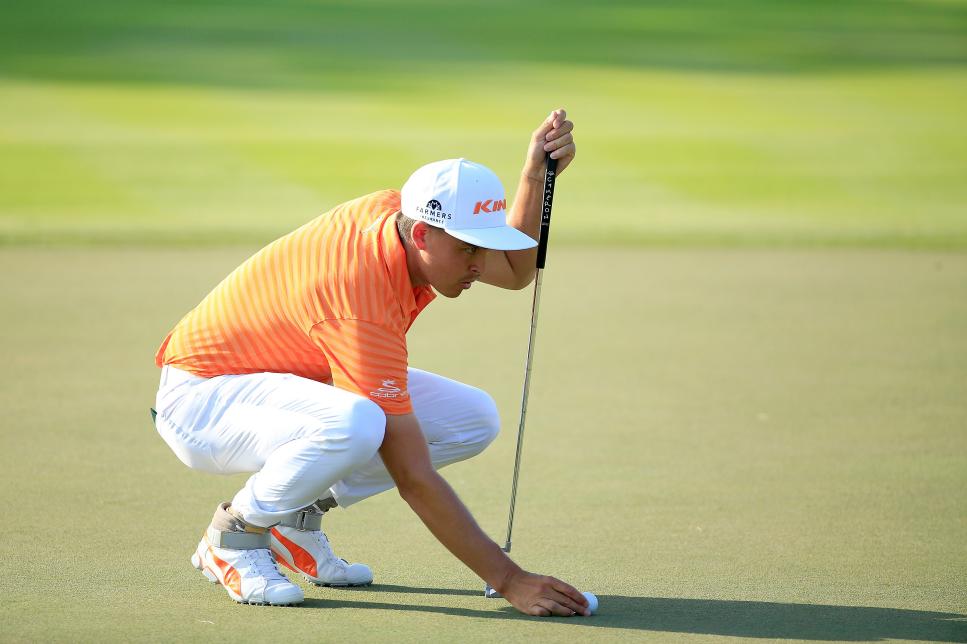 I’ve done a 180-degree turn on this one. Not for the tour, mind you. I still believe in long pants for the pros. But for everyday players, let’s take it down a notch. Dress codes have been relaxed in offices for years. Churches are “come as you are.” Parents wear pajamas to the bus stop. Maybe the time has come to relax restrictions on untucked shirts, cargo shorts and socks with sandals. OK, the last one should still be illegal. Permanently. 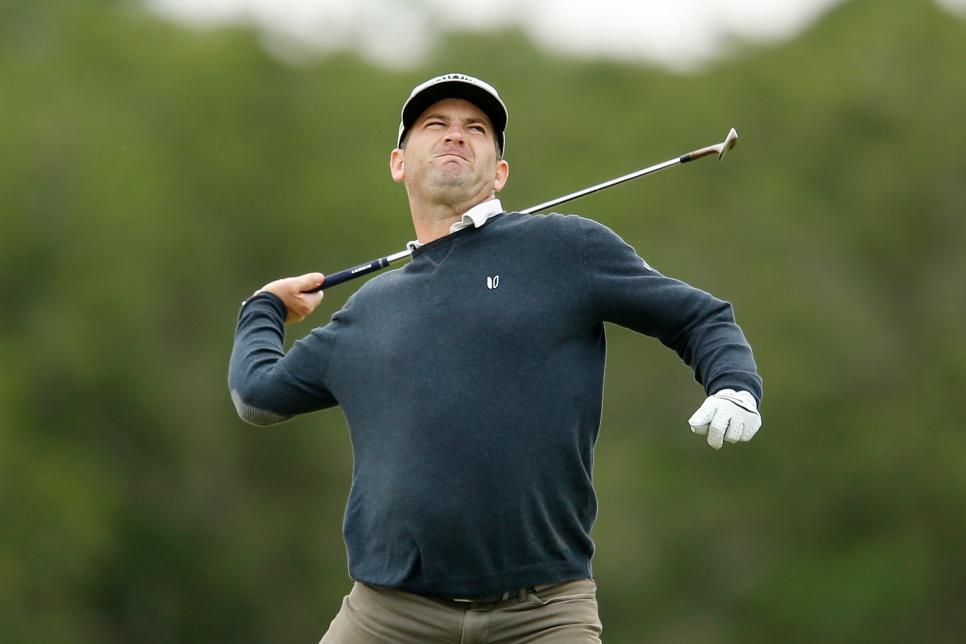 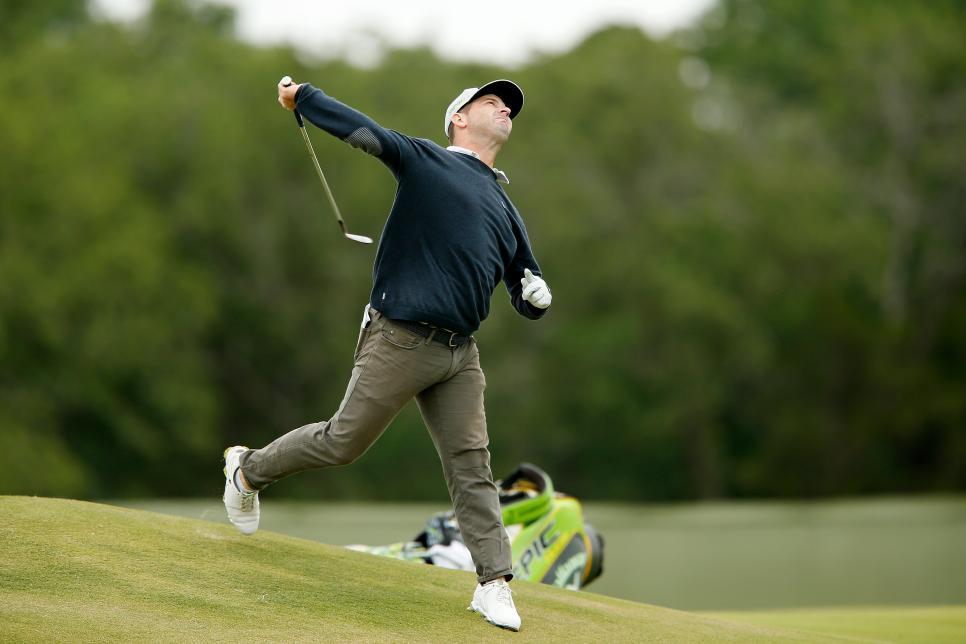 Although guilty of this in my youth, we all know it’s simply not cool to toss clubs. It’s dangerous, it’s silly and when said club breaks, finds a tree or goes in a pond no one is going to feel sorry for you. Nothing drags the vibe of a foursome down more than some jerkweed winding up and letting it fly. And face it, you’re not good enough to whirlybird clubs unless you have the game of Nicklaus. And we don’t mean Bill Nicklaus.

Chippers
Don’t. Just don’t. The short game can’t possibly be that bad. OK, it can be that bad. But better to chunk, skull, double-hit, etc. and still maintain a shred of some self-respect. Carrying a chipper is like having a ball retriever—the benefit is simply not worth the ridicule. Its mere presence in one’s bag is to reveal the lack of a golf soul. We mean it.

Tags13 more of the dumbest things in golfgolf