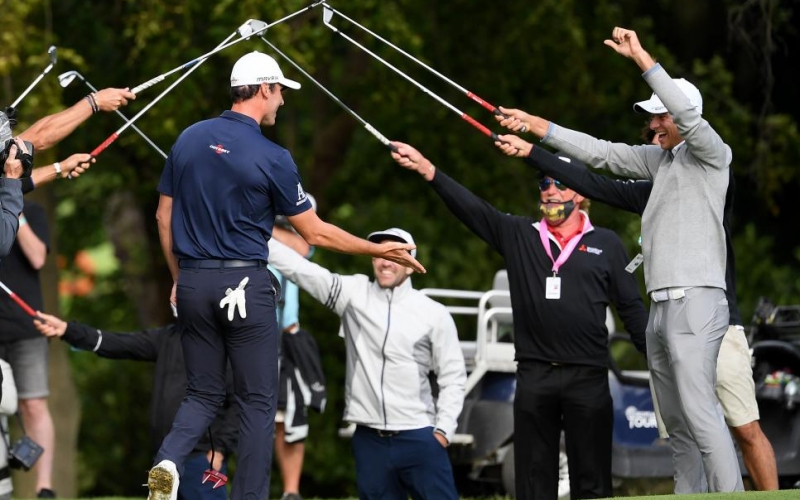 RK
Renato Paratore receives a guard of honour from fellow European Tour professionals after winning during final round of the British Masters.

By John Huggan
Only 19 centuries or so after the 73-mile long Hadrian’s Wall was built to signify the northwest frontier of the Roman Empire, another native of the Italian capital has left his mark on the northeast of England.

With a final round of two-under-par 69 for a 72-hole total of 266, 18 under par for four circuits of the Close House course just outside Newcastle, Renato Paratore made off with the British Masters title. The 23-year old finished three shots clear of the highly promising Dane, Rasmus Hojgaard, with Justin Harding of South Africa third, one stroke farther back.

In nice touch at what was a spectator-free event, a group of Paratore’s fellow players formed a guard of honour with clubs raised in salute as he left the 18th green. And after an interview with Sky television, the world No. 270 was able to say hello via video link with his delighted mother back in Italy.

“I’m just really happy,” was Paratore’s immediate reaction to a victory even his all-conquering ancestors would surely have been pleased with. “I played really solid. I didn’t except to play this well so soon after the lock-out. But I have worked really hard over the last year.”

Indeed, it was a fine performance of some solidity from Paratore, whose only previous victory on the European Tour came at the 2017 Nordea Masters. Bogey-free over the first 64 holes, he made 20 birdies in all [only six of those on par 4s]. But his final round was not a totally stress-free day out in the picturesque Northumberland countryside. Standing on the 198-yard par-3 12th tee—statistically the most difficult hole on the course—Paratore had dropped two shots in his previous three holes and his lead was down to two. He passed the test, though, his long-iron [remember them?] tee-shot into the strong breeze finding the centre of the elusive putting surface en route to a steadying par. 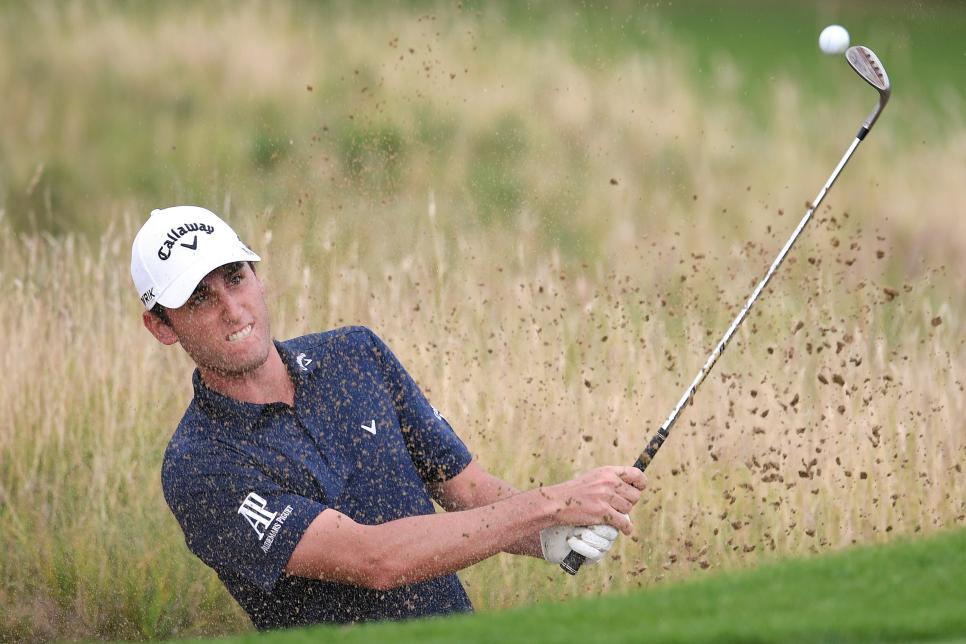 RK
Renato Paratore plays his third shot from the 17h greenside bunker during final round of the British Masters.

“I didn’t think too much about not making a bogey for so long,” he claimed after moving up to sixth place on the season-long Race to Dubai. “If I did that, I would probably make one. So when it did come, I wasn’t too worried. The ninth hole was very difficult today because of the wind. Besides, I made birdie at the very next hole. My aim was just to play good and win the tournament. That conditions were tough helped me, of course. There were no really low scores. And I was playing well. So my focus was simply on staying ahead.”

That he did, early on courtesy of a deft short game. Having missed each of the first two greens in regulation, the fast-moving Italian—no one in the modern game takes less time to play—chipped close on both occasions.

Perhaps the only other moment of high stress was answered equally emphatically. Faced with a 15-foot putt for a birdie 4 on the penultimate green that would maintain his three-shot edge, Paratore—who putts with his glove on—holed out dead centre. It was a pure stroke worthy of the animated celebration that followed.

Still, while Paratore’s play over the four days was worthy of much praise, the field the Italian left in his wake was far from the strongest ever seen on the European Tour. In a sign of what will likely be at least the short-term future, only four of the top-50 finishers—Harding, defending champion Marcus Kinhult, Andrea Pavan and Eddie Pepperell—arrived at Close House ranked inside the world’s leading 150 golfers. And only two of Wednesday’s starting lineup, Pepperell and tournament host Lee Westwood, could boast rankings inside the top 85.