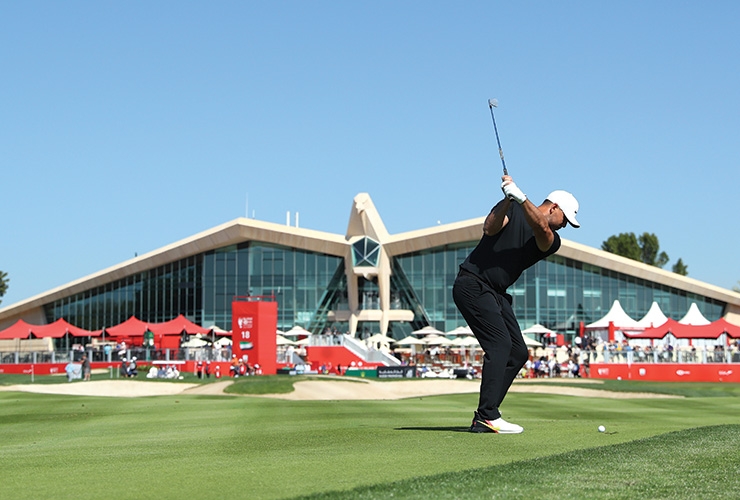 Warren Little/Getty Images
Koepka plays his second shot on the 9th hole during the opening round of the Abu Dhabi HSBC Championship on January 16, 2020,

By Kent Gray
If Brooks Koepka’s peers were secretly hoping the world No.1 would slowly ease his way back into competitive golf and leave them to scrap it out for the Falcon trophy this week, well, they should have known better.

A bogey-free 66 represented a fine return after three months out rehabbing his surgically repaired left knee. It left the 29-year-old American just two shots adrift of -8 pacesetters Renato Paratore and Shaun Norris and ominously poised at the 15th Abu Dhabi HSBC Championship presented by EGA. So much for ring rust.

“I’ve kind of known I’ve been hitting it really well, putting it really well for a couple of weeks,” said Koepka after his fastest start to the $7 million Rolex Series event after a 77 when he missed the cut here in 2014 and a 67 en-route to a T-9 finish last year.

“I think the first day I picked up the club, same thing. Felt like I hadn’t left. I’ve done it for years and years. You don’t forget how to swing the golf club.”

Apparently not. Koepka wasn’t flawless off the tee but managed to escape an awkward, partially (tree) impeded waste area lie at the first real hint of trouble on the 6th, his fourth to last hole after starting on 10. Throughout he relied on some silky touches around the greens, normally the last part of your game to return after such a lengthy spell on the sidelines, as he sauntered around the pristine National layout and up the front page of the leaderboard.

The highlight was a chip-in birdie on the 17th, his 8th hole, from some gnarly rough beyond the green, before another gain from out of a greenside trap at the next to turn in four-under. A lengthy putt for another birdie on the 2nd, his 11th hole, also made the highlights reel.

“Yeah, solid. I like the way I’ve played,” he said. “Controlled distances. Controlled flights. Controlled spin. Everything. That’s exactly what you want to do. Felt good to be back out playing, just feeling the competition again. I’m pretty pleased with it.

“To chip one in there, I wasn’t expecting that, but my short game was really good. The strike was really good. I worked hard with Pete [Cowan] in trying to make sure that I know what I’m doing, and understand what I’m doing and can make it repeatable.”
Koepka clearly seems to have Abu Dhabi Golf Club, with its lengthened 11th and 16th holes, sussed even if his driver wasn’t fully co-operating.

“Some of these fairways are like 12 yards wide, so I’m not really expecting to hit them,” he said. “But when you know where the pins are at, you can kind of play the hole backwards and figure out if you can be aggressive off the tee and hit driver…sometimes it pays off to have that lob wedge, even when it’s in the rough, and other times you’ve just got to lay it back. You’ve got to understand the golf course and really how to play it.”

1st competitive round for 89 days.

As a statement of intent for the busy year ahead, Koepka’s opening round of 2020 was mightily impressive. Perhaps the only question mark now is how his knee pulls up overnight even if there were no concerns immediately after his opening gambit.
“I feel fine physically. I’m out of shape but…,” he said before being interrupted.

“You don’t look out of shape?”

“Well, it takes a little bit to get in golfing shape. You stand on the putting green for 30 minutes and putt and your back starts to ache. Just little things like that. But it will be fine. Only take a couple more weeks.”

It’s scary to think how he might play once he’s back up to full fitness.

“I’m excited and it will be nice to be able to practice again. I haven’t been able to practice; last year, I just couldn’t practice. It was too painful and wasn’t being able to do the things I wanted to do.

“I told my team in the last year, I was just going to really rededicate myself for the next five, six years, and we’ll see where we are. From there, you know, who knows, other things might be a priority.”

Who knows what Koepka’s record might eventually look like. One round doesn’t make a tournament, much less a season, but on the early evidence, don’t be surprised if 2020 Abu Dhabi champion is part of the legacy.