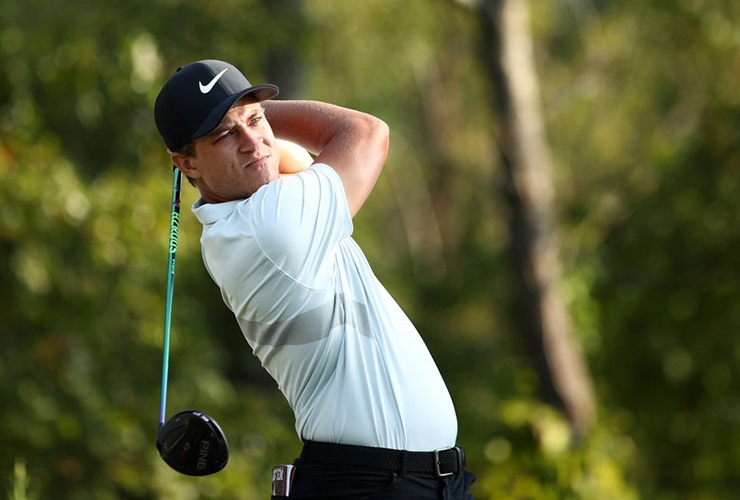 JACKSON, MISSISSIPPI – SEPTEMBER 20: Cameron Champ of the United States plays his shot from the 15th tee during a continuation of the first round of the Sanderson Farms Championship at The Country Club of Jackson on September 20, 2019, in Jackson, Mississippi. (Photo by Marianna Massey/Getty Images)

By E. Michael Johnson
Cameron Champ won his second career PGA Tour title at the Safeway Open and did so in pretty much the manner one would expect: using his considerable length off the tee to set up the rest of his game.

Champ ranked first in distance (337.1 yards), longest drive (371 yards) and strokes gained/off the tee (6.157 strokes better than the field). More importantly, when he needed it most, Champ unleashed a 369-yard laser off the 18th tee that split the fairway, eventually leading to a winning birdie after Adam Hadwin, playing in the group in front of Champ, tied him with a birdie on the same hole.

Proving that he’s not just a bomber and nothing else, Champ also led the field in scrambling with his Ping Glide Forged wedges and 60-degree TaylorMade Milled Grind Hi-Toe wedge. He also was T-7 in greens in regulation with his Ping Blueprint irons.

“I’ve always been a blade-iron guy, so I was very happy when Ping came out with these,” Champ told Golf Digest last year. “I was very excited when I got these and the feedback they provide is tremendous. When you hit a blade it’s a different feel than something with more forgiveness. It’s also a cleaner look, much thinner on top. That was what I was looking for in an iron.”

Champ also knows what he likes to look at on the greens. “I’ve always been a mallet guy,” said Champ, who used the same 34.5-inch Ping PLD Prime Tyne putter with two degrees of loft that he used to win his first event at the Sanderson Farms Championship in 2018. “When I was on the Web.com Tour I went back to a mallet. I’m not sure what it is, but I’ve always liked mallets better. I like more of a heavier putter. I have a long and slow-paced stroke and something with a little more weight matches up well with that. It allows me to be more consistent.”

Consistent enough to hole a nervy final putt for his second PGA Tour win in as many years.

What Cameron Champ had in the bag at the Safeway Open