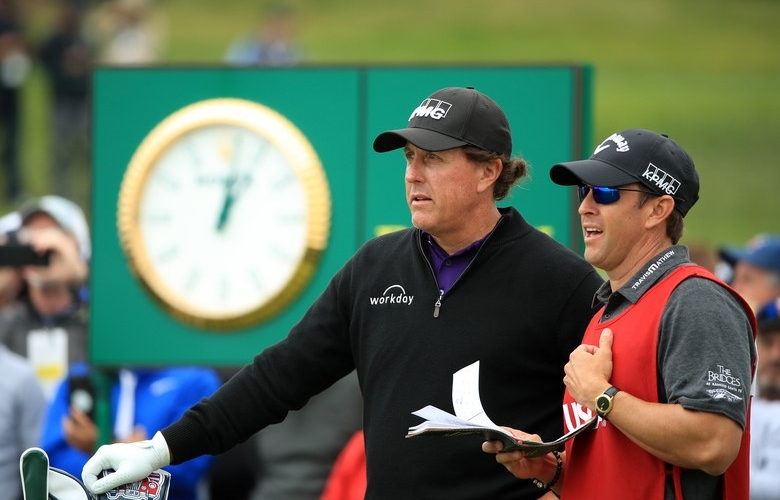 Andrew Redington
Phil Mickelson will tee it up at a very familiar place this week. He’ll just have a less familiar face caddying for him.

By Alex Myers
Tim Mickelson announced on Wednesday he won’t be on his big brother’s bag at the Genesis Invitational when play starts on Thursday morning at Riviera Country Club. But don’t worry, there’s no internal strife among the siblings, just a bit of wear and tear on the looper.

Due to a couple lingering injuries, with Phil’s blessing and encouragement I’m taking this week off from caddying to rest and recover. Andrew Getson will be on the bag this week for me. Gotta be healthy for the ‘majors’ stretch coming up soon.

Filling in for Tim is Andrew Getson, who has been Phil’s swing coach since the end of 2015. Here’s a photo Phil posted earlier this year that shows Tim (centre) and Andrew (back-centre):

Awesome first day back. Dave and Eddie Pelz, Andrew Getson, and my brother Tim all together to help me build a solid foundation for my game this year. I am ready to work hard and play some great golf again. ?️‍♂️? #hitbombs #attackpins

Tim has been Phil’s caddie since the five-time major champ and longtime looper Jim (Bones) Mackay parted ways in 2017. Tim, who was Jon Rahm’s agent at the time after stepping down from head coaching duties at Arizona State the previous year, was originally a temporary replacement before being named his brother’s full-time caddie at the end of 2017.

After a rough start to 2020 with back-to-back missed cuts at the American Express and the Farmers Insurance Open, Mickelson finished T-3 in Saudi Arabia and third at Pebble Beach last week. Those two finishes have moved him up to No. 55 in the Official World Golf Ranking (from No. 86), but the 49-year-old still has work to do to qualify for this year’s U.S. Open and the four World Golf Championship events.

Regardless of who is on Mickelson’s bag, it wouldn’t be surprising to see him accomplish that this week. Mickelson has two wins and two runner-ups in 18 career starts at Riviera.