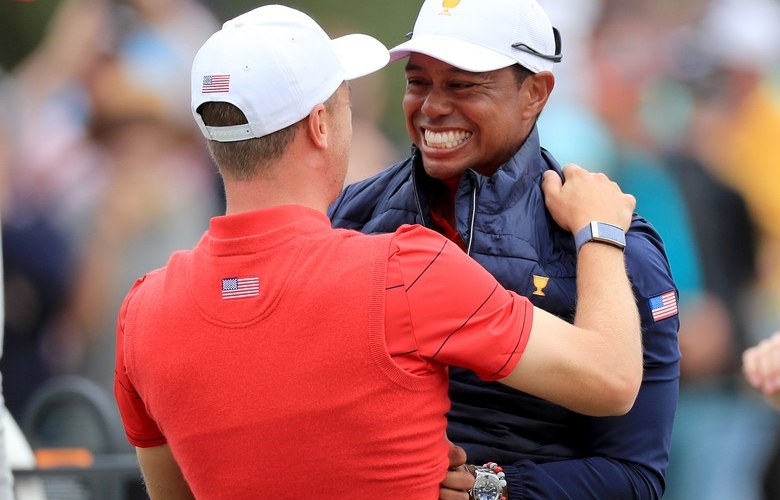 David Cannon
Tiger Woods is embraced by Justin Thomas as they celebrated the Americans’ 16-14 win in the 2019 Presidents Cup.

By Alex Myers
Tiger Woods will be looking for a first win at Riviera Country Club this week and a record 83rd PGA Tour title. First things first, he’ll need to get past Justin Thomas.

For a third consecutive year, Woods will play alongside the 26-year-old American the first two rounds of the Genesis Invitational. And the pairing hasn’t gone well for the tournament host the first two times.

In fact, Thomas’ head-to-head dominance of the 15-time major champ has extended to other events. In his first 13 times being paired with Tiger, Thomas won 10 times, tied three times and never lost. On the bright side for Tiger, that streak was snapped the last time they were paired in the final round of December’s Hero World Challenge when Woods shot 69 to Thomas’ 70.

Woods, 44, made his PGA Tour debut at Riviera as a 16-year-old amateur in the 1992 Los Angeles Open. He also played in the event the following year, missing the cut both times. As a pro, the iconic venue is one of the few courses Woods hasn’t won, coming closest with a T-2 in 1999.

Paired with Woods and Thomas the first two days is Steve Stricker. The 2010 winner at Riviera turns 53 later this month.

Despite their age gap, Woods and Thomas have become good friends in recent years. And as Presidents Cup playing-captain, Woods twice paired himself with Thomas and the duo went 2-0 during the U.S. win.

Now as tournament host, Tiger clearly chose two of his buds to play with Thursday and Friday. But we’re guessing he’s also hoping the third time is the charm when it comes to taking Thomas down.