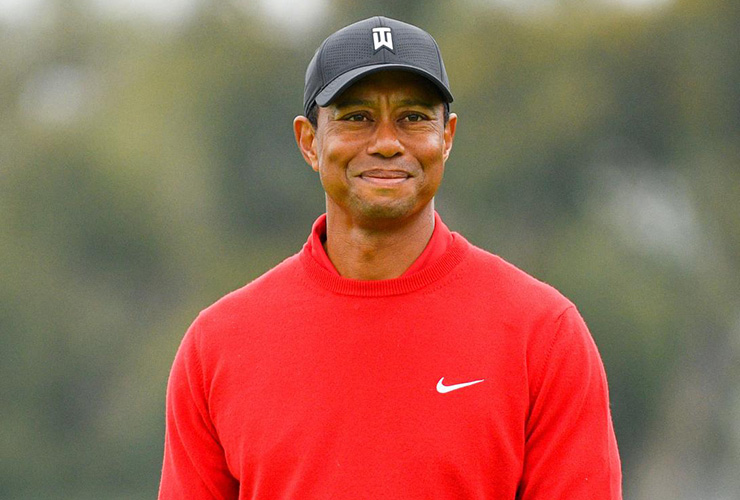 By Dan Rapaport
Tiger Woods provided an honest and somewhat sobering update on his recovery from a February car accident—and his potential golf future—in an exclusive interview with Golf Digest on Monday.

“I think something that is realistic is playing the tour one day—never full time, ever again—but pick and choose, just like Mr. [Ben] Hogan did. Pick and choose a few events a year and you play around that,” Woods said during a Zoom interview with Henni Koyack from his South Florida home. “You practice around that, and you gear yourself up for that. I think that’s how I’m going to have to play it from now on. It’s an unfortunate reality, but it’s my reality. And I understand it, and I accept it.”

Golf Digest writers weigh in on Tiger’s interview and assess what’s next for Woods and his legacy.

Watch the complete video interview below:

What are your overall impressions from the video and how Tiger looked?

In comparison to his last televised interview during the broadcast of the 2020 Genesis Invitational at Riviera, which yielded some not-so-great speculation from the Golf Twitter world, Tiger looks phenomenal. Which is to say he looks like his normal self. Seeing him smiling and laughing at his own corny dad jokes (the “maternity leave” one was great) gives me hope for the future. And by the future, I mean his off-the-course, non-golf related future. —Christopher Powers

Tiger looked great, and it was fantastic to simply see and hear from him after so many months away from the spotlight. From discussing his own physical status to his son’s golf game, he seemed pretty open and honest with his answers, which as we all know hasn’t always been the case. Overall, he seemed genuinely happy despite the questions around his playing future. And golf fans can be happy that he expects to attempt a PGA Tour comeback—even if he’s being cautious about when that actually takes place. —Alex Myers

There are a handful of remarks that some will gravitate to, and in a vacuum those remarks paint the interview in a melancholy light. While Woods hit those notes at points, I really felt his tone ran off a current of cautious optimism. —Joel Beall

So we can pump the brakes on any talk of him playing in the Masters, right?

Anyone who seriously thought he’d be ready for the Masters THIS April was living in Looney Tunes-ville. If he ever plays in a Masters again, be it in 2023 or 2050, I’ll consider it a miracle. —C.P.

One million times yes. And even if he somehow plays with Charlie at the PNC Championship next week, we must not mistake that for evidence that he’s ready to compete on the tour. Playing in a hit-and-giggle, where there is no rough, on a flat course in Florida, where you can pick up after a couple bad shots, where you don’t have to hit tee shots, where there are only two rounds … it’s a long, long way from the PGA Tour. And Tiger is so competitive, I can’t see him teeing it up until he believes he can feasibly make the cut. That’s not going to happen anytime soon given his lack of endurance. —Dan Rapaport

Yes, that seems pretty far-fetched at this point. Sure, there was plenty of hype around the recent swing video he posted, but it now appears Tiger wanted to share that because of how content he is to be hitting golf balls anywhere at this point after having to be pulled from that car wreck nine months ago. I would imagine he will still go to Augusta for the Champions Dinner. And even if he’s not teeing it up come Thursday, how cool would it be for him to play Wednesday’s Par 3 Contest with his kids? —A.M. 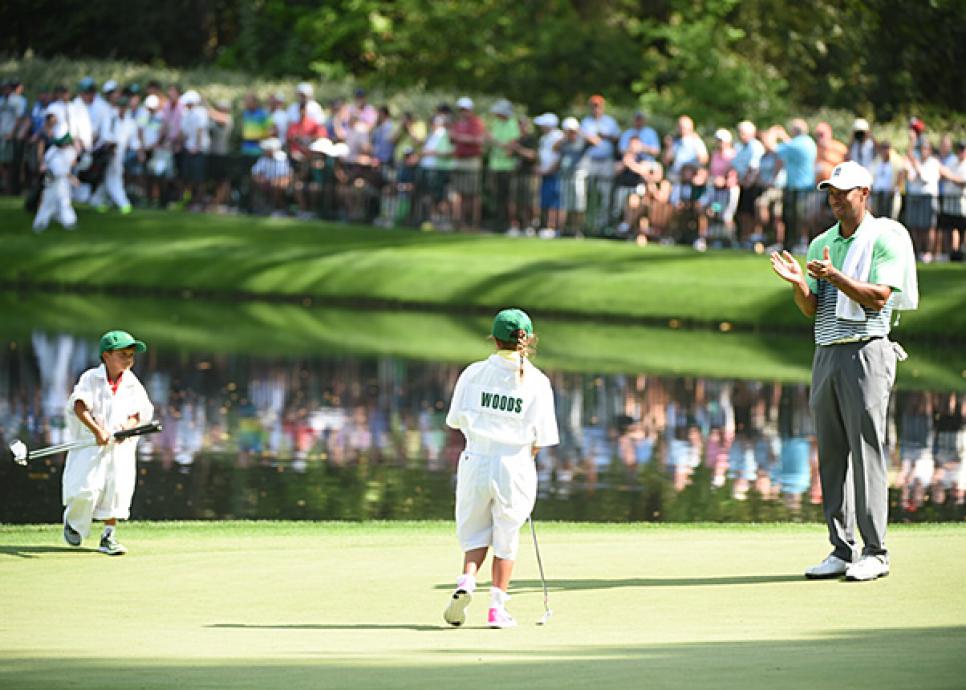 Donald Miralle
Maybe Tiger won’t be ready to play in the Masters in April, but what about the Par-3 Contest like he did in 2015?

Were you surprised how candid he was about the fact that his days as a full-time touring professional are over?

Maybe this is the golf fan in me talking, but I do wonder if Woods is erring on the side of managing expectations when talking about his future. Knowing what we do about him, once he plays a little bit of tournament golf, it’s going to be hard for him to stop there. Again, maybe that’s just wishful thinking, but I do think it’s much easier for him to establish at the outset not to expect much, and then see if he can prove himself wrong. —Sam Weinman

Those comments are going to gain more traction than they should, because Woods has essentially been a part-time player for some time. Of greater consequence was Woods tempering expectations on his play in those limited appearances. Because there’s a difference between part-time player and ceremonial player, and it sounds like Woods is preparing his fans to not be surprised if he trends towards the latter. Which, frankly, is a position he’s been trending towards since his win at the Zozo in 2019. —J.B.

If this was six or seven years ago, even after all his injuries and surgeries, yes, I’d be absolutely flabbergasted to hear him say his days as a full-time tour pro are over. Now? Not all that surprised given A) He’s certainly gotten a bit more candid in his old age when it comes to questions like this, and B) He almost died in a car accident. I’ll repeat, if we ever see him tee it up again it will be a miracle, and I’d honestly venture to say it would be a more impressive comeback than his 2019 Masters win. —C.P.

Very. Again, it’s a profound difference to his comportment in years past and wonderful to see. Still, that doesn’t make it any less sad. —D.R.

A huge question, but this feels an appropriate time for a 30,000-feet view: If Woods never wins another tournament, what will his legacy be?

Where to begin … simply put, an all-time icon of sports. Ali, Jordan, Ruth-level. A transformational figure who, for 25 years, was golf. He single-handedly dragged a sport from the stodgy, all-white country-club era into modern relevance. A complicated figure, but one of the most influential of the last 100 years. —D.R. 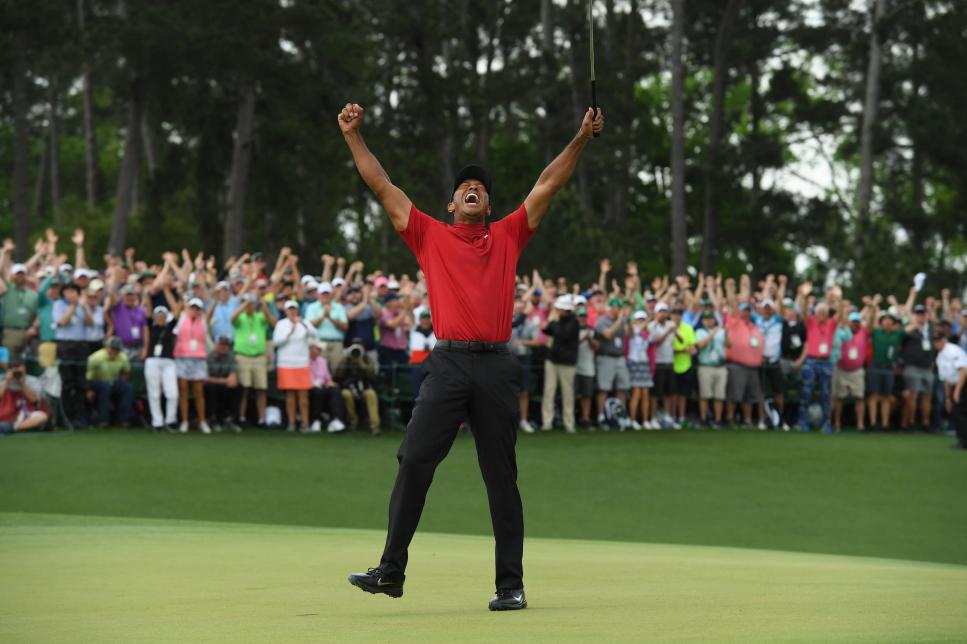 J.D. Cuban
Tiger celebrates on the 18th green after closing out his 2019 Masters victory.

There will always be some “what ifs” with Tiger based on how much time he’s spent retooling his swing and recovering from injuries during his career, but his legacy won’t take a hit here. Woods long ago established himself as the most dominant force the game has ever seen, and his win at the 2019 Masters only cemented his place as one of the all-time toughest competitors in any sport. Adding another incredible chapter to that legacy would be just that: incredible—but certainly not necessary. —A.M.

The easy, surface-level answer is to say his legacy was secured and cemented at the 2019 Masters. That’s not quite true; as we’ve seen with other athletes, politicians, celebrities, etc., the past can be tarnished by the present. People have been trying to summarise Tiger’s legacy for the past decade without realizing the story continues to be written. The last nine months have seemingly solidified that wins may no longer be part of that story. Yet, after what he’s suffered, what he’s gone through and what still lies ahead, that it’s a story that remains unfinished is a victory in itself. —J.B.