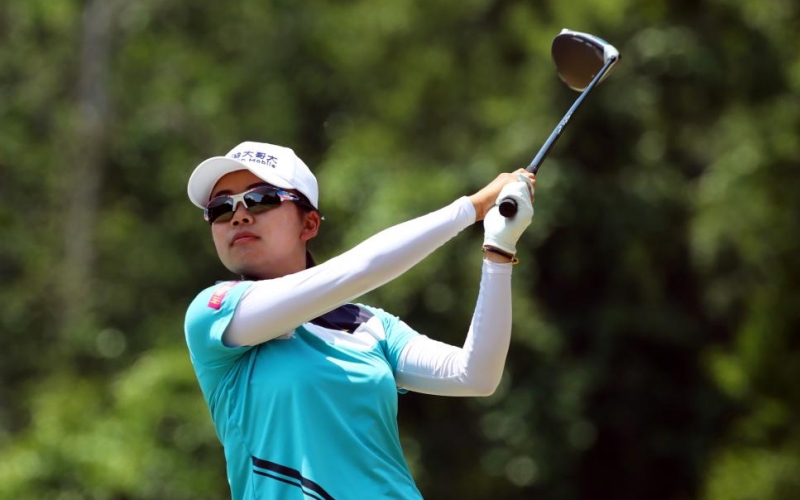 By Kent Paisley
It has been a hectic recent travel schedule for Wei-Ling Hsu. She flew from the Honda LPGA Thailand to Los Angeles to pick up her Mom to drive to Phoenix for a U.S. Women’s Open qualifier last Monday. She won a playoff for the first alternate spot at Superstition Mountain Golf Club last Thursday, and came to Williamsburg, Va., bleary-eyed.

Then the seven-year LPGA veteran played through her slumber and won the Pure Silk Championship on the River Course at Kingsmill Resort on Sunday to achieve her lifelong dream of winning on the LPGA Tour for the first time.

“I thought to myself that I been wait for seven years, I don’t want to wait anymore,” Hsu said, fighting off tears.

The lead turned like a carousel throughout Sunday, with Hsu, Moriya Jutanugarn, and Jessica Korda taking turns atop the leader board. Jutanugarn emerged from the pack with a two-shot lead after back-to-back birdies on the 13th and 14th. The lead remained two after the 15th, the last par five. Then it flipped in a four-shot swing from Jutanugarn to Hsu.

Jutanugarn drove it into the fairway bunker on the left side on 15. It did not seem problematic, but Jutanguarn made it so after catching the lip with her second. She wedged out with her third. A three-putt from 30 feet compounded the mistake for a double bogey on the easiest hole of the week.

“I [didn’t] hit a good drive and it went into the bunker. Maybe I just catch it a little too thin,” Jutanugarn said about her bunker shots. “The sand was so soft and fluffy, it came back down and not a very good lie, I had to chip out.”

Hsu found the fairway off the tee and stuffed her fairway wood to about three paces to the flag on the 473-yard hole, then made eagle.

The 108th-ranked player in the world rolled home the eagle putt to wrest the lead and rip away the possibility of the third time in LPGA Tour history sisters would have won on back-to-back weeks, after Ariya Jutanugarn’s victory in the Honda LPGA Thailand.

Hsu added a birdie on the 16th and an emphatic fist pump for par on the 17th and win at 13-under par 271. Hsu’s victory is particularly meaningful given her native Taiwan is under lockdown with no sports due to an outbreak of Covid-19 cases. Her friends bombarded the 26-year-old over night with encouraging messages through Facebook and Instagram after the third round.

Hsu also gets into the U.S. Women’s Open field, which she was most excited about after her victory. Hsu has played in it every year since 2014 except for 2020, when she stayed in Taiwan due to the pandemic. She has played six consecutive weeks with her qualifier last week and can play the following two LPGA events, including the U.S. Women’s Open.

She’s unsure if she’ll play next week before Olympic Club, but her exhaustive effort delivered a chance at her ultimate dream in two weeks.

“I really want to win U.S. Open, definitely getting into the field give yourself an opportunity to win the trophy,” she said.