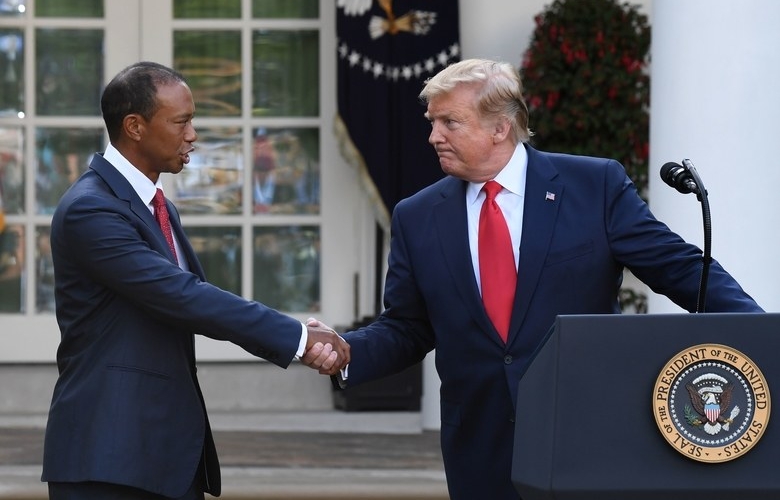 By Joel Beall
In an evening ceremony in the Rose Garden at the White House, President Trump bestowed the honour to Woods, who had his children, mother, girlfriend and caddie Joe LaCava in attendance.

“Today is my privilege to award our nation’s highest civilian honour to one of the greatest athletes in the history of sports, Tiger Woods,” President Trump said.

Woods is just the fourth golfer to be chosen, following Arnold Palmer (2004), Jack Nicklaus (2005) and Charles Sifford (2014). He is the first active athlete to receive the Medal of Freedom.

It’s an incredible privilege to be awarded the Presidential Medal of Freedom. Considering the recipients, history, and what this means to me and my family, it’s also very humbling. Thank you all for your support and I hope this inspires others to never give up on their dreams. pic.twitter.com/33CJIHwQvz

Trump went through a rundown of Woods’ career, from his amateur record to his breakthrough win at the 1997 Masters to his triumph at East Lake last fall.

An emotional Woods remarked the honour was an unbelievable experience, and thanked all those who have stood by him over the years.

“You’ve seen the good and bad, the highs and the lows, and I wouldn’t be in this position without your help,” Woods said. “I’ve battled, I’ve tried to hang in there, to comeback to play the great game of golf again. I’ve been lucky enough to do it again.”

Woods said the Masters was certainly one of the highlights of what he’s accomplished in his life on the golf course, and stopped to thank LaCava for “the good reads” to laughter.

The 43-year-old ended his speech by giving a nod to Sifford, who he called the “Grandpa I never had.”

“I became so close to him I named my son Charlie after him, so to be chosen as the next golfer after Charlie (to receive the honor) is truly remarkable.”

For those that missed the ceremony, rewatch the proceedings here: