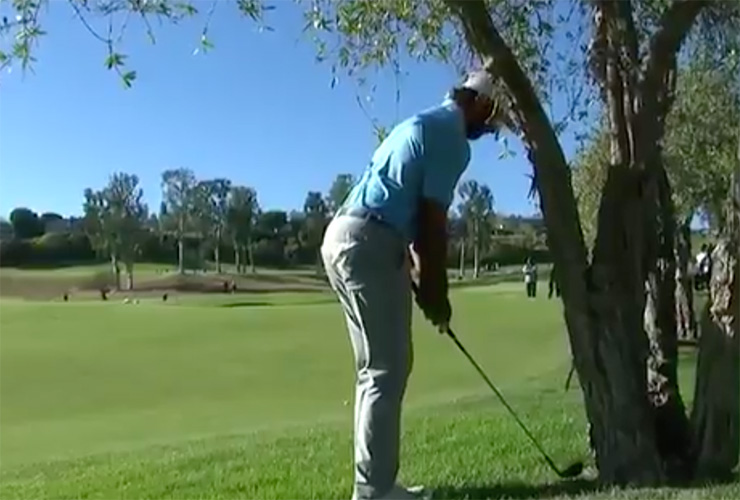 By Ryan Herrington
The expression on Max Homa’s face never seemed to change as he walked closer and closer to where his tee shot came to rest on the first playoff hole at the Genesis Invitational. Viewers at home knew his ball had stopped nearly flush against a eucalyptus tree left of the green on Riviera’s short par-4 10th hole, and they were no doubt waiting for some reaction of disgust from the 30-year-old local boy from nearby Valencia.

To Homa’s credit, it never came. Instead, he tried to figure out how to salvage something of a second shot and see if he could prolong the playoff with Tony Finau.

And salvage he did. Homa took out a wedge and determined he could hood the clubface and make a swing at the ball. If he played for a little hook, there was a shot he could catch a piece of the green some 30 feet away.

To the astonishment of those watching at home, he did just that:

Incredible chip from the tree from Homa. 👏

“I don’t know, sometimes when you get your creative brain working, you see it,” Homa said afterwards. “Joe [Greiner, his caddie] didn’t see it, I saw it. I felt pretty good about putting it on the front right of the green. Just sometimes you have to trust your instincts and that’s kind of the fun of golf. It’s not always fairways and greens, you’ve got to be an artist at times and fortunately, I did it when I needed to.”

Homa didn’t make the 10-footer for birdie, but the par was enough to move to the next extra hole, where a par wound up winning him the title.

What makes the chip shot on 10 more amazing is the fact that Homa had just missed a putt from 40 inches to win the tournament on the 18th hole at Riviera. He had the right to think he’d been robbed already of a title he’d desperately wanted to win. And then to see his tee shot catch such a bad break might have been too much to handle in the moment.

Yet Homa’s perspective in all likelihood proved the difference between winning and losing on Sunday.

“Yeah, it’s hard to be mad, I hit a great tee shot,” Homa said of his drive on the 10th hole. “I mean, it was a little left, but I did what I was trying to do, keep it left of the pin inside the trees. Obviously it was just inside the trees.”