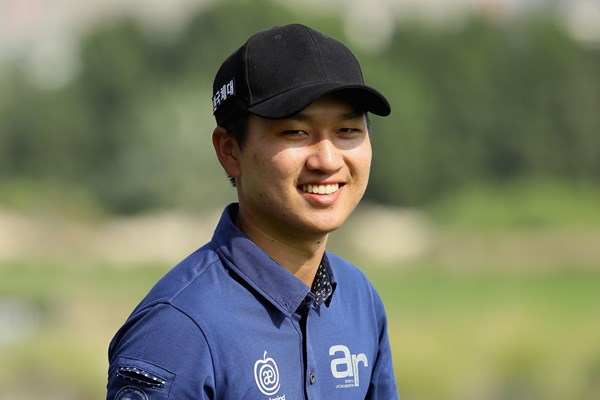 Sophomore slump? There’s no hint of one from Jeunghun Wang.

The 21-year-old South Korean, last season’s Sir Henry Cotton Rookie-of-the-Year, is on the cusp of a third European Tour title after emerging from a nine-player log jam atop the Commercial Bank Qatar Masters leaderboard Saturday.

A brilliant bogey-free 65 moved Wang to -15, three shots clear of South African Jaco Van Zyl and Spaniard Nacho Elvira heading into the final round of the Desert Swing event at Doha Golf Club.

Elvira is paired with another South African, Thomas Aiken (-11) in the penultimate group off the first at 11.56am Sunday but is set to resume his rivalry with Wang. The South Korean beat the Elvira in a play-off to win his maiden title at the Trophée Hassan II, with Elvira still looking for that first win.

Van Zyl is also looking for a first win on the European Tour and he joined Elvira in signing for a 68.

Wang followed up his win in Morocco with another victory at the AfrAsia Bank Mauritius Open just seven days later, a wind swept course not unlike Doha.

“I think the wind is similar but the course design is quite different. I love to play this course so I’m excited to play it tomorrow,” said Wang who was 11th in Abu Dhabi last week.

“I don’t want to think about winning, I just want to focus on my own game. I have a good chance to win.”

Wang hit his tee-shot to the 3rd to four feet and another smart approach to the 5th  got him into double figures. His eagle putt on the 9th left him a tap-in birdie and he chipped in on the 10th before holing a 20-footer on the 11th to take control.

A run of four pars followed but he produced an excellent chip after just failing to drive the par four 16th and then played a smart lay-up to take advantage of the last.

“My iron play was really good today and my putting was really good,” he said. “I shot seven under and I’m so happy that I didn’t make any bogeys today.”

Round three began with 44 players within four shots of the lead but by the end of the day that number was down to four.