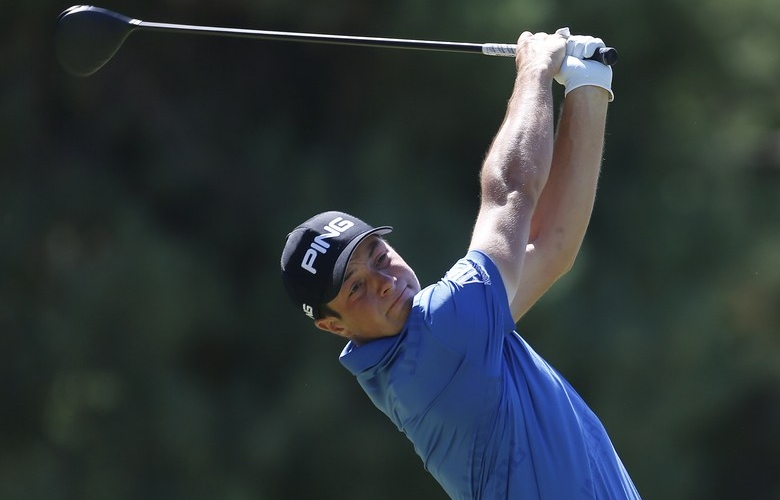 Jonathan Ferrey
BOISE, IDAHO – AUGUST 25: Viktor Hovland of Norway hits on the 5th hole during the final round of the Korn Ferry Tour Albertson’s Boise Open at Hillcrest Country Club on August 25, 2019 in Boise, Idaho. (Photo by Jonathan Ferrey/Getty Images)

By Dave Shedloski
WHITE SULPHUR SPRINGS, W. Va. – Viktor Hovland, the standout All-American from Oklahoma State, has proven to be a quick learner after turning professional in June, nearly earning his PGA Tour card in just five starts before getting it done in the Korn Ferry Finals.

Some things, however, are going to take more time to master.

Hovland said Wednesday at The Greenbrier Resort, where he is competing in the tour’s season opener, A Military Tribute at The Greenbrier, that veteran Charles Howell III has been offering him some guidance the past few months. Howell also is a former Oklahoma State All-American who won an NCAA Division I individual title in 2000.

“I’ve been playing a few practice rounds with Charles, and he’s been great with me,” said Hovland, 21, a native of Oslo, Norway, who captured the 2018 U.S. Amateur title. “Obviously, he’s been out here for 20 years now. You know, it’s been really cool to be around him. He’s a former Cowboy as well and really cares about you, so it’s been nice to talk to him a little bit.”

A three-time PGA Tour winner, Howell is considered one of the more approachable and polite players in the game. So it was a bit surprising when Hovland, an easy-going spirit himself, shared a piece of advice from Howell that really hit home.

“He told me be selfish out here,” Hovland said. “You know, you want to be a nice guy and talk to everyone, but your time is valuable. You got to put your head down and do your business. You know, that’s essentially why you’re here.”

Usually found with a perpetual smile on his face, the Norwegian was asked what a selfish version of himself might look like. “Good question. I’m still working on that,” he said, with a smile, of course.

Asked later if he even knew what it meant to be selfish, Hovland shrugged. “I’m not sure exactly how to go about it.”

Perhaps that’s the next lesson. But given Howell’s amenable disposition, he might not be the best teacher.