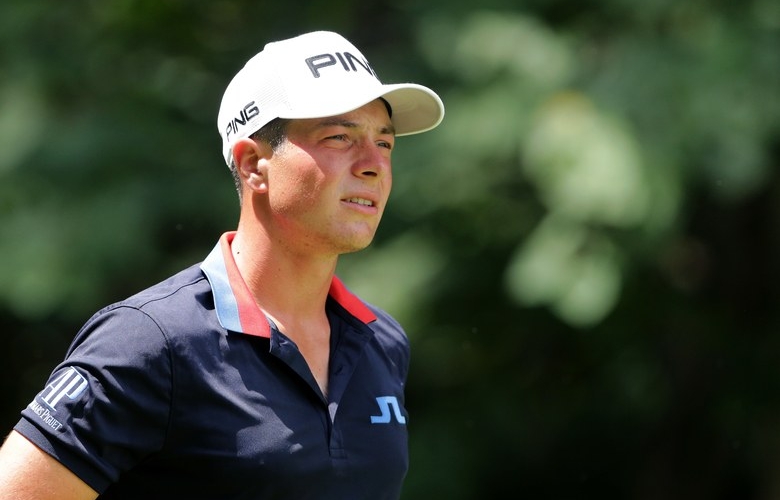 Hovland walks off the second tee during the final round of the Wyndham Championship at Sedgefield Country Club on August 04, 2019 in Greensboro, North Carolina. (Photo by Tyler Lecka/Getty Images)

By Dave Shedloski
Viktor Hovland didn’t need to earn his PGA Tour card to prove he belongs on the circuit. The quality of his play in his last four starts offered plenty of validation. Unfortunately, FedEx Cup points usurp style points, so Hovland won’t be joining fellow All-Americans and new professional sensations Matthew Wolff and Collin Morikawa on the tour after each won a tour event in July.

At least not yet he won’t be joining them.

A final-round 65 Sunday in the Wyndham Championship earned Hovland his best finish as a professional, outright fourth place, but he needed no worse than a two-way tie for second in the final regular-season tournament to earn enough points as a non-member to earn a PGA Tour card for the 2019-’20 season.

However, the 308 points he did collect in his five professional starts was the equivalent of 143rd in the points standings. That’s good enough to qualify for the three-event Korn Ferry Tour Finals that begin in two weeks at the Nationwide Children’s Hospital Championship in Columbus, Ohio.

Hovland, 21, can earn a PGA Tour card by placing among the top 25 in money earnings in those three tournaments. Considering that there could be up to 150 players in each field—possible, but not likely—the task is far from easy, though certainly attainable if his form holds. (It’s not likely because some players who fell short of the PGA Tour’s top 125, such as Brendan Steele and Austin Cook, remain exempt because of victories last season, making the Finals unnecessary.)

“I feel like I’ve just playing better and better every single week, and obviously this is my best finish throughout the five tournaments that I played [as a pro],” the native of Oslo, Norway, said. “I’ve just got to keep it going in the Korn Ferry Finals, and I should be OK.”

He’s probably not wrong in that prediction.

Hovland’s 19-under 261 total at Sedgefield Country Club, three strokes behind winner J.T. Poston, continued a scintillating scoring pattern that began with a final-round 64 at the Rocket Mortgage Classic, where he surged to a T-13 finish. Since then he has posted 12 straight rounds in the 60s. And he has shown to be especially clutch on Sunday, shooting 65 for T-13 at the 3M Open, 64 in placing T-16 at the John Deere Classic, and then, of course, converting eight birdies in his closing 65 at Sedgefield.

Too bad he didn’t get credit for his play in the Masters and U.S. Open. He was invited to the year’s first two majors via his victory in the 2018 U.S. Amateur at Pebble Beach Golf Links, and he was more than just respectable. Hovland shot three-under 285 at Augusta National to end up T-32, and then he returned to Pebble Beach for the U.S. Open and submitted a fine four-under 280 total fueled by a final-round four-under 67. He tied for 12th, one stroke out of the top-10 and an exemption into the 2020 championship.

“I already knew that it wasn’t going to count,” he said. “So, I mean, it is what it is. I just should have played a little bit better and it wouldn’t have been a problem. No, I don’t have any complaints.”

Hovland turned pro after the U.S. Open and made his debut at the Travelers Championship with Wolff. Two other college contemporaries, Morikawa and another All-American, Justin Suh, also received sponsor’s exemptions that week. Hovland’s road to a tour card was abbreviated—just five events—because he burned two of his allotted seven exemptions earlier in the season at the Mayakoba Classic and the Farmers Insurance Open. Interestingly, he missed the cut in both playing as an amateur.

That was during a period when he knew he wasn’t playing well, struggling particularly with his iron game. Nevertheless, he won three times in his final collegiate season. The struggle might have steeled him for his surge this summer.

“I remember after I came back from Christmas break, just hitting balls inside for four weeks, I was lost,” Hovland said. “I didn’t know where the ball was going really, and I really didn’t feel like I was hitting the ball that great in college my last semester. But I got a lot better at just playing the game and scoring with what I had. In that way, I’ve been really happy with just how I’ve been able to perform with the things that I’ve been playing with.”

He should be happy. He converted 24 birdies at Sedgefield, ranked second in the field. He was first in strokes gained/off the tee with a combined 5.477 average against the field. Tee to green he ranked third, and he was T-4 in greens in regulation for the week, finding 60 of 72.

A player who has shot 63-under par collectively in his last four starts definitely is tour material.

Still, more work must be done. That’s the hard math of it.

“I’ve played pretty solid, just very consistent,” he said. “Shot a couple of good rounds or really low rounds, but mostly it’s just been very consistent. I think that gives me a lot of confidence going into the playoffs [Korn Ferry Finals] because there are three tournaments, and I know that if I just play my game, I should make it through.”