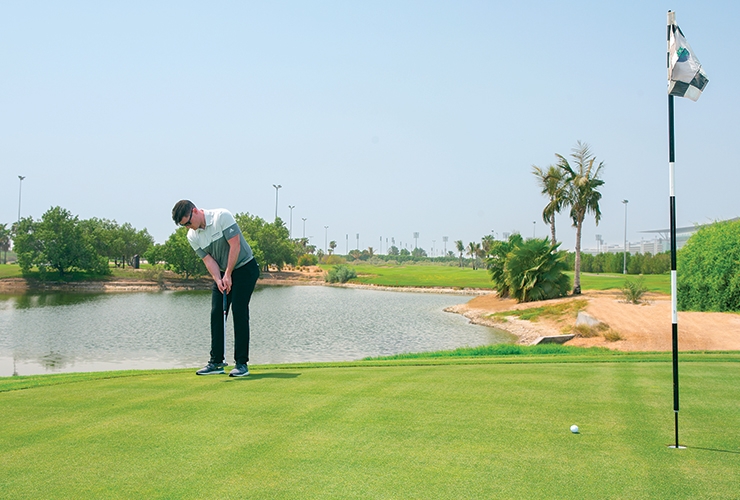 Tired of round-wrecking three-putts? Here’s a three-point plan to end the agony

By Ian Brennan
With a fully floodlit nine hole facility at our disposal, playing lessons are a popular option at The Track, Meydan Golf. Add some of the most highly regarded greens in the UAE to the equation and it also comes as no surprise that our team of Meydan Academy by Troon Professionals are often asked to help amateurs struggling to putt on the smooth surfaces.

It quickly becomes evident that most players don’t give putting the same care and attention as other aspects of the game. You use your putter more than any other club in the bag; it can be the difference between a career-low score and a disaster.

I always tell my students that in order to hole more putts, they need to create an environment that encourages a repeatable stroke. Let me guide you through my three point plan on the greens and put an end to three putts. – with Kent Gray

1. The Putting Setup
Although putting is perceived as straight forward by some beginners, it’s important we have the necessary fundamentals to ensure a consistent stroke and strike on the ball. The first thing I like to see is players adopt the correct grip.

– We want to have the putter handle running through the lifelines of both palms with the hands as level as possible. You may need to experiment with what feels comfortable when placing the fingers around the grip. This is partly the reasoning behind some of the larger grips we see on putters today. By placing the grip more in the palms you’ll limit wrist action in the stroke and encourage the arms and shoulders to work as one. This setup ensures your shoulders remain level and you don’t have any discrepancy in our setup.

– Once the setup has been achieved I like to see the ball position slightly left of centre. Too often I see amateurs with the ball position too close to the lead foot. This can create strike issues as the low point of the stroke occurs too far behind the ball resulting in catching it too much on the upstroke. For anyone that sees their ball bobble or skid when they strike it, this is the reason. Finally, the eyes should be roughly over the ball. This allows the arms to naturally hang from the shoulders.

2. The Putting Stroke
As mentioned, the grip will reduce wrist action in the stroke. A large part of the poor distance control I see in amateurs is their reliance on their hands to dominate. As a result, we tend to see a lot of last-minute flicking or hitting to try and generate speed. This results in inconsistent strikes and continual distance control issues.

– I know some of you will have heard terminology like “straight back and through” but the putting stroke should work on a slight arc to allow the putter to release correctly and ensure an efficient strike. The distance required can then be calibrated by simply adjusting the length of stroke. The pace at which the stroke is made should be constant and not accelerating. We want the length from backstroke to finish to generate the speed. The feeling should be of gathering the ball and not hitting it. You will feel and hear the difference on the face. Anything other than a solid sound and a soft feel could be another reason behind some of your putts skidding or bobbling which will inevitably lead to frustrating three putts – or worse!

3. Where To Focus?
We’ve worked hard on setup and stroke. Now what? Now it’s about intention. I always like to mentally categorise putts into three categories: cautious, hopeful and expectant. If I need to be cautious I’m picturing my putt finishing inside of a one to two foot circle which in turn sets up a comfortable two putt. If I’m hopeful, it means I’m faced with a lengthy putt but maybe one without any great undulations to manage. I can be somewhat aggressive. Then finally, if I’m expectant, I ensure I’m picturing myself making the putt, whether it aggressively hits the back of the hole or just falling in. Practice my three points and you’ll soon eliminate those momentum draining three putts.

To book a lesson with PGA Golf Professional Ian Brennan at the Meydan Academy By Troon, call 04 381 3733 or email [email protected]