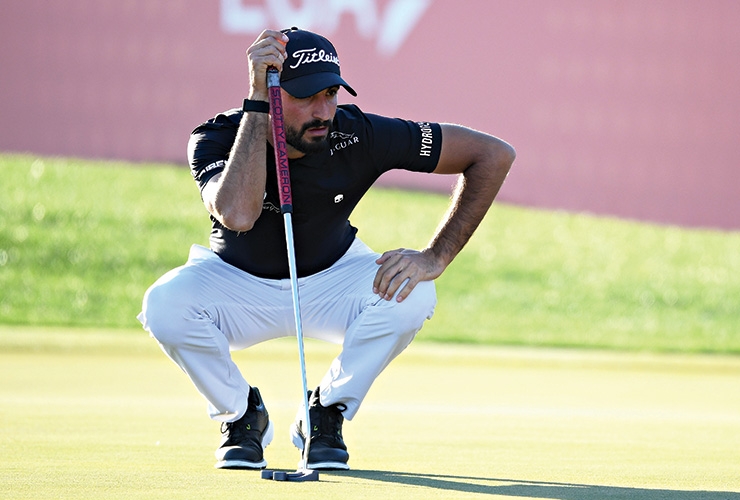 Ross Kinnaird/Getty Images
Laporta lines up a putt on the 18th green during the second round of the Abu Dhabi HSBC Championship at Abu Dhabi Golf Club on January 17, 2020,

By Kent Gray
Francesco Laporta is no stranger to going scary low, nor winning. The trick now for the surprise halfway leader at the Abu Dhabi HSBC Championship presented by EGA is figuring out how to merge both things on the biggest stage.

The unheralded Italian rattled off nine birdies, including five on the trot to close out a sensational, bogey-free 63 on Friday. It allowed him to wriggle clear atop a bunched leaderboard of otherwise household names at Abu Dhabi Golf Club.

Laporta will start the third round at -10,  halfway towards a maiden European Tour title but only a stroke clear of decorated European Tour winners Matthew Fitzpatrick and Rafa Cabrera Bello. With Sergio Garcia, Haotong Li and Renato Paratore at – 8, and Patrick Cantlay, former world No.1 Lee Westwood and 2010 Open champion Louis Oosthuizen among those three adrift, the 29-year-old won’t be getting ahead of himself.

Before he even has the chance to, the world No. 121 deserved to bask in the glory of the round of his life, a score few saw coming after he’d missed the cut in the Alfred Dunhill Championship and last week’s South African Open in his two previous starts since returning to the European Tour as Challenge Tour No.1.

“It was a great day,” Laporta said after inching to within a stroke of The National course record of 62, held jointly by Henrik Stenson (2006) and defending champion Shane Lowry (2019).

“My putting was solid, my driver, my irons. I gave myself a lot of opportunity for birdies, and when I had the opportunities, I took it. Every time I was putting for birdie, I made it.

“I didn’t start the season good. I missed the cut in South Africa two times, and this is the third event and I’m leading, so I just want to enjoy the weekend.”

As the reigning Challenge Tour No.1, it’s not as though Laporta hasn’t cracked the code to closing out tournaments. He won twice on the second tier tour last year, at the Hainan Open and the Challenge Tour Grand Final in Mallorca as recently as November to seal his promotion back to the big time.

But previous personal experience highlights how difficult it is to keep your card, much less win on the European Tour. Laporta’s best finish in the top flight was a T-22 at the Trophée Hassan II in 2016, his only full season on the European Tour where he eventually finished 189th in the Race to Dubai to tumble down to the Challenge Tour once more.

Perhaps coincidently, Laporta led after the second round of the Trophée Hassan II four years ago like he does here. He’ll also be hoping for a better finish than the last time he shot a 63, a then course record at the 2013 Zimbabwe Open, a Sunshine Tour event where he eventually finished tied second.

Friday’s 63 was two better than his previous European Tour best – at the King’s Cup in Thailand in 2016 – and the best score of the second round by a stroke after Swede Sebastian Soderberg soared 92 places up to a share of 18th after a 64.

If there was a score even more surprising than Laporta’s, it was Brooks Koepka’s 75. A wayward driver saw the world No.1 plummet 32 places down the leaderboard to a share of 35th at -3 – not out of it but with much work to do over the closing 36 holes.

At least Koepka is here for the weekend. Among those to miss the -1 cut were Bryson DeChambeau after a second-round 77 left the golf scientist puzzled at +5, and defending champion Shane Lowry who frustratingly missed out by a stroke.

The Irishman had a heated run-in with a greenside bunker on the 18th after catching a plugged lie and failing to advance his ball onto the green. The reigning Open champion took his frustration out on the trap with a couple more lusty blows. He immediately looked embarrassed by the crater he left and soon after crestfallen after his title defence ended prematurely as his par attempt from the apron cruelly lipped out.