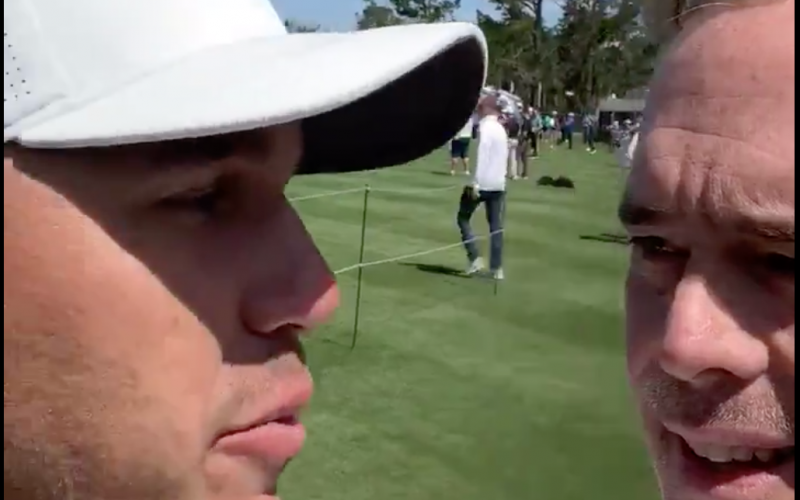 By Christopher Powers
Brooks Koepka has made a concerted effort to open up to the media this season, or, as he’s put it, to show more of his personality. In doing so he’s become a much more interesting character in golf than he was this time a year ago. He’s called out slow players, taken shots at Brandel Chamblee and even tried his hand at Instagram modelling, which fortunately for he and everyone else on Instagram, didn’t last long.

For Koepka’s latest act, he gave comedy a try, and did a damn good job alongside Joe Buck, who is at Pebble Beach this week to call the U.S. Open on FOX. For those who don’t remember, Buck and Koepka became forever connected when after Koepka won his very first major, the 2017 U.S. Open at Erin Hills, Buck misidentified Koepka’s girlfriend Jena Sims. As Sims and Koepka shared a victory kiss, Buck referred to her as Becky Edwards, a professional soccer player whom Koepka used to date. Talk about a major snafu.

Sims, Buck and Koepka have all since made up, though, according to this video from Joe Buck’s Twitter account, Brooks still hasn’t forgotten. Have a watch:

Ok, so this is clearly the most-staged thing ever, but that doesn’t make it any less hilarious. Really solid acting skills from Koepka, whose scripted “you’re doing a great job with Romo” shot was money. Same goes for Buck, though he’s kind of gotten used to being everyone’s punching bag, so much so that he’s embraced it. I think it has made him underrated in a way, though you won’t hear that from anyone on social media this week. Expect a heavy dose of “JOE BUCK SUCKS” and “WHY IS JOE BUCK DOING GOLF!?!??” tweets from the various group thinkers on the internet this week. I’ll be over here enjoying Joe Buck’s dulcet tones and his self-aware humour, at least until he’s calling Giants-Cowboys with Troy Aikman in the fall and I realise I hate him again.