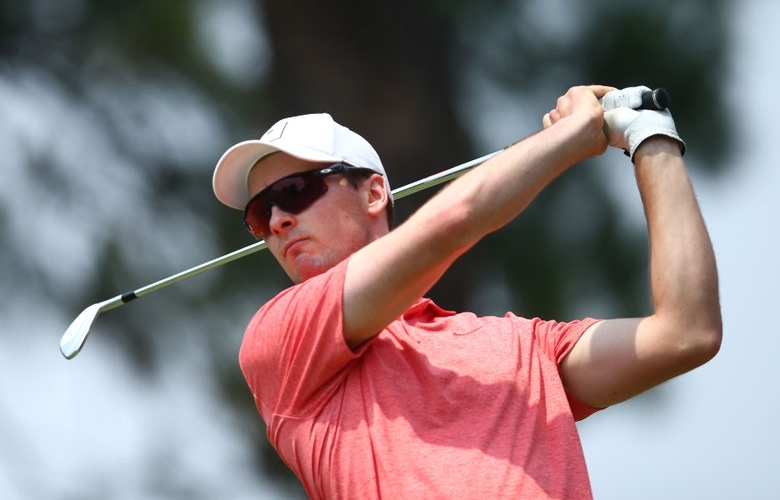 Jason McCawley
Lukas Michel hits a tee shot on the third hole during the third round of the 2019 Australian Open.

By John Huggan
For Australia’s Lukas Michel, it was going to be a month-long trip of a lifetime. When the 26-year-old U.S. Mid-Amateur champion left his Melbourne home March 11 for the United States he was looking forward to playing in a pair of amateur events along with taking his hard-earned place in the Masters.

Not any more, of course. Ten minutes before he boarded his early morning flight from Los Angeles to Atlanta on March 13, Michel heard the news that the Augusta National officials had postponed the year’s first major.

“Had I known what was going to happen before I left Australia, I probably would never have gotten on the plane in Melbourne,” Michel said. “The events I was planning to compete in before the Masters have been cancelled as well. It’s all been pretty disappointing.”

Still, all was not completely lost. Duplicating his first visit last November, Michel was still able to enjoy Augusta National, as well as lodging in the Crow’s Nest high in the clubhouse. After arriving on Friday, he played the course twice over the weekend. It was his intention to play again on Monday in the company of ANGC member Jeff Knox, the many-time Masters marker when an odd number of players make the halfway cut, but that was cancelled.

Which was no bad thing, as far as Michel was concerned. Having already used three of the five days of play he is allowed in preparation for the biggest week of his golfing life, he was happy enough to save the remaining two for a later date.

“The head pro called me to say they were starting to close down operations,” Michel said. “I think the only people there now are a few of the members who are staying on-site. Other than that, there is pretty much no one around. The club was actually really busy over the weekend though. I had dinner there on Friday evening and the dining room was full. And the on-site accommodation was close to full capacity. As many as 20 groups played on Saturday.

The only other Masters competitor Michel encountered was John Augenstein, runner-up in last year’s U.S. Amateur. Tiger Woods and his son had appeared on the starting sheet for Monday, according to Michel, but along with Jason Day and Marc Leishman, the five-time Masters champion understandably pulled out.

Anyway, what of the course?

“The course was very different from my last visit in November,” Michel said. “The ryegrass overseed was in pretty thick. The fairways were much more densely covered with dark green grass. The greens were still a little slow and soft. But they have had a lot of rain recently. All in all though, it was in good shape. They were clearly getting everything ready for the tournament.”

When the Masters will actually take place remains a matter of some conjecture, but October seems to be the best bet, a favouritism Michel is happy to confirm.

“The speculation about October is pretty much bang on,” he said. “While I was at Augusta National, I heard that the club is talking to local schools to see if they can move Fall Break by a week. Or maybe extend it by that much. They use a lot of volunteer kids at the tournament. So October sounds like it is the first option.”

Talking of which, Michel has no intention of giving up his place in the event. While he intends to turn pro at some point, he will not do so until after the Masters, whenever that may be.

“I’m going to stay amateur and wait it all out,” he said. “If we do play in October it won’t make a massive difference to me. Maybe the only thing I will miss is the Japan Tour Qualifying School. But this gives me more time to work on my game. And having a few more rounds at Augusta is a nice bonus.”

More immediately, however, Michel has something less exciting to look forward to. When he arrives back in Melbourne this weekend, he will be subject to a government-mandated 14-days of self-isolation because of the coronavirus pandemic.

Hey, no one ever said golf was an easy game.