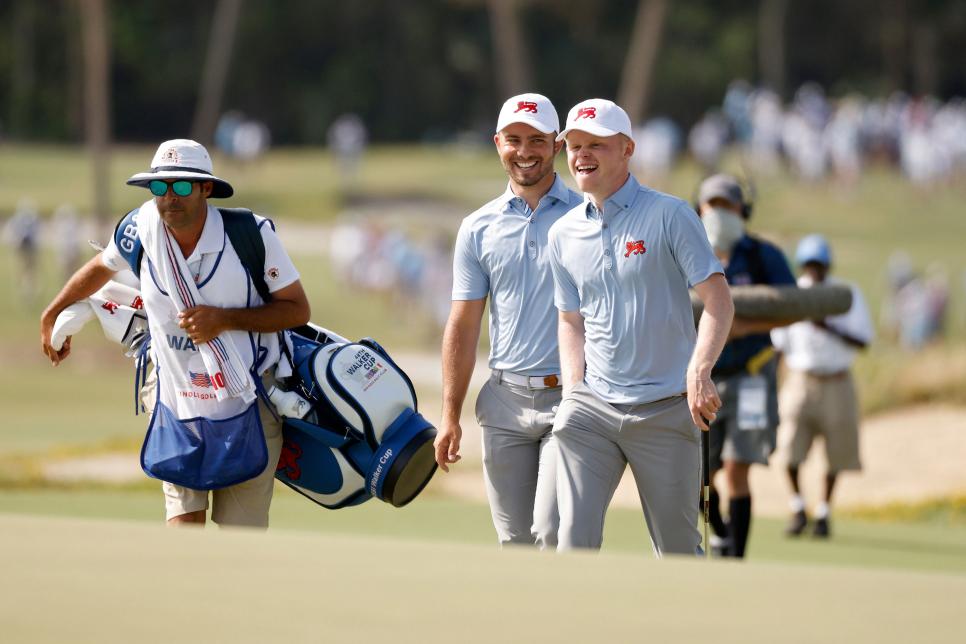 Cliff Hawkins
GB&I’s Jake Bolton and Angus Flanagan earned one of two point for the road underdogs during the opening foursomes sessions at the Walker Cup.

By Ryan Herrington
JUNO BEACH, Fla. — The score reads 2-2 after the morning foursomes of the 48th Walker Cup. But you’ll forgive those watching at Seminole Golf Club if it felt like Great Britain & Ireland walked off with a “victory” in the opening session.

At one point on Saturday morning, the GB&I team was losing in three of the four matches, and the feared American runaway looked as if it had already begun.

But a rally by the Irish duo of Mark Power and John Murphy and a hold-on-for-dear-life win by Angus Flanagan and Jake Bolton in the anchor match secured two crucial points for the underdog road team.

Power and Murphy were facing Americans Quade Cummins and Austin Eckroat, and found themselves 3 down through five and again through 12. But the Irish duo won the 13th, 14th and 15th holes to tie the match, and then took their first lead by winning the treacherous par-3 17th with a par.

“I think I said to Mark both times, I just said, ‘we’re playing great, we just have to stick to what we’re doing,’ ” Murphy said. “We got a couple bad breaks early on, but let’s not try and force anything.”

Meanwhile, the final GB&I duo of Flanagan and Bolton went from 1 down against Stewart Hagestad and William Mouw on the 10th hole to 2 up on the 14th, only to lose the 15th and 16th holes. They then seemingly put themselves in a horrible spot on the par-3 17th when Bolton’s tee shot found the sandy brush short of the green. But Flanagan hacked out his second shot to 25 feet and Bolton rolled in the par putt, while the Americans bogeyed. (Insert your “vagaries of match play” line here.)

Left-to-right swing and IN!

There was more angst on the 18th when Flanagan’s drive leaked right into the driving range. But Bolton hit an impressive approach to 10 feet, which set up a tie on the last hole and a 1-up victory.

“Obviously, our point is hugely important now,” Bolton said. “I think the guys have a lot of self-belief, and I don’t see why that should change. We’re all good players, and we all deserve to be here, so we’re going to give it our best shot.”

Mind you, the Americans showed some moxie of their own. Cole Hammer and Davis Thompson, playing in the lead match, appeared to have taken control against Alex Fitzpatrick and Barclay Brown, going 3 up through 13 holes, only to find themselves tied after the 16th. But the Americans won the 17th with a par and then Hammer rolled in a 35-foot birdie putt on the 18th hole to close out the match, 1 up.

Game, set, match!@cole_hammer6765 puts the first point on the board for USA 🇺🇸 in the #WalkerCup. pic.twitter.com/d6F8teAx2g

The other American point came from the pair of Ricky Castillo and Mac Meissner, winning 2 up over Jack Dyer and Matty Lamb.

Both GB&I captain Stuart Wilson and U.S. captain Nathaniel Crosby were on the first tee as the morning session commenced, which sounds obvious but wasn’t a given since both were sidelined by the stomach bug that impacted 14 players total from both teams this week. Two alternates were pressed into duty on Saturday morning, Meissner for the Americans and Bolton for GB&I, and interestingly both came away with points.

The good news for the Americans is that their top-ranked player, John Pak, is back in the lineup for Saturday afternoon’s single session. So too is Pierceson Coody. U.S. Amateur champion Tyler Strafaci, however, was forced to sit out again after originally being scheduled to play in the afternoon. On the driving range, approximately 25 minutes before his match with Ben Jones, Strafaci was administered an IV to help with hydration. Mouw stepped up to the range and started hitting balls, and shortly after was officially named Strafaci’s replacement.

GB&I has Ben Schmidt and Ben Jones playing in the afternoon session after sitting out the morning, but British Amateur champion Joe Long, who was slotted into the No. 5 singles match, was a late scratch as well.

“It’s been bizarre for a lot of reasons,” Crosby said. “Fortunately both the R&A and the USGA were flexible with their terms.” 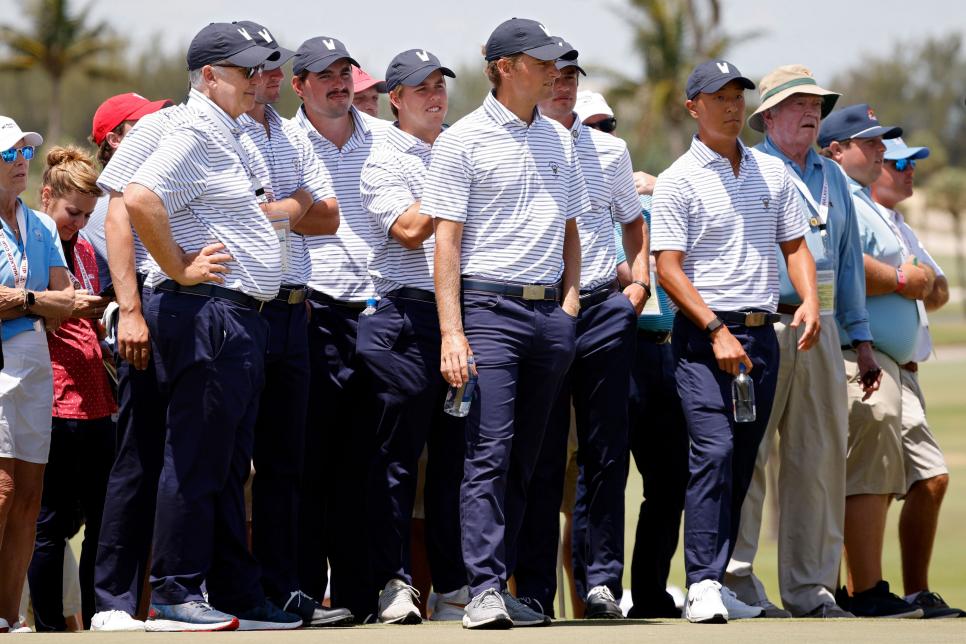 Of course, American fans can take heart in the fact that they aren’t actually losing (it’s the third straight Walker Cup that the Day 1 foursomes ended 2-2). Moreover, recent Walker Cup history suggests they’re in very good position to still win. Since 2003, the U.S. team has won the opening foursome session only twice but has won the overall match six of eight times in that time span.