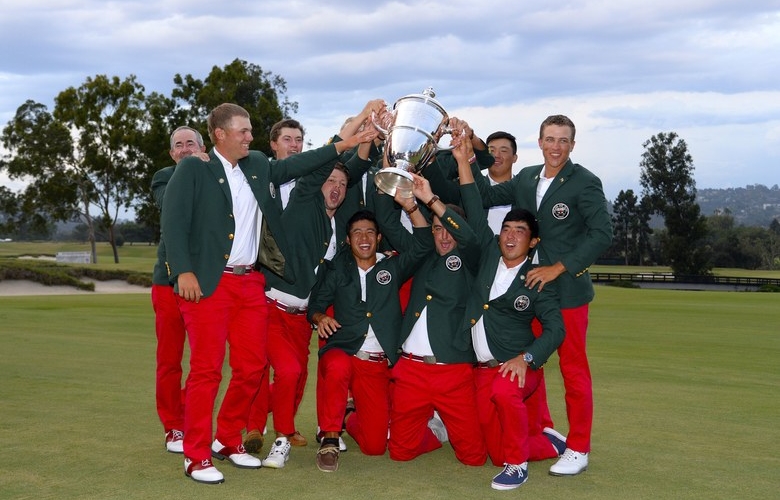 By Ryan Herrington
PINEHURST, N.C. — With his victory at the U.S. Amateur on Sunday at Pinehurst Resort, Georgia Tech senior Andy Ogletree earned an automatic spot on the U.S. Walker Cup team that will head to Royal Liverpool in three weeks to take on its Great Britain & Ireland rival in the biennial matches and try to win for the first time overseas since 2007.

The only problem? Ogletree doesn’t have a passport.

“Wow, I hadn’t actually thought about that,” Ogletree said on Sunday night, still in a bit of a daze after his 2-and-1 win over Vanderbilt’s John Augenstein. In part, perhaps because making the Walker Cup team wasn’t really something he was mindful of at the start of what turned out to be a fateful week for the 21-year-old from West Point, Miss.

Suffice it to say, the USGA staff will get on the case to make sure Ogletree is free to hop the Atlantic and join his American teammates, six more of whom were named on Sunday evening after the conclusion of the U.S. Amateur to round out captain Nathaniel Crosby’s 10-player squad.


Among them is Augenstein, who despite losing to Ogletree in the finals on Sunday still sports a 17-4-1 record in matchplay competition since spring 2017. Also selected to the squad were one current college golfer—John Pak (Florida State)—and four recent grads in Steven Fisk (Georgia Southern), Alex Smalley (Duke), Isaiah Salinda (Stanford) and Brandon Wu (Stanford).

They join Texas sophomore Cole Hammer, high school senior Akshay Bhatia and mid-amateur standout Stewart Hagestad, who had all been named to the team last month thanks to their top spots on the World Amateur Golf Ranking.

“The USGA has assembled an extremely talented squad to represent our country in the 47th Walker Cup Match,” said Stuart Francis, USGA Championship Committee chairman. “We are looking forward to watching this group bond in the spirit of teamwork, commitment and camaraderie when they compete to defend the Walker Cup.”

The USGA named two alternates for the team: Chandler Phillips and Ricky Castillo.

Led by captain Nathaniel Crosby, the U.S. will try to defend the cup they won by a 19-7 march over GB&I in 2017 at Los Angeles Country Club.