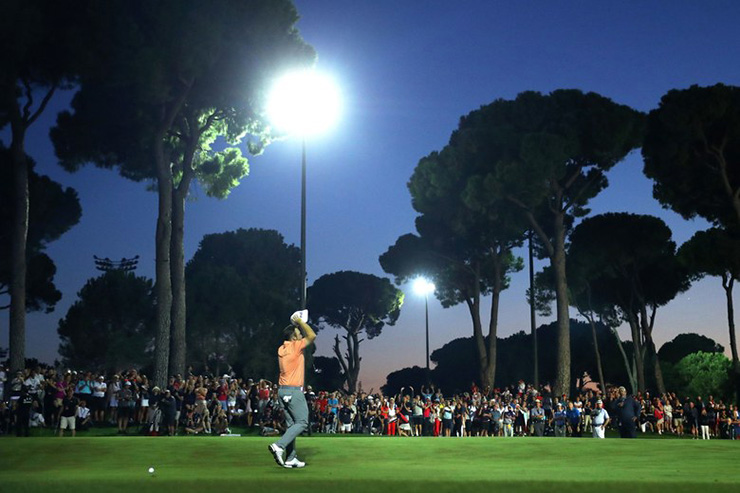 Tyrrell Hatton hangs on to win a six-man playoff under the lights at the 2019 Turkish Airlines Open. (Warren Little/Getty Images)

By John Huggan
For the first time on the European Tour since the 2003 Alfred Dunhill Championship, there were six starters in a sudden-death—and ultimately floodlit—playoff for the Turkish Airlines Open title and the $2 million first-place check.

Erik Van Rooyen, Kurt Kitayama, Tyrrell Hatton, Matthias Schwab, Victor Perez and Benjamin Hebert all shot 20-under-par 268s for 72 holes over the largely defenceless (little or no wind, soft greens) 7,133-yard Montgomerie Maxx Royal course. Thankfully, given the looming sunset, it took only one trip up the 558-yard par-5 18th to cut the playoff field in half. Van Rooyen, Perez and Hebert all bowed out after failing to make the required birdies.

After playing the 18th a second time in extra holes, there still remained three. Hatton failed to follow up his unlikely chip-in on the first playoff hole and settled for par. Schwab’s clumsy pitch from behind the putting surface meant he did likewise. And Kitayama missed from six feet for what would have been his third victory in his first season on the European Tour, an unprecedented feat.

A third time round, Hatton and Schwab turned wayward drives (all three missed the increasingly elusive fairway) into birdies. Exit Kitayama, who remains engaged in a spirited and high-quality struggle with Scotland’s Robert MacIntyre for rookie-of-the-year honours.

Perhaps not surprisingly given the stress each man must have been feeling amid the unfamiliar lighting, the eventual conclusion on the fourth playoff hole was laced with errors. While the ever-expressive Hatton was still remonstrating with himself after missing from roughly eight feet for a winning birdie, Schwab stepped up and missed from half that range. It was over par for Hatton versus bogey from Schwab. 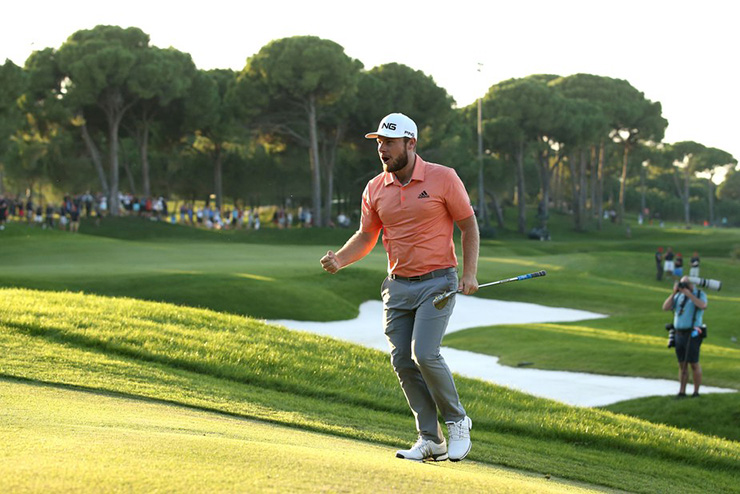 Hatton celebrates after chipping in on the 18th hole during the first sudden-death playoff hole. (Jan Kruger)

“This surreal, I actually can’t believe I’ve won,” said Hatton, who shot a closing 67 to get in the playoff. “It’s been quite a difficult year off the course, but the last month I feel like I’ve really found my game again. I’ve been saying to a few people on my team that if I was lucky enough to win again, I would definitely savour the moment. Golf is great when it is going well, but when it isn’t, it kind of hits home. So I’m thrilled. I’m just so happy.”

Indeed, for the champion, who had fallen 25 places to 48th in the World Rankings since the start of 2019, there was irony in this, his fourth career European Tour victory. At the end of this month, the Englishman will undergo surgery on the wrist injury that has bothered him since the 2017 Masters.

“I know it’s not normal to feel excited about an operation, but it’s such a relief to get to the bottom of what has been a very worrying problem,” Hatton said. “I’ve had three steroid injections that basically lasted six months each time, but that couldn’t go on and so since July I’ve been seeing the tour doctors just to see what I can take to get me through each round.”

In truth, Schwab surely left the premises with the most regrets. After sharing the lead on Day 1, the 25-year-old Salzburg-native held it outright until the 72nd hole, when he missed a 20-foot birdie try that could have avoided the playoff entirely, setting for a final-round 70 after taking a three-shot lead into the final 18. Schwab also was the only man in the playoff who did not make at least a birdie on that closing par 5.

“I’m not feeling too great, obviously,” was his immediate reaction to what was clearly a painful defeat. “But it was a close call. I had some good looks and good chances coming down the stretch in regular play. I just didn’t take advantage of them. A second-place finish is not too bad though. Even if, at the moment, it doesn’t feel too good.” 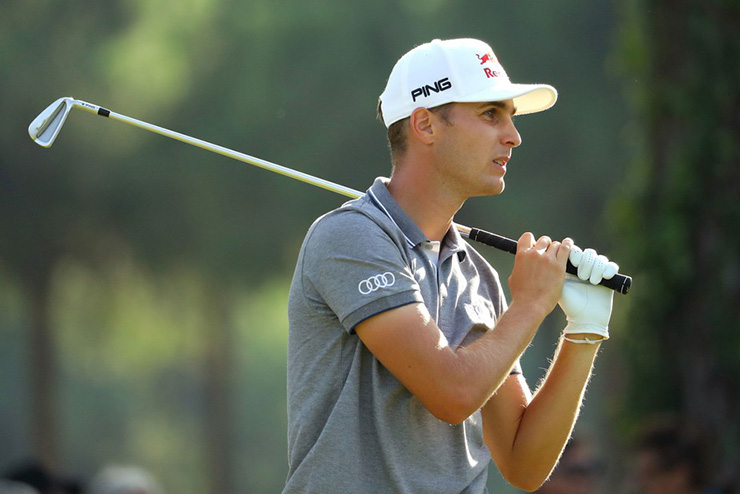 Schwab held the lead throughout the final round as he was trying to win his first European Tour title. (Warren Little/Getty Images)

Schwab should not feel too bad. Like his compatriot Bernd Wiesberger, he is a man on the rise, a fact that will not have escaped the notice of European Ryder Cup captain Padraig Harrington. This was just the latest in a string of high-finishes from the 2017 Vanderbilt graduate. Not only was this second-place tie Schwab’s sixth top-10 finish in his last nine events, he has 10 in all, more than anyone else on this season’s European Tour. En route, he has broken par in 31 of his last 35 competitive rounds. Given that sort of sustained form, a maiden win cannot be far off.