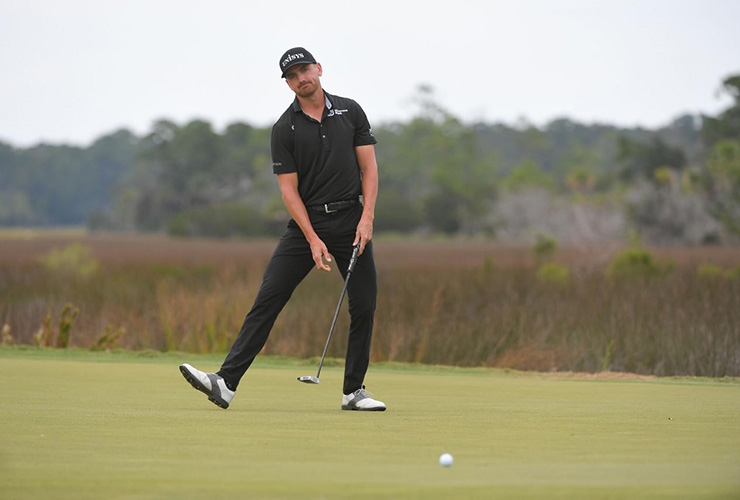 Kevin Dougherty reacts to missing his putt on the 18th green during the playoff at the Korn Ferry Tour’s Savannah Golf Championship. Ben Jared

By Ryan Herrington
Nothing ever goes entirely as scheduled the week of your wedding. But for Kevin Dougherty, set to tie the knot this coming Saturday in California, things got off to a (happily) unexpected start.

The 29-year-old Korn Ferry Tour pro, who hadn’t seen his fiancé in two months while competing on tour, was supposed to be on a 5:30 p.m. flight from Georgia back home on Sunday after wrapping up play at the Savannah Championship. Except that he had to delay his plans when he found himself leading the tournament late into Sunday.

Dougherty started the final round one stroke back of 54-hole leader Evan Harmeling, but was five under through the first 15 holes at The Landings Club’s Deer Creek Course to jump to the top of the leader board. Dougherty, ranked 134th on the KFT points standings coming into the event, had a two-stroke lead with three holes left but bogeyed the 17th and saw Harmeling birdie 18 to force a playoff. Harmeling then made a 10-foot birdie on the first extra hole to take the title.

“It’ll be nice to get home and see her. I was hoping to get home Sunday but considering the circumstances, I don’t mind,” said Dougherty, who rescheduled his flight to Monday morning.

Still searching for his first KFT win, Dougherty carded his third runner-up finish in his three seasons on the developmental tour. And it easily topped his previous best performance of the 2020 season, a T-22 in Portland, while jumping him to 63rd on the points list.

The tour has one more event scheduled for 2020, this week’s Orange County National Championship in Florida.