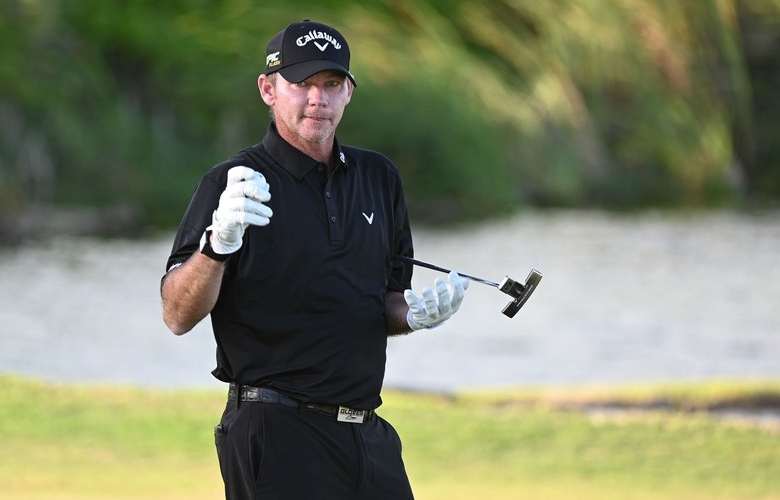 Ben Jared
Tommy Gainey raises his ball to fans on the 18th green during the final round of the Korn Ferry Tour 2020 Bahamas Great Exuma Classic.

By Brian Wacker
Former PGA Tour winner Tommy Gainey, who was arrested in Polk County, Fla., in December for soliciting a prostitute and facing a first-degree misdemeanour charge, will avoid jail after agreeing to serve 11 months probation, according to court records.

Gainey, who was one of 124 people nabbed in a large-scale six-day undercover sting dubbed “Operation Santa’s Naughty List,” was also ordered take a human trafficking class, serve up to 100 hours of community service and will pay fines and fees totalling $6,218.60.

In exchange, prosecutors agreed to drop the misdemeanour solicitation charge. Gainey also could see his probation reduced if he meets the requirements of the deal quickly.

Neither Gainey, 44, nor his agent with Empire Sports Management responded when contacted by GolfDigest.com. The PGA Tour, through a spokesperson, said that it had no comment.

Last month, Gainey, despite the case hanging over him, shot a final-round 69 to win the Korn Ferry Tour’s 2020 season-opener, the Bahamas Great Exuma Classic at Sandals Emerald Bay. The victory was his first on any tour since 2012 and an emotional one.

“This means everything,” said the married father of two. “My wife, I love her to death. Her and the boys mean everything.”

In a post-round interview, Gainey, who is affectionately known as “Two Gloves” for wearing a glove on each hand, only alluded to “getting his life back on track.”

While a victory on the developmental circuit doesn’t guarantee promotion to the PGA Tour, Gainey, who has one career victory on the PGA Tour (2012 McGladrey Classic) and $5.6 million in earnings in 200 starts, is in good position to try to regain his card for the 2020-’21 season. Through four events, he is fourth in the Korn Ferry Tour’s season-long points race, with the top 25 at the end of the regular season automatically advancing to the PGA Tour.