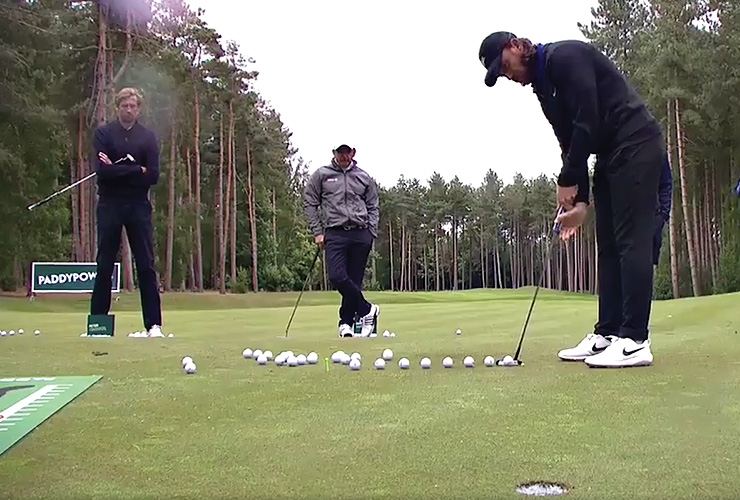 By Christopher Powers
After back-to-back weeks of televised charity golf matches, golf fans have to wait a full two weeks to get their fix. The PGA Tour is set to return next week at Colonial, which will kick off a 26-week stretch of live golf being back on your TV screens. Inject it right in our veins, doctor.

However, this weekend isn’t completely void of golf competition. Over in England, a few well-known European Tour pros and celebrity golfers are competing in the inaugural Paddy Power Golf Shootout. Tommy Fleetwood, Andrew “Beef” Johnston, Thomas Bjorn and Paul McGinley are all in the mix, along with soccer star Harry Kane, television personality Piers Morgan and LET pro Carly Booth, among others.

The group is competing in a number of challenges, one of which was an attempt to set a new Guinness World Records title by making the most putts from a “socially-distant” length of 6.5 feet in 60 seconds or less. Yes, apparently that is a World Record.

The number to beat was 14, and Fleetwood made his 15th JUST in time:

Impressive stuff, especially considering he did it with that claw grip. It can’t be easy to quickly roll in putts when you hold the putter like that, but Tommy lad knows what he’s doing.

Fleetwood’s record did not last long. McGinley, the 2014 Ryder Cup captain, smashed it with relative ease:

What an effort from @mcginleygolf! 🔥

He's now a @GWR holder after this superb performance…👏#PPGolf pic.twitter.com/35c6buSFVE

Unbelievable. The Irishman made eight straight to start, then added 12 more before time ran out. And, unlike Fleetwood, he took his time, setting up for each putt. Fleetwood seemed to have a staggered stance throughout as he tried to speed-putt his way through it. Patience prevailed for the savvy veteran McGinley, and he now holds a world record you never knew existed that will be extremely tough to beat. Cue everyone who watched this heading straight to the nearest putting green to give this a go. Good luck, folks, and make sure to record your futile attempts.