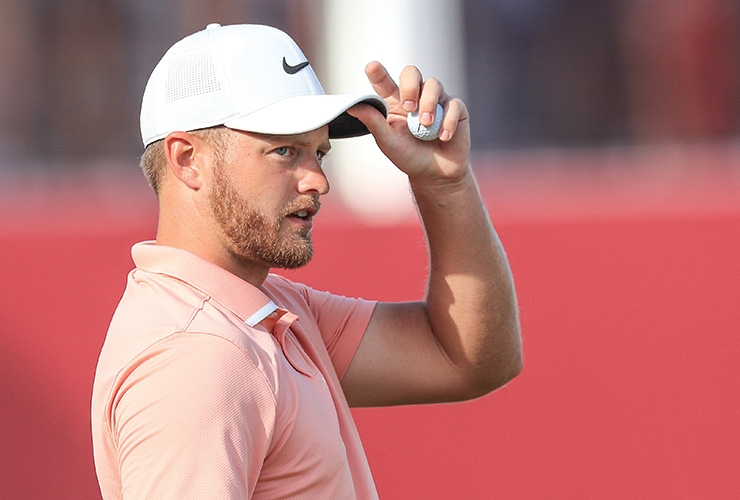 David Cannon/Getty Images
Lewis acknowledges the gallery on the 18th hole during the third round of the Omega Dubai Desert Classic on January 25, 2020.

By Kent Gray
With his amateur pedigree, two European Tour titles and that sweet swing of his, few are surprised that Tom Lewis has crept up on everyone to give himself a shot at OMEGA Dubai Desert Classic glory on Sunday. Perhaps other than Lewis himself, that is.

The 29-year-old Englishman has fashioned a workman-like record at Emirates Golf Club, making the cut in all six previous appearances without ever being able to seriously contend, a T-48 finish last year his best at the $3.25 million event.

After rounds of 75-71 to miss last weekend in Abu Dhabi by three strokes and an opening 73 here on Thursday, there was little recent evidence to work with either. But Lewis’ week has got progressively better, a 69 on Friday and a bogey-free, equal-best of Saturday 65 moving the world No.62 within two strokes of pacesetter Ashun Wu.

It’s little wonder the Welwyn Garden City G.C.-attached pro was “really happy” with his seven birdie performance on ‘moving day’, a score three better than his previous lowest on the Majlis, 68s in the first rounds of the 2015 and 2019 editions.

“I haven’t really shot many low scores around here, so to shoot that score is great,” said Lewis who won the Boys’ Amateur Championship at Royal St George’s in 2009.

Lewis would become the first Englishman since Danny Willett in 2016 to win the Dallah trophy if he can keep it going on Sunday, not that he was getting ahead of himself on Saturday evening.

“Yeah, it’s got some very special winners. It’s a long way away though. I think Ashun is ripping it up there at the moment. So keep doing what I’m doing, if the putts go in it’s meant to be and if not, if I keep playing like this, good things will happen.”

Lewis was thrilled to keep his card blemish-free with a neat up and down on the 16th and was unlucky not to eagle the 18th after easily clearing the 213-yard carry over the water on the par-4 with a 4-iron.

He couldn’t put a finger on the likely winning score Sunday but does know more precise shot-making and plenty of holed putts will be needed, no cinch if the windy forecast is proven correct.

“Anything could happen. There’s always someone that shoots a low score in the last round and around here you can easily get out of place and find yourself one-over, two-over like I did the first round. But if I can keep doing what I’ve done the last couple of days and give myself opportunities, try to limit mistakes…if it’s meant to be, it’s meant to be.”

Great golf and that droll sense of humour. What more could you ask for from Eddie Pepperell?

Get involved by sharing pictures of your "home" club (or last club outside the UAE) and let's see how many countries the Golf Digest Middle East community can tick off.