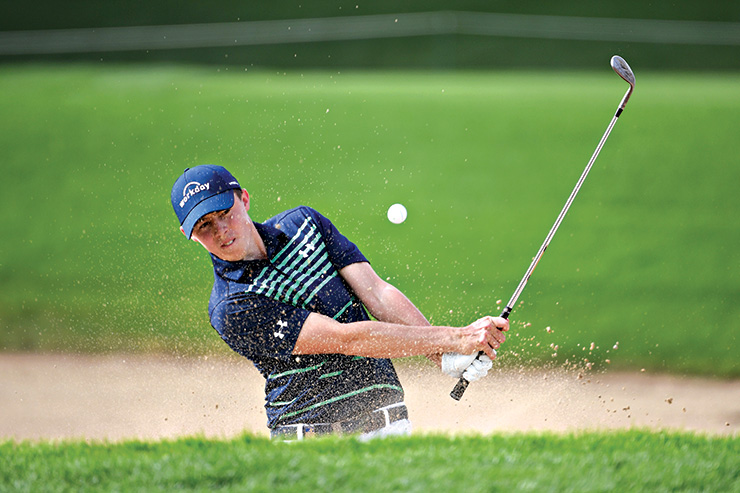 By Kent Gray
Matthew Fitzpatrick spent the off-season working with a new fitness coach to help him eek a few precious extra yards out of his driver. He also employed a new but thoroughly broken-in bagman in Billy Foster to help him carry the longer big stick in between shots. Sprinkle in a hearty dollop of disappointment from a 2018 season that would be useful by most other standards, and you apparently have the perfect recipe to lead the 30th Omega Dubai Desert Classic.

Fitzpatrick emerged atop a clustered Majlis leaderboard on an opening day of the $3.25 million European Tour event which saw 74 of the 132 players roar into red figures. The 24-year-old Englishman signed for a seven under 65 but left it late to burst through the congested pack, birdieing five of his last six holes.

But Thursday at Emirates Golf Club ultimately belonged to Fitzpatrick. A chip and tap-in birdie from beyond the green of the Majlis’ par-5 18th catapulted the five-time European Tour winner into the lead and also produced an explanation that unlocked the details of a thus far fruitful off-season.

“Yeah, it was obviously a great finish to the round. A couple things that sort of I’ve been doing in the off-season sort of looked to have paid off a little bit,” the 2016 Ryder Cupper said.

“I just added a bit of extra length to my driver, so it’s given me a few yards to help get on in two on the last [hole] because I’ve never been able to do that here. And then, yeah, just wedging it a lot better has given me a few more chances coming in.”

The addition of Foster, who was let go by Westwood after helping him ascend to No.1 in the world with 13 wins and eight top-three finishes in the majors during their 10-year partnership, has been a boon for Fitzpatrick too.

“His sense of humour could outweigh the experience, I think,” Fitzpatrick joked when asked if he was enjoying Foster’s wisdom. “But no, he’s brilliant. He’s been through a lot, and having him on the bag, I’m a very lucky man. I know he had quite a few offers. Yeah, it’s nice to have him there alongside me.”

Fitzpatrick has made a fast-start to this wrap-around 2018-19 season after finishing runner-up to compatriot Aaron Rai in the Hong Kong Open – all of a week after the the 2018 season climaxed at Jumeirah Golf Estates.

The successful defence of his Omega European Masters title in September helped the Sheffield pro finish 24th in the Race to Dubai standings but four top-10s and €1.53 million in prizemoney couldn’t camouflage deficiencies in his game.

“I’m not going to lie, I was really disappointed with my season last year, second in Hong Kong kind of saved it a little bit at the end of the year there, but I knew a lot of things needed to change.

“I needed to work on different parts of my game, different shots, and really did feel like I put in a lot of work, to be honest. And so far I’ve played five rounds this year and have played pretty well for all of them. Hopefully it continues. It’s just nice to see it pay off.”

The trick now for Fitzpatrick is to kick on this week at a venue where he’s finished fifth (2017) but also missed as many cuts as he’s made in his four previous appearances.

“This golf course has been strange to me. I think this is my fifth time. I’ve had one decent finish, a couple missed cuts. But I do like the golf course. You know, it’s tough. You’ve got to hit fairways, you’ve got to hit greens, and I think it does suit my game if I’m playing well. So I think it’s nice to be able to get off to a good start, and hopefully three more rounds like that would be nice.”

DeChambeau on influencing the next gen like Tiger: “This is actually not a joke. This is legitimate science.”