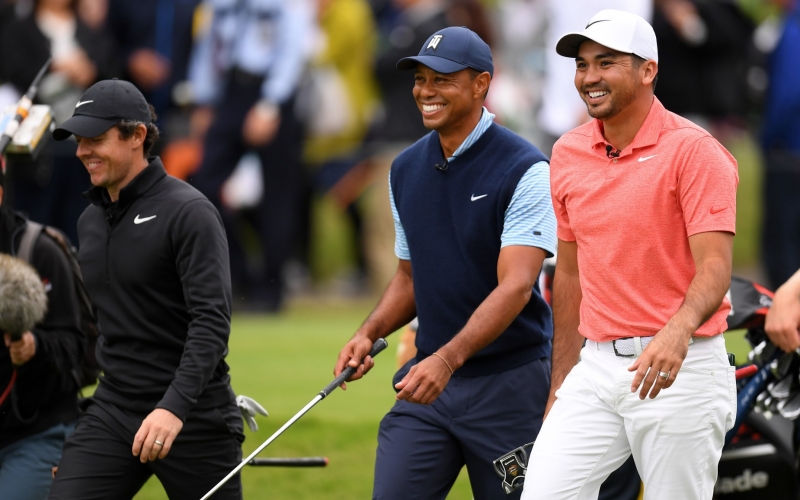 By Alex Myers
Welcome to another edition of The Grind, where, believe it or not, we are actually disappointed in Tiger Woods. No, we’re not down on the GOAT for not winning MGM Resorts The Challenge: Japan Skins—although, more on that later—but rather how it all went down. You see, Woods lost to Jason Day after letting him borrow his sweater vest in the middle of battle:

Tiger literally giving people the shirt off his back. YLTSI pic.twitter.com/2Xc1V8TQxn

Is it a nice sweater vest? Duh. Was it a nice gesture? Sure, as indicated by Chris’ “YLTSI” (You love to see it) acronym. But actually, I hated to see it. The old Tiger would have frozen out his competition. Literally! And, no offense to Jason, but we all know how fragile he can be. He wasn’t winning in short sleeves. Anyway, there’s plenty more to talk about, so grab something to keep warm and snuggle in.

Justin Thomas: I was going to say Justin Thomas in Asia, but it doesn’t matter where this guy is playing these days. The red-hot Thomas continued his recent roll after returning from a wrist injury in the spring, winning the CJ Cup @ Nine Bridges for the second time for his eighth consecutive finish of T-12 or better. JT now has 11 PGA Tour titles, becoming one of only five modern players (Jack, Tiger, Rory and Jordan being the other four) to reach that mark with at least one major before turning 27. 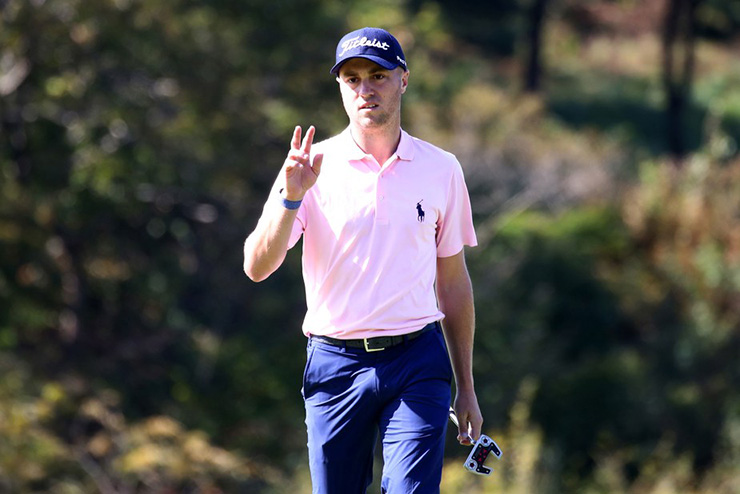 Funny enough, Golf Digest recently asked Tiger, Gary Woodland, and Billy Horschel who the most underrated PGA Tour pro is and they all said Justin. While everyone (other than Brooks Koepka) focuses on the Brooks-Rory rivalry, this guy might wind up passing them both.

Nicolas Colsaerts: The author of one of the most impressive one-match performances in Ryder Cup history (An eight-birdie, one-eagle barrage against Tiger and Steve Stricker at Medinah in 2012) wrote an amazing new chapter in his career with a win at the French Open, his first tournament title in more than seven years. And he. hugged the trophy like he would hug a long-lost relative. 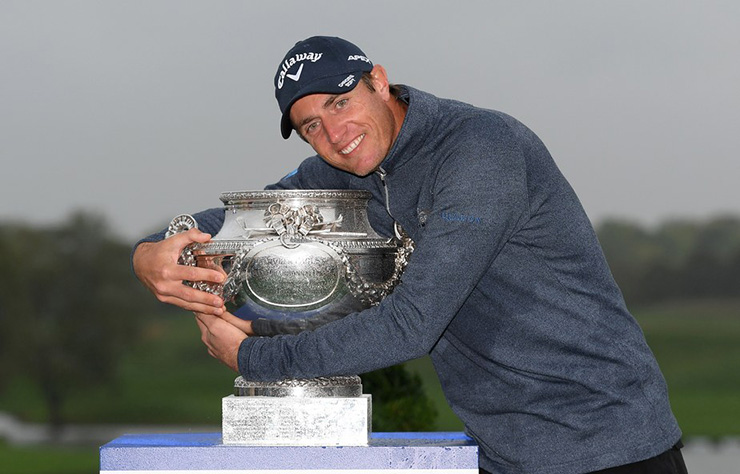 “This win changes everything for me for the next couple of years. I will now have a lighter schedule and not have to worry about having a card. I have a wife and a little kid that I am going to be able to spend a bit more time with now.” Awesome. Also awesome? His nickname on the European Tour is “The Dude.”

The Challenge: Japan Skins: Full disclaimer: Golf Digest and GOLFTV, which put on this event, are owned by the same company. But I am not being held hostage in an office closet when I say this new competition was a success and a welcome addition to the golf calendar. I swear. 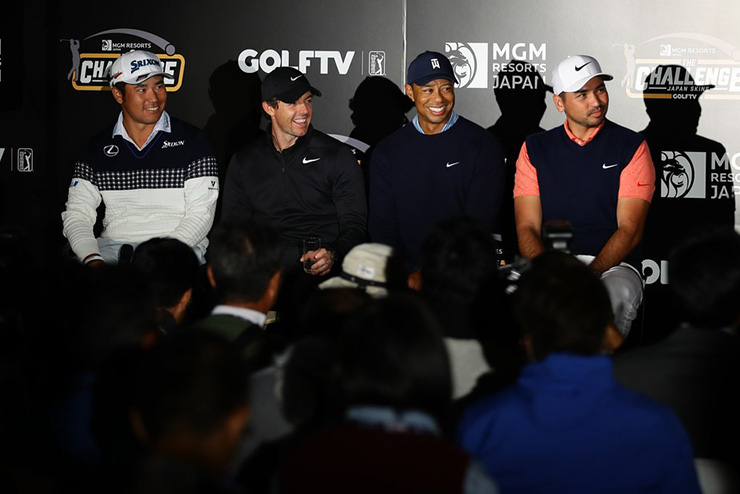 Yes, the four participants (Tiger, Jason, Rory McIlroy and Hideki Matsuyama—pretty decent foursome!) all could have played better, but what can you do? Skins golf is back, baby! And the “lower” stakes actually made it more fun to watch—especially two of the challenges, which gave us this incredible up-and-down by Day from a bunker using a 6-iron(!):

The up and down that made Jason Day your #TheChallengeJapanSkins champion. ? pic.twitter.com/g7r5N6ELCI

And Bryan Habana (Each of the four players teamed up with a rugby star to play alternate shot on a hole) jumping on Hideki Matsuyama to celebrate a birdie:

Hideki and Rory will both remember the 7th for two very different reasons.

Thank goodness Tiger’s partner didn’t do that to him.

Tiger in Skins games: The safest bet in sports is betting against Tiger in this format (or in most made-for-TV events, really—I painstakingly ranked all of them). Combined with his unsuccessful six tries at the original Skins Game, Woods now has a career 0-7 record in skins competitions. Again, this is the same guy with 15 MAJOR titles. Bizarre. As Woods says, “Skins is all about timing,” but that’s a lot of bad timing for a man who routinely produces magic on the golf course.

Tiger’s practice putter: What in the world is this thing?

Tiger tinkered with a new TaylorMade putter before going to the first tee. pic.twitter.com/ncxL3515cV

Look, I’m sure it’s a fine product, but we’ve been down this road with Woods so many times. He makes a change from his trusty Scotty Cameron and then a few months later he goes back to it. The cycle is a waste of time for a player who is approaching his 44th birthday and has undergone more surgeries than most football players. Please stick with that trusted Scotty and don’t waste anymore time, Tiger. Please! The clock is ticking!

58 penalty strokes: I like the new rule that caddies can’t line players up for putts. And Lee Ann Walker, a former LPGA player, clearly made a mistake by breaking that rule at the Senior LPGA Championship. Many times over. But assessing someone 29 separate two-stroke penalties for the same thing seems a bit draconian. (Side note: I’ve been wanting to use the word “draconian” my whole life and now I have! What a rush!) “I may have made the Guinness Book of World Records,” she said after. If Guinness keeps track of such a thing, there’s no “may” about it.

The PGA Tour heads to Japan for the inaugural Zozo Championship, AKA that event where Tiger Woods will have his final audition to be named a Presidents Cup captain’s pick. We’re not sure if Tiger being the guy to make that ultimate decision puts more or less pressure on him. Stay tuned.

Random tournament fact: No one has ever won a Zozo Championship after winning The Challenge: Japan Skins. Good luck to Jason Day on attempting to make history this week.

—Jason Day has added some outerwear in his golf bag for the Zozo: LOCK

Just Tiger, Rory, and two rugby players yucking it up: Helen Alfredsson, 54, won the Senior LPGA Championship and then did an actual victory dance:

How does one celebrate a Sr. major title at the volunteer party? Alfie never disappoints. pic.twitter.com/TF8pTmAXac

Well played. And speaking of things well played, I consider myself a decent ping-pong player—and I’m sure Ben An does too. But his dad is a former Olympic medalist in the sport, and my word, is he a marvel. Watch as pops takes on his son using a WOODEN SPOON instead of a paddle:

Ping pong … with a spoon. ?@ByeongHunAn's dad was an olympic medalist in table tennis … and Ben has yet to win against him. ? pic.twitter.com/7j2SCc5FVJ

And you thought Jason Day’s 6-iron out of a bunker was impressive.

“I’ve been out here for, what, five years. Rory hasn’t won a major since I’ve been on the PGA Tour. So I just don’t view it as a rivalry.” —Brooks Koepka is quickly rising up my PGA Tour Content Kings ranking!

I’m sorry @tony.romo I had to do it!!! ????? All this proves is if they put u back there for a few snaps u could shake off them ankle tackles. Now on the other hand if that was a real snake the first time u walked by it you would have gotten bit. @hissalot strikes again. #gottem #hewasntready #gotstobemorecareful #puthimincoach #whitemencanjump #tonytoetap #dontlaughitcouldhappentoyou

Although, it took Tony a long time to see it. Talk about being focused on your game. No wonder he’s the current King of celebrity golf. However, one of his biggest challengers, Stephen Curry, just inked an equipment deal. . .

All eyes #lockedin on year 11, but my passion for growing the game of golf never stops. Hyped to officially announce my partnership with @CallawayGolf to bring the game to underserved and underrepresented youth! #RuinTheGame pic.twitter.com/FNQVLnRLuZ

Things are really heating up on the celebrity golf circuit!

A big thanks to @puma for helping make our honeymoon possible!

I love how Rickie says their honeymoon was “made possible by Puma,” as if the couple couldn’t have afforded a honeymoon on their own. Anyway, cue the Billy Joel!

“Rickie and Allie were the popular steadies and the King and the Queen of the prom. Riding along in Puma’s G5 with the radio on . . . “

Sorry, couldn’t help it. And yes, let’s hope they end up better than Brenda and Eddie.

Phil posted a new “Phireside with Phil” in which Haotong Li explains a funny mix-up over something he said following a victory:

Found a candle so we shot a #PhiresideWithPhil in China with @haotong_li. Athletes often claim to be misquoted by the media. This is a pretty big misquote ? pic.twitter.com/T3xc3qPp2M

And shared his latest calf-off:

Traveling the world looking for a legitimate calf challenger. I found the best calves in Asia and although it was close, it wasn’t to be. Thank you for a strong effort Joe!

Congrats to Danielle Kang for defending her title in Singapore. When it comes to winning in Asia, she’s quickly becoming the Justin Thomas of the LPGA. . . . Brooks Koepka withdrew from the CJ Cup with a bad knee after undergoing a stem-cell knee procedure in the off-season. Ruh-roh. Hopefully, his biggest rival isn’t his own body. . . . Matt Every was suspended 12 weeks for violating the PGA Tour conduct policy for drugs of abuse with his medically prescribed cannabis. This doesn’t seem fair. . . . Viktor Hovland set a new PGA Tour record with an amazing 19 consecutive rounds in the 60s. Making a tough sport look that easy also doesn’t seem fair. . . . And finally, I noticed this on my latest trip to the grocery: 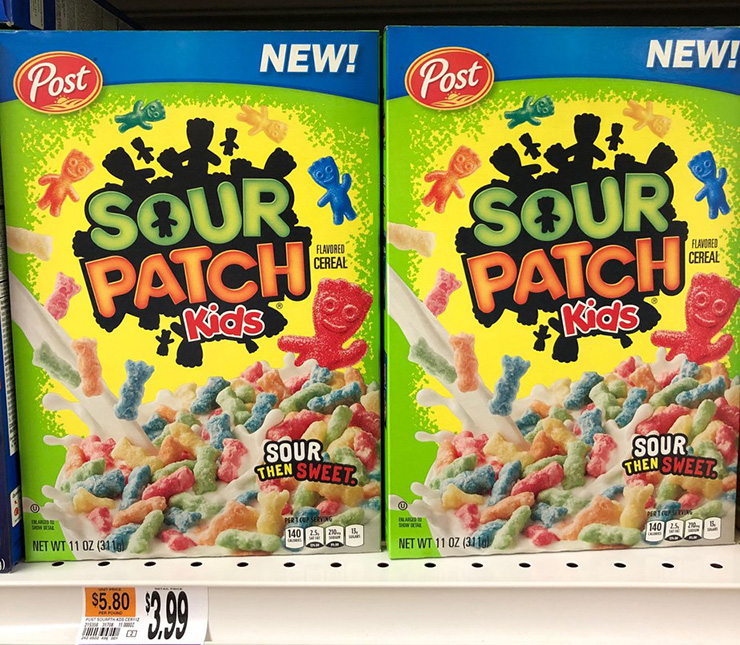 Sour Patch cereal? Even I think that’s taking things too far. And I’m someone who has eaten Chips Ahoy cereal.

What would Phil think of my calves?

How much would Rickie-Allison baby naming rights go for?

How many sweater vests does Tiger Woods own?