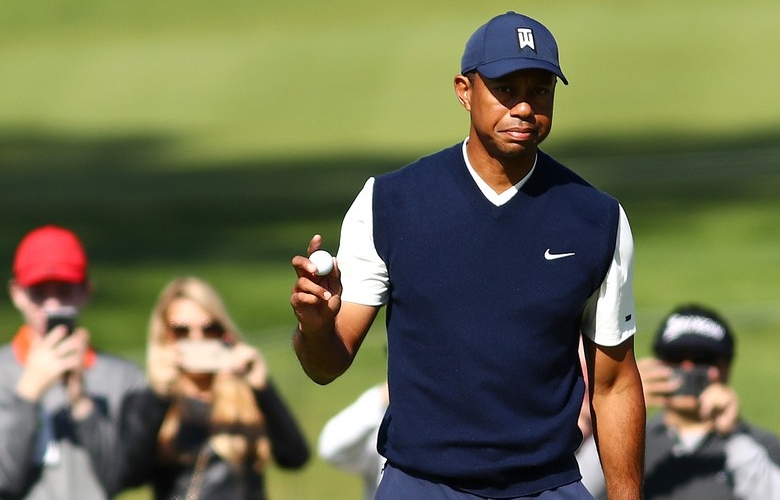 PACIFIC PALISADES, CALIFORNIA – FEBRUARY 15: Tiger Woods of the United States acknowledges fans on the 15th green during the third round of the Genesis Invitational at Riviera Country Club on February 15, 2020 in Pacific Palisades, California. (Photo by Tim Bradbury/Getty Images)

Historically, and also on Saturday. Woods four-putted the 13th hole and needed 33 putts overall in shooting a five-over 76 at Riviera Country Club, his second-straight round over par and his worst score of the 2019-’20 season. Sitting 15 strokes back of the leaders, Woods’ winless streak at Riviera will reach 13, the most times he’s played a PGA Tour event at a single course without a victory.

“I didn’t putt well today at all,” Woods said. “I didn’t have a feel for it, I didn’t see my lines, I couldn’t feel my pace and I was just off.”

Woods dropped nearly five shots to the field on Riviera’s Poa annua putting surfaces, which are prone to getting bumpy in the afternoons. But Woods teed off at 8:47 a.m. local time and had no one to blame for his poor performance but himself.

“There are times when I’m sure any of us have struggled on the greens and you feel like you’re not rolling the ball in the hole, but kind of jamming it in the hole,” Woods said. “Uphill putts, I was just trying to rap in there, take the lowest line and try to wrap them in there. Then blow it by four, five, six feet. That was a constant theme this entire day.”

The day started with a stress-free par—always a welcome development at the devilish par-4 10th—but quickly spun off the rails after a disappointing bogey at the par-5 11th despite being greenside in two. After a par on 12, Woods hit a solid approach at the dogleg-left 13th to set up a birdie effort from 18 feet.

He missed. He missed again. He missed again. And then, it should be noted, he poured a three-footer right in the centre for double bogey. The four-putt was the second in as many tournaments, third in the last year, fourth since 2018 and the 14th his made in a PGA Tour event in his career.

It wasn’t all negative—Woods birdied the first and third holes to claw back to three over for the round but three-putted Nos. 4 and 9 before signing for 76.

When asked if there are any positives to take away from Saturday, Woods smiled and said, “I’m done.” He’s been run down all week, he says, due to the additional obligations that come with playing host of this event, which he puts on in conjunction with his TGR Live venture. Woods said that before Thursday’s warmup, the only time he hit balls this week was for 10 minutes before his 6:40 a.m. pro-am tee time.

Certainly, the busy schedule is a large reason he decided to skip next week’s WGC-Mexico Championship, a tournament he finished T-10 in last year.

“Well, the idea is to peak around Augusta time. I just felt I wasn’t going to be ready for next week, a little rundown and playing at altitude as well isn’t going to help that, so take the week off.”