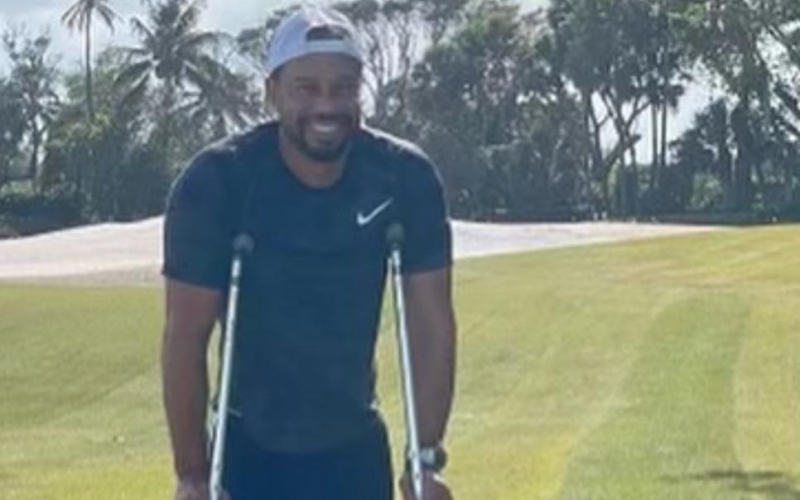 By Daniel Rapaport
A smiling Tiger Woods, on crutches and with his dog by his side, posted the first picture of himself since his Feb. 23 car accident to Instagram on Friday afternoon.

“My course is coming along faster than I am,” Woods wrote. “But it’s nice to have a faithful rehab partner, man’s best friend.”

The picture, which is somewhat blurry, shows Woods’ right leg in a brace that runs all the way up to his knee. It also appears that Woods lower leg is in a cast.

With the course remark, Woods is ostensibly referring to the ongoing remodel of his backyard practice facility at his home in Jupiter Island, Fla. Aerial images that surfaced last week appeared to show the area under construction.

Woods suffered comminuted open fractures to both the tibia and fibula bones in his right leg after his vehicle tumbled off the side of Hawthorne Avenue near Los Angeles. He received initial treatment at Harbor-UCLA Medical Center before he was transferred to Cedars-Sinai Medical Center for further treatment. Woods returned to his South Florida home to continue his recovery in mid-March.

On April 7, the Los Angeles Country Sherriff’s Department released the findings of its investigation into the accident. Authorities determined that speed was the primary cause of the wreck—Woods was driving between 84 and 87 mph when he lost control, on a road with a 45 mph speed limit—but reiterated that there were no signs that Woods was impaired while driving. He has not been charged in connection with the accident.

There remains, of course, no timetable for Woods’ return, but all his communications since the accident have suggested that he does intend to rehab the injury, ostensibly with the hope of returning to golf sometime in the future.

“I will continue to focus on my recovery and my family,” Woods wrote shortly after the Sheriff’s Department’s press conference, “and thank you for the overwhelming support and encouragement I’ve received throughout this very difficult time.”