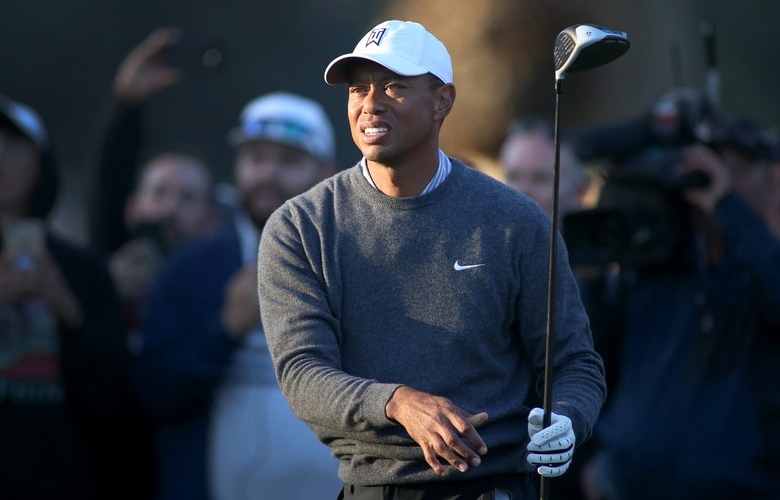 Katharine Lotze/Getty Images
Woods tees off on the 11th hole during round two of the Genesis Invitational at the Riviera Country Club on February 14, 2020, in Pacific Palisades, California.

On Thursday, he still managed to get to the Riviera clubhouse with a two-under 69. On Friday, not so much–Woods posted a two-over 73 that included a double bogey from the middle of the fairway and three bogeys in a four-hole stretch.

It’s Woods’ first over-par round of the 2019-’20 season and highest score in relation to par since last year’s Northern Trust in August, including the unofficial Hero World Challenge event in December.

“I was not sharp today,” Woods said. “I just could not get the ball close enough to the hole to give myself good putts. And then when I did, I was in the wrong spots. I was above the hole and had to putt pretty defensively.”

At even par for the tournament, Woods looks safe to make the cut but will find himself well back of contention heading into the weekend.

Woods got things off on the right note again on Friday, albeit in less inspiring fashion. In Thursday’s first round, he drained a 24-foot, 8-inch eagle putt on the opening hole, bringing to mind the two jersey numbers the late Kobe Bryant wore during his Hall of Fame basketball career. On a frigid Friday morning—at least by Southern California standards—Woods birdied his first hole of the day after laying up short of the driveable par-4 10th.

He was cruising nicely until disaster struck at the par-4 15th. Woods piped his tee shot 335 yards down the center but fatted a pitching wedge approach, resulting in a plugged lie and an impossible up-and-down from a greenside bunker. He hacked out to just over the green but needed three from there for a momentum-zapping double bogey.

That poor shot with a scoring club was a bit of a theme. On Thursday, Woods struggled mightily with the driver, finishing 118th in the 120-man field in strokes gained/off the tee. He drove it reasonably well on Friday, but just as that part of his game tidied up, the iron play faltered. Woods missed the green six times from 150 yards or less in the fairway, including dumping a sand wedge into the bunker short right of the third green, leading to another bogey. After leading the tournament in strokes gained approach on Thursday, he lost over a stroke to the field with the irons on Friday.

Woods also bogeyed both par 3s on the front nine and scrambled for par at the ninth, his last hole of the day, to ensure he’ll stick around for the weekend.

He attributes the uneven play to a busy week of playing double duty, given his responsibilities as the host of this event.

Next up for Woods is a likely early tee time on Saturday morning. After that remains a question mark—Woods declined to say whether he’s decided to play in next week’s WGC-Mexico Championship.

“I’ve been so busy with this event and trying to deal with all the little things that I haven’t really focused on next week,” Woods said. “I’ve had a lot to do this week and trying to get ready to play, try and balance both of those.”