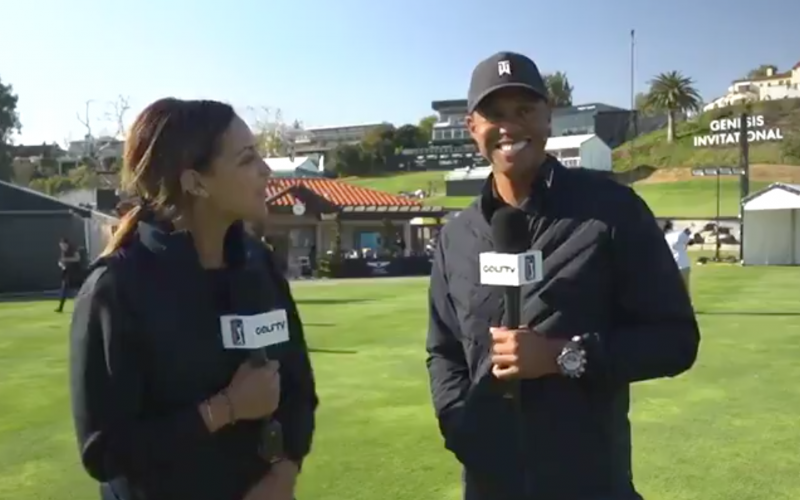 By Coleman Bentley
It’s been a hectic couple days in the wild world of celebrity golf. Just about the same time Larry Fitzgerald was wrapping up another Pebble Beach Pro-Am title on Sunday, Hollywood’s biggest stars were assembling on the red carpet for the 92nd Academy Awards just a couple of hours south. In attendance? Ray Romano, who played 54 holes up the coast before jetting down to present. But there’s no rest for the wicked . . . famous, that is, who assembled once more at Riviera Country Club on Monday for the Genesis Invitational Celebrity Cup.

The stars were out at Riv for a fun-filled day of golf at the #CelebrityCup.

Pitting Team Woods vs. Team Watson in a knockdown, drag-out no-holds-barred battle for celebrity golf supremacy friendly seven-on-seven competition, the 2020 Celebrity Cup still hung in the balance when Michael Pena drained an eight-footer on 18 to claim the title for Tiger’s black-clad ballers. It was Woods’ second consecutive victory in the competition, driven in large part by his tough-love coaching style, on full display in this video of him roasting (or rather lightly toasting) the swings of his A-list teammates before the match.

It’s all encouragement and compliments until Oliver Hudson shanks one dead left, unleashing the dam of trash talk just waiting to burst loose inside of Woods. “Is that on camera? Did we get that one on camera?” he pleads.

Then it’s on to A-Rod, who showed up with no glove and FOUR 4-irons in his bag. There’s almost too much material to work with, so Woods starts small, suggesting A-Rod lose the lanyard, which is wise advice both on the range and in practically any social situation a human being can find themself in. Yes, this is the same man currently dating J-Lo. No, we do not understand it, either.

Finally it’s on to Chris Pratt, who brought his own coach to the Celebrity Cup, taking home hardo of the week honors in the process. Pratt—global superstar, Marvel superhero, new-age Indiana Jones—is almost sent running for the port-a-john by the mere sight of Woods, but he eventually settled down, even managing to pull it together for an impressive sand save down the stretch.

All in all, there’s more entertainment value in these three minutes than in three hours of watching celebrities accept awards from each other and complain about milk. Just don’t go too hard on these guys, Tiger. As fun as it is to watch, a good captain always knows when to lay up.