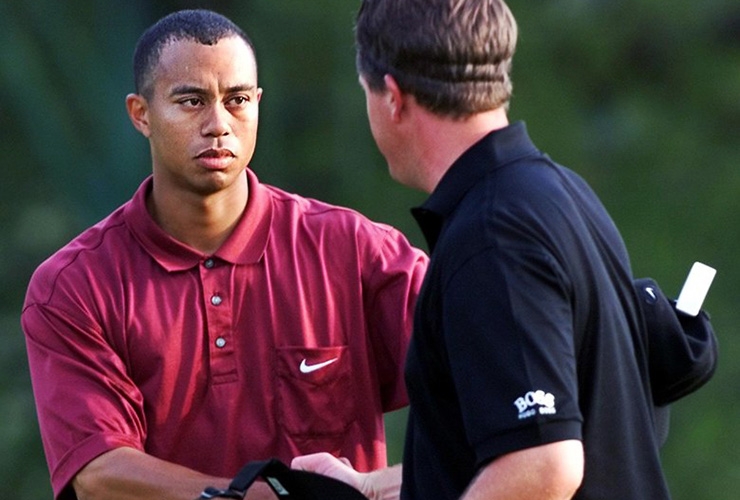 Tiger Woods shakes hands with Phil Mickelson after the final round of the 2001 Masters. (JEFF HAYNES)

By Alex Myers
Tiger Woods and Phil Mickelson promised golf fans plenty of trash talk ahead of last year’s “The Match” in Las Vegas. Turns out, Tiger’s best jab—or, at least, best-timed one—came during their famed final-round duel at the 2001 Masters.

Woods was trying to win a fourth consecutive major championship that Sunday (what would become known as the “Tiger Slam”) but first, he had to go through Mickelson in what was the first and only time they would be paired in the final group during the final round at a major. Woods bogeyed the first hole to fall into a tie with Mickelson and the two remained within one shot of each other until No. 11, where Woods birdied while Mickelson bogeyed. After a bogey by Tiger on No. 12 cut his lead to two over Mickelson and dropped him into a tie with David Duval (yeah, this was a good one), a slightly steamed Woods out-drove Mickelson on the next two holes, which is how we come to the point of this post.

Now Woods outdriving anyone in 2001 wasn’t a surprise, but as Tiger tells it, he did it with a 3-wood on both holes, which prompted Mickelson to finally break the silence between the two during a tense day by asking, “Do you always hit a 3-wood that far?” Tiger’s response? Well, let’s let the 15-time major champ deliver the punchline himself in this old video Skratch dug up from a golf clinic Woods conducted:

#TigerTuesdays
One of the few conversations between Tiger and @PhilMickelson on Masters Sunday in 2001. pic.twitter.com/Bet6sqc4bi

“I usually hit it a bit further,” Woods says in the video. “I just kept right on walking.” Boom. Nailed it. Both those 3-woods and that response.

“Just a typical answer from a smart-aleck like myself,” he added.

Woods wound up winning by two shots over Duval and by three over Mickelson, who remained without a major until his first of three Masters titles in 2004. The victory gave him an unprecedented four professional major titles in a row and five in six starts. It also gave him another great story to tell.