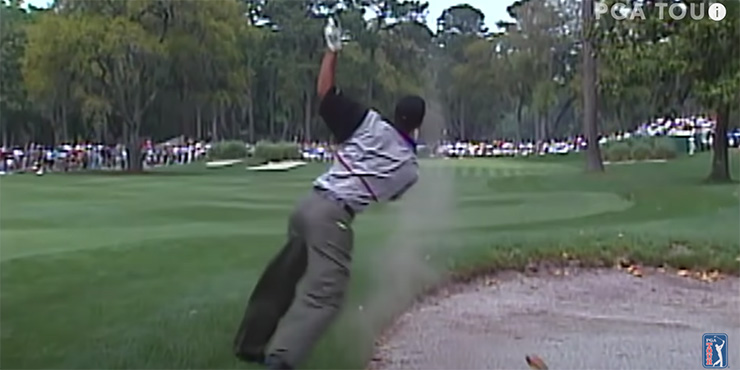 By Alex Myers
Despite his yacht making a mysterious stop at a marina near Hilton Head last week, Tiger Woods is not at this week’s RBC Heritage. With more than four months passing since Tiger last teed it up in an official PGA Tour event, there was speculation he might add the tournament to his schedule. Instead, he stuck to his normal gameplan.

The five-time major champ has only played in the tournament one time in his career. In typical Tiger fashion, though, he managed to create an incredible highlight that has stood the test of time.

Woods finished T-18 at the 1999 RBC Heritage—then known as the MCI Classic—with rounds of 70-70-69-71. For someone who already had eight PGA Tour wins under his belt, including a 12-shot win at the 1997 Masters, the week wasn’t particularly memorable. But this shot he hit on Harbour Town’s 6th hole during the first round was:

How the. . . ? More than two decades later, the shot is as jaw-dropping as ever. Let’s take another look at that follow-through: