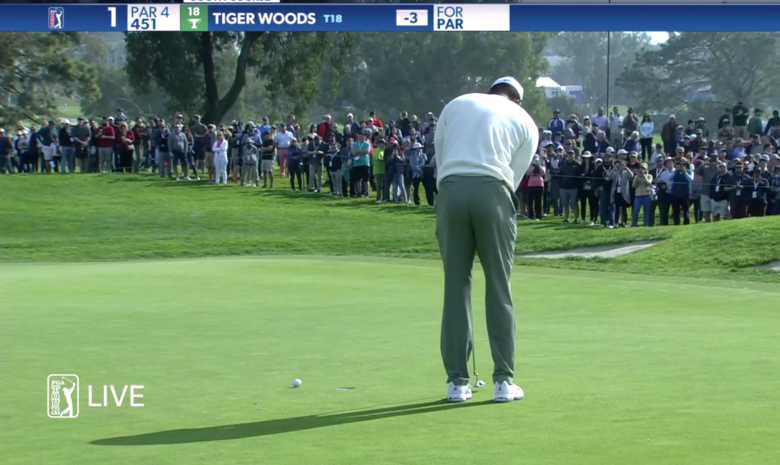 By Alex Myers
For all of Tiger Woods’ success at Torrey Pines, the South Course’s opening hole has given him fits. But while the Big Cat posting a big number on the 456-yard par 4 isn’t too surprising, the way in which he did on Friday certainly was.

Woods striped a drive to start his second round at the Farmers Insurance Open then hit a short-iron right at the flagstick. Although, he misjudged the distance a tad, Woods was left with about 20 feet up hill for his birdie putt. That’s when things got crazy.

A bad misread or a pull—or both—left him a good two feet left of the cup for par. Clearly not overly concerned, Woods didn’t mark his golf ball, but blasted what seemed like a gimme through the hole. Now faced with about six feet for bogey, Tiger took his time … and missed again. He tapped in for a four-putt double bogey to drop back to one under after a solid 69 on Torrey Pines’ North Course on Thursday.

Incredibly, Woods double bogeyed the first hole three out of four rounds in regulation during the 2008 U.S. Open (he made par in the Monday playoff against Rocco Mediate). Of course, more incredibly, Woods won the tournament on a broken leg.

But none of those doubles involved a four-putt. In fact, according to 15th Hole’s Justin Ray, this is Woods’ first four-putt in his 19th appearance at the Farmers Insurance Open. And it’s his first four-putt anywhere since the third round of last year’s WGC-Mexico Championship.

In addition to that epic victory at the 2008 U.S. Open, Woods has won the PGA Tour’s annual stop at Torrey Pines a record seven times. This unexpected speed bump, however, leaves him with a lot of work to do if he’s going to add to that total.