Tiger Woods halts practice round due to stiffness at Liberty National, still looks forward to ‘tiredness’ of FedEx Cup Playoffs 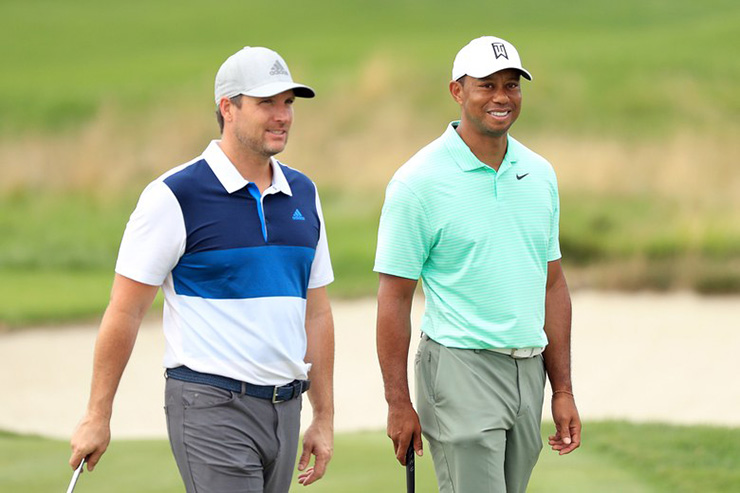 By Joel Beall
Wednesdays on the PGA Tour usually come with a relaxed feel infused by the assortment of Average Joes hacking it around in the pro-am. But on this Wednesday at the Northern Trust, that informality was replaced by tension and worry thanks to a scare from Tiger Woods.

Woods, 43, is making his first appearance since a quick-out at the Open Championship, where he noticeably—and admittedly—struggled with his body coming off a month-long respite after the U.S. Open. “I’m just not moving as well as I’d like,” Woods said at Royal Portrush. That display, coupled with his injury history, bestowed a sense of intrigue in New Jersey this week, not only on Woods’ physicality but whether he’s able to meet the demands of the FedEx Cup Playoffs.

Though Tuesday’s practice round was promising on that front, Wednesday amplified the wonder.

Near the end of his first nine at Liberty National, Woods appeared to be in pain, wincing after a handful of shots. He decided to pack it in on the pro-am at the ninth, refraining from hitting full swings for the rest of the morning.

Woods did continue to walk with his amateur partners on the final nine holes, and he threw down balls around greens to work on his short game. His spirits also were up, chatting with his group and briefly meeting PGA Tour commissioner Jay Monahan. Nevertheless, word of Woods’ decision quickly spread and became the talk of the course.

“This is how it is,” Woods said by the Liberty National clubhouse. “Some days I’m stiffer than others. Yesterday, I was out there driving it great. … Today, I’m stiff. Hopefully, I’m not that way tomorrow.”

Woods tried to placate worries by adding that “it’s best to be smart” about matters like this, and that halting his round was merely precautionary.

Since his April win at Augusta National, Woods has made four starts, missing the cut at the PGA Championship and Open Championship to go with a T-9 at the Memorial and T-21 at the U.S. Open. Woods said his schedule is a byproduct of last season’s workload, in which he played seven times in nine weeks.

“Coming back from my procedure and not really knowing what to expect, I pushed it pretty hard,” Woods said. “Vowed I would never do that again.”

Because the tour reconfigured its schedule, Woods said it has been a challenge to figure out how to stay sharp while maintaining his health.

“I can’t practice as much as I’d like, can’t sniff what I used to practice,” Woods said. “To try to build up to events is more difficult.”

Despite the limited schedule, Woods is 28th in the FedEx Cup standings. With the top 70 after this week at Liberty National advancing to next week’s BMW Championship, the 15-time major winner is guaranteed a spot into the next round. Still, he will need solid performances this week and next to solidify a return to the Tour Championship, where he is the defending champ.

Looking ahead, Woods mentioned concerns about the workload of the playoff schedule.

Though the overall tenor of the media session was dour, Woods remained upbeat about the next few months, including the Presidents Cup, which he will captain for the U.S. team. On Tuesday night, Woods gathered about 20 American hopefuls, preaching that although eight are guaranteed spots after the BMW Championship, the four wildcards—one of which could include Woods—are wide open.

“I’m like them,” Woods said of the aspiring candidates. “Even the guys 50th, 60th in points can still win some events, or play well with the nine events we have and grab a pick.”

Woods, who has finished runner-up in two previous outings at Liberty National, is scheduled to tee off on Thursday at 7:43 a.m. with Scott Piercy and J.T. Poston.