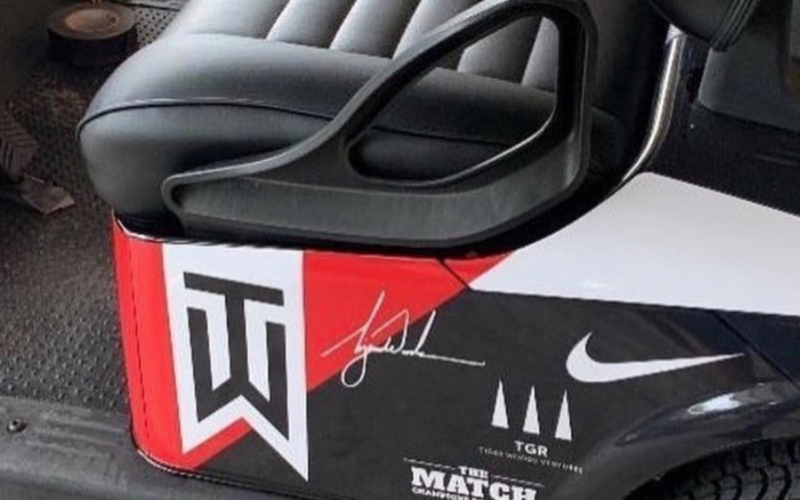 By Christopher Powers
One of the coolest aspects of last Sunday’s TaylorMade Driving Relief event was seeing four of the world’s best players carrying their own bags. None of them opted for a pushcart, instead hoofing it like the rest of us peons. Not only did viewers enjoy the hell out of it, there was even a full-fledged debate over how Dustin Johnson was carrying his bag. If that’s not the most Golf Twitter debate ever, please point me to a better one.

This Sunday’s The Match: Champions for Charity, will look a little different, as Tiger Woods, Peyton Manning, Phil Mickelson and Tom Brady will each have their own carts. Roll your eyes accordingly, golf purists.

To be fair, Tiger and Peyton should never carry their own bags given their injury history. As for Phil and Brady, they aren’t exactly spring chickens themselves. Carts should be encouraged in this old man foursome, especially when they look like Tiger’s personalised cart, which is 10 times as kingly as you could ever imagine:

Yep. Fire flames, as the kids say. Honestly, did you expect anything different? A 15-time major champ playing at Medalist, his home club, ain’t going to be rolling around in a standard, gas-powered E-Z-GO like the rest of us. If you notice, it looks like there will be cameras mounted on it, and hopefully they’ll catch Woods secretly talking smack on the way to his drives.

The question is, what will the other three carts look like, and can any of them compete with TW’s? After seeing those pictures, we doubt it.