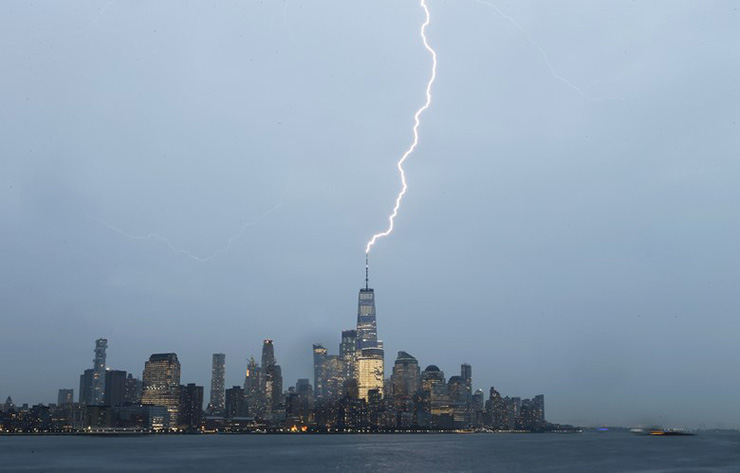 By Joel Beall
Tiger Woods will be greeted by a surreal sight Thursday morning at the Northern Trust. And we’re not referring to the Manhattan skyline.

On Wednesday afternoon a vicious storm rolled through the New York metropolitan area, with a tornado touching down just miles from Liberty National, site of this week’s FedEx Cup Playoff event. The course did not receive the brunt of the weather, although failed to escape unscathed.

Due to heavy rain and winds up to 60 mph, stands, hospitality venues, signage, tents, and fences were damaged. Andy Vasquez of the New Jersey Record also captured steal gates laying on the hoods of several courtesy cars:

Also, not a great day for a couple of courtesy cars. pic.twitter.com/apTKjaaAfd

PGA Tour and tournament officials confirmed Wednesday night that no one was hurt. However, fans won’t be allowed onto Liberty National until 10:00 a.m. on Thursday, as maintenance crews race to repair damage to the course.

The tournament, though, will still begin the first round its scheduled time at 7:10 a.m., meaning half the field—including Woods, who tees off at 7:43 a.m.—will complete most, if not all, of their front nines without spectators.

“We’re an outdoor sport, so Mother Nature is bound to show up and change our well-laid plans on occasion,” said Julie Tyson, executive director of the Northern Trust. “We look forward to welcoming the world’s best players—and all of the fans who have been waiting for this event all year long—to the kickoff of the FedExCup Playoffs tomorrow.”

Luckily for players, galleries and tournament officials, the weekend forecast calls for temperatures in the mid-80s with a minimal chance of rain.