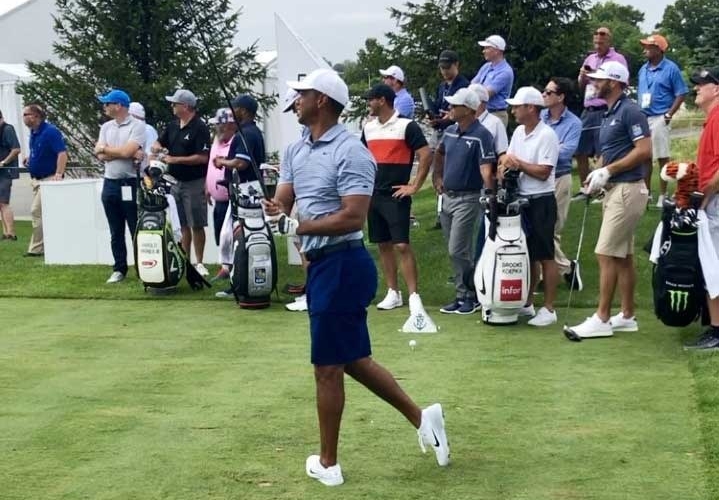 By Alex Myers
JERSEY CITY, N.J. — Tiger Woods had waited nearly six years to get another crack at Liberty National, but before he could hit a single ball Tuesday it was time to wait again.

Just moments after Woods arrived on the range, a horn blew signalling everyone to leave the premises. Yes, even 15-time major champs have to seek shelter.

An hour and 20 minutes later, Woods was back on the range to finally, actually begin preparation for the first of three FedEx Cup Playoff events played over three consecutive weeks. That is, if he qualifies for all three. Woods enters this week’s Northern Trust in 28th place in the FedEx Cup standings, and he’ll need to stay in the top 30 through next week’s BMW Championship if he’s to advance to the season-ending Tour Championship and defend his title from a year ago.

Based on how he looked Tuesday, Tiger doesn’t seem too worried.

After a 40-minute warmup, Woods went to the first tee with Brooks Koepka, Dustin Johnson and Harold Varner III. It was a marquee foursome that would have drawn incredible crowds if fans had been allowed on the premises. But with the practice round closed to the public on Tuesday, it was a relaxed atmosphere among some of the biggest names in golf.

Varner might not have the résumé of his playing partners, but he was clearly the comedian of the group. Following a nine-hole loop around Liberty National that began on No. 1 and ended on No. 18, Woods was asked who the funniest player on tour is as part of a GOLFTV video. His initial response was, “Well, we just played with one of them,” referring to the 28-year-old Varner.

Why did Tiger & Co. take such an unusual route for their half-round? Liberty National’s ninth hole is so far from the clubhouse it feels like a weekend trip to the Jersey Shore, so the foursome cut over to No. 17 after playing No. 7. They may have cut in front of a group playing the 16th that included recent Open Championship winner Shane Lowry, but apparently, two 2019 major champs out-rank the Champion Golfer of the Year.

As for Woods’ play, it was solid outside of a lost ball in the high fescue left on the par-4 sixth. Just a guess, but a Tiger-sized gallery would have found it during a tournament day.

He birdied the first hole—different than the first hole used for the 2017 Presidents Cup—but hit two balls off several tees, as well as multiple approach shots in addition to a variety of chips and putts around Liberty National’s undulating green complexes. All the while, Woods, still the only two-time FedEx Cup champ (2007 and 2009), consulted with coach Matt Killen as he has since this year’s Players Championship. Woods also stopped by the practice green before calling it a day. 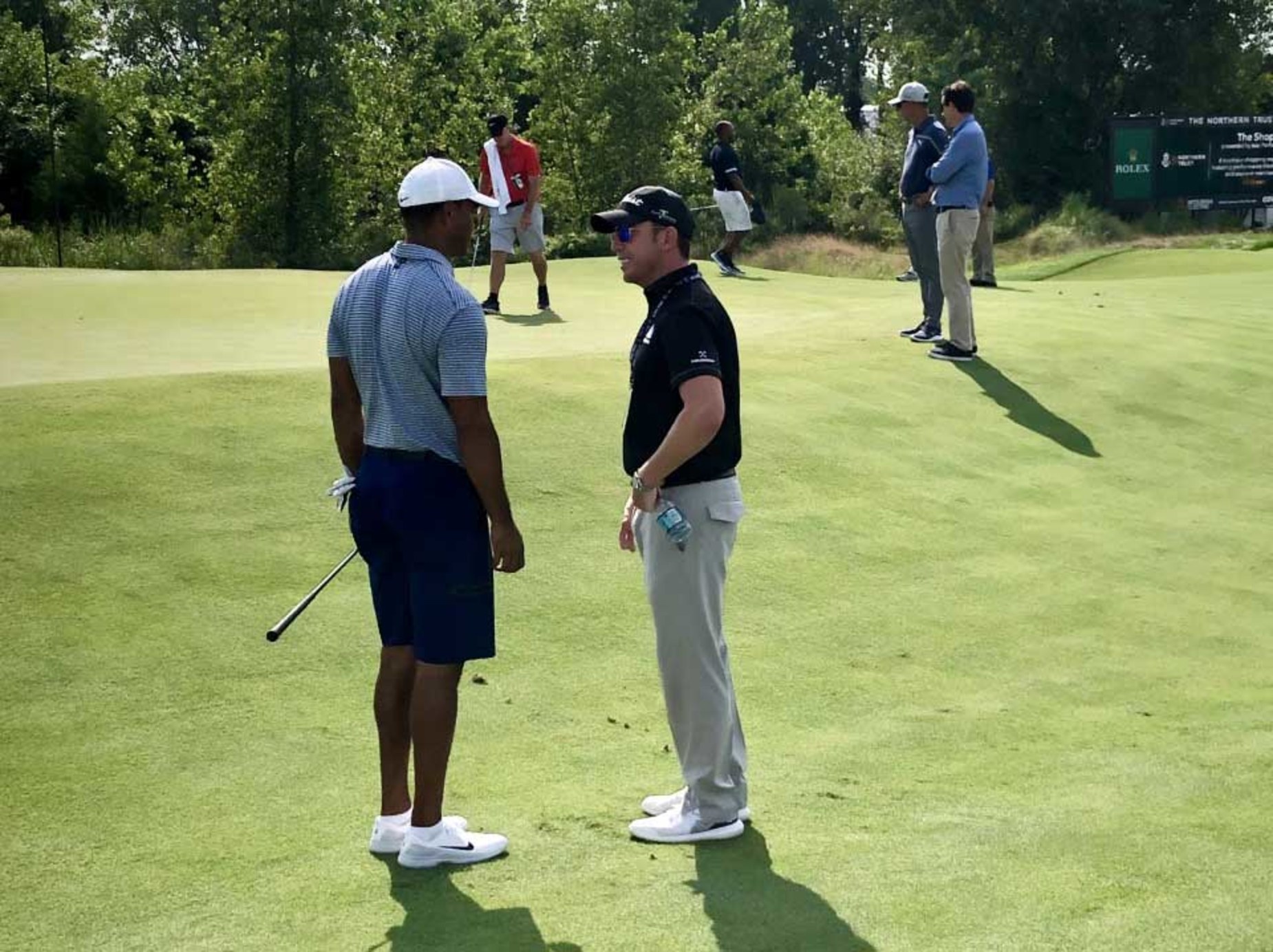 Woods is making his first start since missing the cut at last month’s Open at Portrush. Following that performance, he said, “I just want to go home.” But he seemed to be in a better mood on Tuesday, perhaps in part because of the balmy New Jersey weather.

He certainly looked better physically than the last time he played Liberty National during the final round of this event in 2013. It was then when Woods crumpled to the ground after hitting his approach on the par-5 13th, the beginning of the back problems that would plague him the rest of his career. Woods returned as an assistant captain at the 2017 Presidents Cup, where he acknowledged he could “definitely” see a scenario in which he wouldn’t play professional golf again.

Instead, remarkably, Tiger returns to tee it up again ranked No. 5 in the world and having added a fifth green jacket to his collection in April. After waiting nearly 11 years in between majors and 14 years in between Masters titles, no delay—especially one involving a horn—seems too bad these days.