Tiger Woods’ comeback resumes where the good memories outnumber the bad, five to one 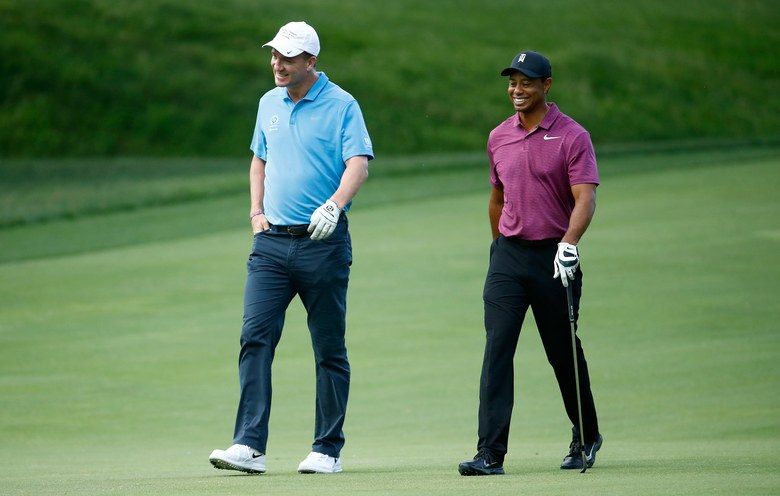 DUBLIN, OH – MAY 30: Peyton Manning and Tiger Woods walk down the fairway on the second hole during the Pro-Am of The Memorial Tournament Presented By Nationwide at Muirfield Village Golf Club on May 30, 2018 in Dublin, Ohio. (Photo by Andy Lyons/Getty Images)

By Dave Shedlosk
DUBLIN, Ohio – His comeback bid has stalled a bit in recent outings after an electric few weeks in Florida in March, but a return to a venue that has been among the friendliest to him since he turned professional might facilitate another run at his first victory in five years.

Tiger Woods is back in the Memorial Tournament for the first time since 2015. He owns a record five wins at Jack Nicklaus’ Muirfield Village Golf Club, including his last in 2012 highlighted by a spectacular chip-in on the 16th hole in the final round that Nicklaus himself called, “the most unbelievable gutsy shot I’ve ever seen.” That victory was No. 73 on the PGA Tour, which happened to tie him with the tournament host for second all-time behind Sam Snead.

“He had to rub it in my face right here, didn’t he?” the Golden Bear quipped, laughing.

Jack owns the last laugh, however. Or at least the most recent. Woods’ visit three years ago included a 13-over 85 he posted in the third round, the highest score of his career.

“It is what it is. I tried and unfortunately that’s all I had,” Woods recalled Wednesday at Muirfield Village after playing in the pro-am with former standout NFL quarterback Peyton Manning, a spokesman for Nationwide, the tournament sponsor.

“I think I’ve had two or three rounds in the 80s in my career, and, unfortunately, that was the highest one I’ve ever had,” he added. “It didn’t feel very good. I tried and unfortunately on this golf course hitting it as bad as I did it just wasn’t good enough.”

Expectations are that Woods will improve significantly in his 16th appearance here when he tees it up at 8:26 a.m. EDT Thursday with defending champion Jason Dufner and world No. 3 Justin Rose, the 2010 Memorial winner who is coming off his second win of the season at last week’s Fort Worth Invitational.

Since returning to the tour in January at the Farmers Insurance Open after a difficult 2017 that included spinal fusion surgery in April and a DUI arrest on Memorial Day, Woods has performed exceptionally on the golf course. He nearly won the Valspar Championship in Tampa in just his fourth start, finishing T-2, and he followed with a T-5 at the Arnold Palmer Invitational.

Installed as one of the betting favorites at the Masters, he ended up well off the pace, one of three starts outside the top 25. But the former world No. 1 arrives at Muirfield Village on an upswing after an encouraging effort at the Players. Woods rallied to joint 11th after closing with weekend rounds of 65-69 at TPC Sawgrass.

Nicklaus, impressed by Woods’ comeback, said he wouldn’t be surprised if the 14-time major winner climbed into contention this week. But is he ready to win again? It’s been nearly five years, since the 2013 WGC-Bridgestone Invitational at Firestone Country Club in Akron, Ohio, his 79th tour title.

“We all have to learn how to win again,” Nicklaus said, recalling how he did just that when he captured his sixth green jacket in the 1986 Masters. “I holed a couple of putts [in the final round at Augusta], and all of a sudden you remember, particularly if you’ve been a champion at one time, you’ll remember and you have that to draw on. That’s what I had to draw on. Tiger has it to draw on. But he has got to get through the barrier of not having done it for a while. When you haven’t won, that always happens and that’s human nature. But when you got a guy that’s as good as he is and as competitive as he is, he’ll break through that barrier.”

“Well, I think that it’s understanding what it takes to finish it off and get a W’,” he said. “I’ve been on runs where it just came pretty easy, and other stretches where it was very difficult. To me this is a little bit different, because I’m coming back off of not really playing for a while. And I remember the feelings when I was at Valspar, I had a chance to win there, finished second. It really felt comfortable. The last few times that I’ve had a chance, I’ve been up there on the board, I’ve felt very comfortable. Hopefully, I can just shoot the low round when I need it.”

Perhaps it will be this week. Phil Mickelson, his fiercest rival the past two-plus decades, insists it’s only a matter of time. “He’s healthy and playing at an extremely high level, and I think not only will he win again, but I think he’ll win more majors,” the popular left-hander said. “The only thing that could have held him back is injuries, and that’s exactly what has held him back.”

Woods’ last major victory was 10 years ago, at the 2008 U.S. Open at Torrey Pines, when he weathered excruciating pain from a bad knee and fractured leg. It’s difficult to fathom that a decade has elapsed since that indomitable performance. So much has happened to him since then. So many good young players have come along to help fill the void, albeit not so much that Woods’ comeback hasn’t generated universal excitement among the sporting public and the media machine.

Even when Woods himself wasn’t sure if his career was over. Which makes his latest comeback one that he is simply trying to enjoy, whether or not he ever rediscovers the winning touch.

With all the attention on Bryson DeChambeau—specifically, his length—heading into the 2020 Masters, we'd forgive his fellow golfers for being sick of talking about the reigning U.S. Open champ.