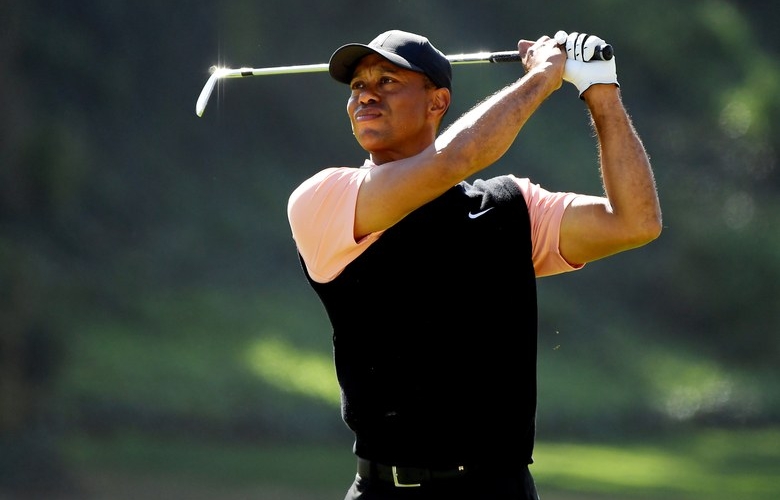 Woods plays a shot on the 7th hole during the first round of the Genesis Invitational on February 13, 2020, in Pacific Palisades, California. (Photo by Harry How/Getty Images)

Seriously. In Kobe Bryant’s city, in Woods’ first tournament since learning of his longtime buddy’s shocking death, Woods’ first putt of the day corresponded with both numbers Bryant wore during his Hall of Fame career.

Sometimes, sports do the darndest things.

“No matter what we do, I think for a while we’re going to always remember Kobe and what he meant, and especially here in SoCal and the entire sports world,” Woods said after learning of the 24-8 measurement. “Like I said, very ironic that I happened to have those numbers on those holes and those exact measurements.”

Woods opened the first-ever Genesis Invitational with a two-under 69, getting his latest bid for a record-breaking 83rd PGA Tour victory off to a solid start. He’ll enter the second round five behind Matt Kuchar, who fired a bogey-free, seven-under 64 amid perfect scoring conditions early Thursday morning and is three clear of his closest chasers.

After the goosebumps-inducing eagle at the opener, Woods added birdies at 5 and 8 to make the turn in four-under 31. It was an exhibition in ball striking: he found six of seven fairways, seven of nine greens and, most encouragingly, needed only 13 putts. Woods has long struggled with his putting here at Riviera—the site of his first-ever PGA Tour event, as a stick-thin 16-year-old way back in 1992—and joked on Tuesday that after all these years, he can’t seem to believe that every putt breaks toward the sixth tee, the low-point of the course. Perhaps he’s learned his lesson.

In hindsight, the front-nine ball striking display was particularly impressive given Woods’ lack of preparation for the week. He said after the round that the only time he hit balls this week before Thursday morning was for 10 minutes, under floodlights before his 6:40 a.m. tee time in the pro-am on Wednesday. There’s simply too much on his plate this week, given his additional obligations of hosting the event in conjunction with his TGR Live venture. So Woods pieced together a move on the driving range this morning, but you wouldn’t have known it judging from the front nine.

As Woods indicated, the back nine was a completely different story. The first concerning shot came at the fickle par-4 10th, where he pulled a driver well left and had to grind out a par. At the dogleg left 13th, he yanked a drive into the trees left but managed to get up and down from 165 yards for par. There was another scrambling par after a right miss at the par-5 17th, but he couldn’t overcome a push into the trees down the right of 18, leading to a closing bogey.

The good news for Woods is he won’t have to wait long to flush away that uneven back nine. He’s off in his second round at 7:16 a.m. local time, when the wind should be manageable and the poa annua greens as smooth as they’ll be all day.

“Considering I’m still on East Coast time, I kind of like it,” Woods said of the early tee time and way-earlier wake up. “I’ve been getting up pretty early, so it will be a quick turnaround, get back at it. Hopefully we’ll have a little bit smoother greens out there on the golf course. Hopefully I can hit it as good as I did on that front nine to give myself a number of looks for the entire 18 holes, not just nine holes.”