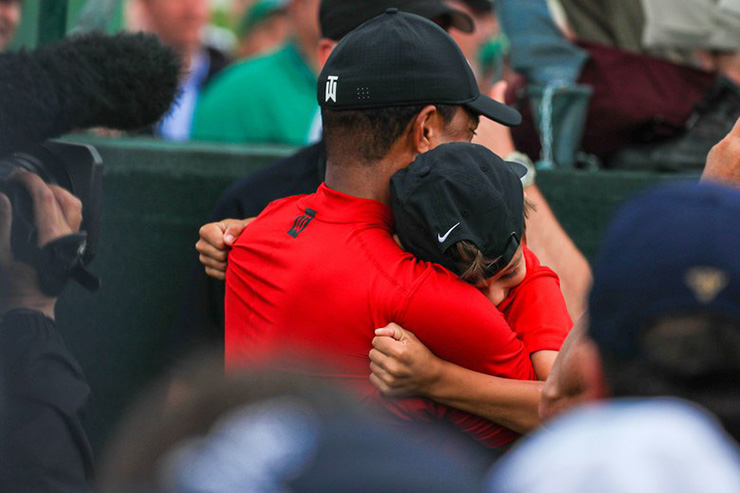 Tiger Woods’ hugs his son Charlie during the final round of the 2019 Masters. (Christian Iooss)

By Dave Shedloski
A tale of two major championships, the first he lost and the second he won, separated by nine months, an ocean and a sea of emotions, Tiger Woods absorbed most poignantly through the faces of his two young children.

In winning the 2019 Masters, Woods secured a long-sought prize that a few years ago must have seemed impossible to realize. Yes, to have won a major championship for the first time in 11 years, and roughly two years after a spinal-fusion-surgery Hail Mary, was truly something. In whatever haughty terms one wants to describe it—epic, historic, miraculous, transcendent—the choice is justified.

However, Woods enjoyed the achievement most by having shared it with his kids, Sam and Charlie. At least that was the sentiment he expressed when talking on Tuesday during a conference call as the run-up to the 2020 Masters begins in earnest.

Sam and Charlie watched Dad come up short in the Open Championship at Carnoustie nearly nine months prior, in July, the first time Tiger had legitimately been in contention in a major since the 2013 Open at Muirfield, when he entered the final round tied for second and drifted back to T-6. He led briefly at Carnoustie on Sunday before stumbling, and ended up T-6 again while playing partner Francesco Molinari took the claret jug. 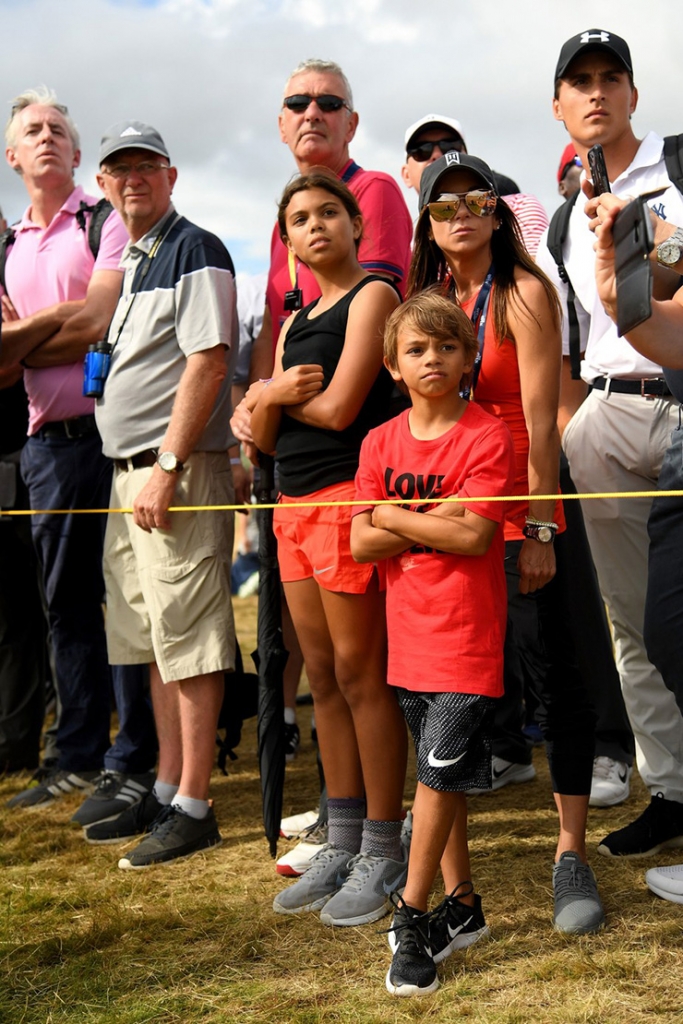 Sam and Charlie Woods watch from behind the ropes during the final round of the 2018 Open Championship at Carnoustie. (Matthew Lewis/R&A)

The last public view of Woods that day in 2018 was of a father, arms around his kids, walking over a temporary bridge behind the 18th green and disappearing into the clubhouse.

Last April at Augusta National Golf Club, behind the 18th green, after tapping in for a one-stroke victory and fifth Masters triumph, there were hugs all around, none sweeter than those from his daughter and son.

“I think what made it so special is that they saw me fail the year before at the British Open. I had gotten the lead there and made bogey, double, and ended up losing to Francesco,” Woods said. “To have them experience what it feels like to be part of a major championship and watch their dad fail and not get it done, and now to be a part of it when I did get it done, I think it’s two memories that they will never forget. And the embraces and the hugs and the excitement, because they know how I felt and what it felt like when I lost at Carnoustie … to have the complete flip with them in less than a year, it was very fresh in their minds.”

It’s a long and rambling thought, and totally justified in the context of all the emotion woven into the two experiences. Some things are just difficult to express cogently, and the struggle with doing so only underscores their impact.

Augusta National arranges the teleconference with its reigning Masters champion each year around this time. It just so happens that this one followed by one day the memorial service for Kobe Bryant and his daughter, Gianna, who along with seven others perished in a helicopter crash on Jan. 26 in Calabasas, Calif. What rings most true in what has been written and said about Bryant in the aftermath of that tragedy—other than his indisputable talent with a basketball—is that he was a devoted father and that nothing was more important to him.

We often wonder how difficult it must be for a child to have a famous parent, in this case a parent who is a great athlete. But do we ever stop to think how difficult it is to be a great parent, or even a decent one, when removed from the task of being a great athlete, when he has to leave his self-absorption and intuitive drive on the doorstep?

Not everyone can be Jack Nicklaus, the template for bringing four-star banality to such a delicate balancing act. Nicklaus always revelled in being a dad first, which brought all the balance he needed. Bryant appears to have figured it out.

Woods has spoken often in the last few years about his children and being a part of their lives, being there for them as his father was for him. That’s what being a father is about, and the Bryant tragedy only brings that into sharper relief, not just in relation to Woods, but for all of us.

The payoff is that rare time when the father gets to have his children there for him and to have them join in the achievement, and to understand and appreciate it. That was the real reward for Woods when he won the Masters.

In the aftermath of his 15th major title, one incident, again involving his children, came to mind for Woods. They were flying back home to Jupiter, Fla., and there was a bit of a tussle over dad’s new wardrobe accessory. You could hear in his voice how much he savoured the proceedings.

“Just watching them fight over the green jacket on the airplane was pretty funny,” Woods said. “ ‘I want to wear it; no, I want to wear it,’ and that’s something I certainly will never forget.”

We didn’t get a chance to ask which child won the tug of war between them. Their father slept clutching his first green jacket the night of his epic 12-stroke victory in 1997. That’s how much it meant to him, and it’s doubtful any other win in his career has come close, except perhaps the 2006 Open Championship, his first major victory after his father died.

Obviously, the revelation of that moment between his kids, wrestling over their father’s prize, indicates how thoroughly Woods is touched by the memory. For a man known to struggle with sleep, he’ll always have that scene for his daydreams.