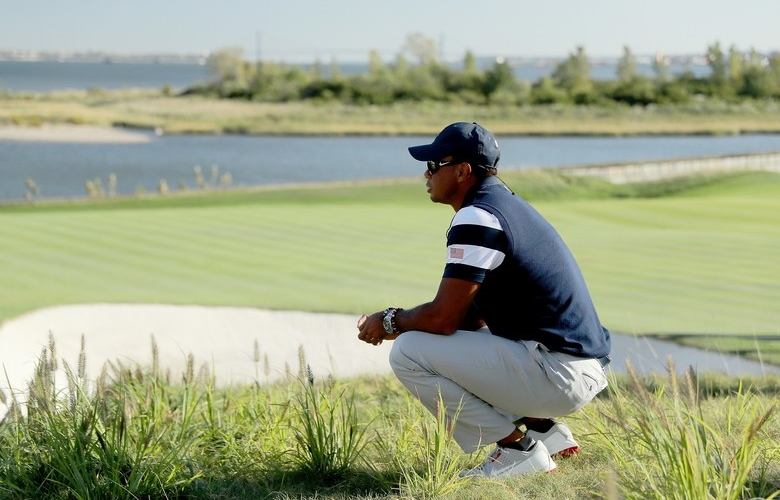 By John Strege
Tiger Mania apparently has more legs than Woods’ 2-iron stingers at Hoylake, rolling on and on, as it does, unimpeded, notwithstanding an occasional hiatus.

So here we are, 21 years after a Sports Illustrated headline dubbed Woods “The Chosen One,” his return to competitive golf in the Hero World Challenge next week in the Bahamas seems to be heralded as a potential second coming. Again.

The media (including us), social and traditional, is complicit in this, of course. Understandably. As P.T. Barnum said, “Without promotion, something terrible happens …nothing.”

Hence, Golf Channel’s Tiger Tracker, who Tweets every hole of every round that Woods plays, used his entire expanded allotment of 280 characters to herald Tiger’s return with this:

P.T. Barnum, incidentally, was not invoked as a metaphor for the circus surrounding Woods’ latest comeback bid, though that works, too. The fact is that even today, 10 months and another back surgery removed from his last competitive round and more than four years since his last victory, no one in golf facilitates media promotion of an event and its marquee star to the degree a Tiger appearance does.

Eighty-seven media members representing 57 outlets — including the New York Times, New York Post, Wall Street Journal and USA Today on the print side and GolfDigest.com and ESPN.com on the web side — from the U.S., the United Kingdom, Japan, the Bahamas and India, will be there for a largely meaningless event that kicks off what in golf is known as the Silly Season.

Both ESPN and Golf Channel are likely to televise Woods’ Tuesday news conference, while Golf Channel has added an hour to its tournament coverage to each of the first two rounds. It also is extending the time allotment for its Morning Drive and Golf Central shows.

Is this hype on steroids?

“It sure seems like that,” the Associated Press’ esteemed golf writer Doug Ferguson wrote in an email. “I blame that more on social media, which by any other name means ‘create hype.’ The PGA Tour might be the biggest offender, which I find odd. They had one the other day about ’10 more days until he returns,’ which struck me as 10 more days of getting easy clicks.

“Another one showed Tiger with 79 PGA Tour victories and the rest of the Hero field with 81. That’s what causes hype. That’s what sets up unreasonable expectations. I felt the subliminal message from PGA Tour posts, mainly Twitter, was that we need someone like him to get people excited because what we have isn’t enough. I think most golf fans would disagree in terms of what Jordan Spieth, Justin Thomas, Dustin Johnson, Brooks Koepka, and that group gives the game.

“Look, golf is always better when Tiger is playing. It’s more fun. It gets more attention. We know that. But dating to 2014, there seems to be this belief that Tiger coming back to golf is the guy who was 26 years old and doing things we’d never seen from anyone else. He’s 42 [next month]. What exactly are they coming to see? I understand the excitement because after this last surgery, I think there was a feeling in some corners that we’d never see him again. And now we do, so that causes anticipation. Everybody, probably Tiger included, wishes everything were like it once was.”

Unreasonable expectations have become a recurring theme with Tiger comebacks. One wag noted that this edition of the Hero World Challenge “sort of feels like Groundhog Day.”

The scenario is nearly identical to the Hero World Challenge from a year ago, when Woods was returning from an even longer hiatus. He finished 15th among the 17 who completed 72 holes, but stoked optimism by completing four rounds at what at the time appeared to be pain-free.

The difference this year is that optimism has been heightened perhaps to some degree by Rickie Fowler’s off-hand confirmation of a rumour that Woods was driving the ball longer than Fowler in their rounds together at the Medalist in South Florida.

Then there were Tiger’s own brief videos that he posted on Twitter, one of them showing him making a full swing with the driver while noting, “Making progress.” His former instructor Hank Haney viewed it and tweeted that it was “a swing he could win with.”

So adding to the abundant hype of Woods’ simply returning to competition were endorsements from two key figures turbo-boosting anticipation by suggesting that this comeback has greater possibilities of success than previous efforts.

And should he be in contention? Well, there’s your fifth major, as the Hero World Challenge jokingly already is being called, and a cause to have a defibrillator on hand for Tiger Tracker, just in case.

It is not inconceivable that Woods would contend on Sunday, given that with only 18 players it’s possible that the entire field could be in contention. At a minimum, it guarantees Woods a top 20. From there, it’s only a pitch shot to the top.

Or not. Bob Williams is the CEO and COO of Burns Entertainment & Sports Marketing and an expert on celebrity appeal, who sounded a note of caution.

RELATED: Will Tiger Woods’ body let him down again?

“I think that Hank Haney and Rickie Fowler are not doing Tiger Woods any favors,” he said. “I think it fuels the fire not only for a comeback, but a comeback that can maybe be similar to the way Tiger used to be.”

Ferguson upped the ante, raising the possibility that this is a crossroads for Woods’ career.

“I think the additional excitement and anticipation is related to the higher risk of the [most recent] surgery and that this one actually worked,” he said. “If anything, seems there should be as much trepidation. Because if this one doesn’t work, what will?”

So in addition to hype, there’s hope. Eliminating health as an impediment to a successful comeback would mean there’s at least a chance. As they say about PowerBall, you can’t win if you don’t play. Others can decide whether Tiger’s odds are better than a lottery.

“I’m a golf fan,” Williams said. “I’m curious. I’m just hoping that when he goes into that deep rough he’s able to hack it out and be injury free, that at Torrey Pines, when it’s 50 degrees and raining that his back will be pain free. There will be no comeback without health.”

So, again, here we are. The face of golf for the better part of two decades is about to return to the stage and the beat palpably goes on, fueled by a complicit media and a compliant audience.