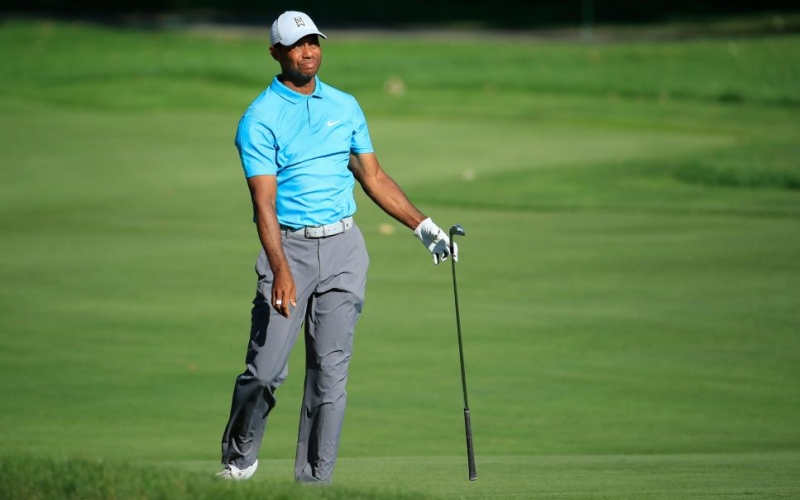 Andy Lyons
Tiger Woods watches his second shot on the seventh hole during the first round of the 2020 BMW Championship.

By Daniel Rapaport
OLYMPIA FIELDS, Ill. — It felt like a U.S. Open on Thursday at Olympia Fields. One week after Dustin Johnson made golf look video-game easy at The Northern Trust, the BMW Championship offered an entirely different test. The greens were slick, the rough juicy, the wind howling. The lowest anyone got was three under, Hideki Matsuyama finishing the day out front with a three-under 67. Players had to work hard if they wanted to shoot anything around par.

Tiger Woods did exactly that for 15 holes, overcoming some sketchy ball-striking with a bunch of crucial par-saving putts. After starting on the back nine, Woods sat even par when he stepped to the seventh hole, not far off the lead. But golf rounds comprise 18 holes, and that fact is never more salient than days like these.

Woods bogeyed his final three holes on Thursday for a three-over 73, a round that left him in squarely in the middle of the pack in the second of three FedEx Cup Playoff events. Middle of the pack simply won’t suffice, however, this week for Woods, who will likely need a top-four finish to qualify for next week’s Tour Championship or see his 2019-’20 PGA Tour season come to an early end.

Despite that poor finish, Woods was only six shots back of the lead at day’s end.

“The course is in perfect shape,” Woods said. This was his first competitive round at Olympia Fields since the 2003 U.S. Open, where he finished in a tie for 20th. “Not the way I wanted to finish, but the golf course is playing difficult for sure.”

Woods played alongside longtime buddy Bubba Watson and 29-year-old Carlos Ortiz, who was paired with Woods for the first time. Woods striped his opening tee shot and flicked a wedge to just inside 10 feet, a perfect opportunity to start the day with a momentum-building birdie.

It wasn’t to be. Woods then bogeyed the next, and the grind was on. The round looked destined to get away from him after he badly pulled a 3-wood into the trees on 14, but a friendly kick gave him a look and he muscled an iron into the center of the green. The 28-footer for birdie caught the lip and fell, and Woods was back to even par.

He stayed there until a three-putt bogey at 16—he had two three-putts on the day—and made the turn in one-over 36. A birdie at 2 had him back to even, and Woods made four straight pars before heading to the difficult stretch between 7 and 9.

It didn’t go well. Woods’ approach on 7 trundled through the green and his bump-and-run stopped woefully short. Bogey. On 8, he made his worst putting stroke of the day. Bogey. On 9, a wipey drive found a fairway bunker and forced a layup. Bogey.

Woods was clearly hot as he walked off the ninth green. Literally hot, as temperatures hovered in the low 90s all day with an uncomfortable dose of humidity. Figuratively, because he had squandered an opportunity to grind out a solid round without his best stuff. He cannot afford to be so wasteful if he wants his season to last past Sunday.