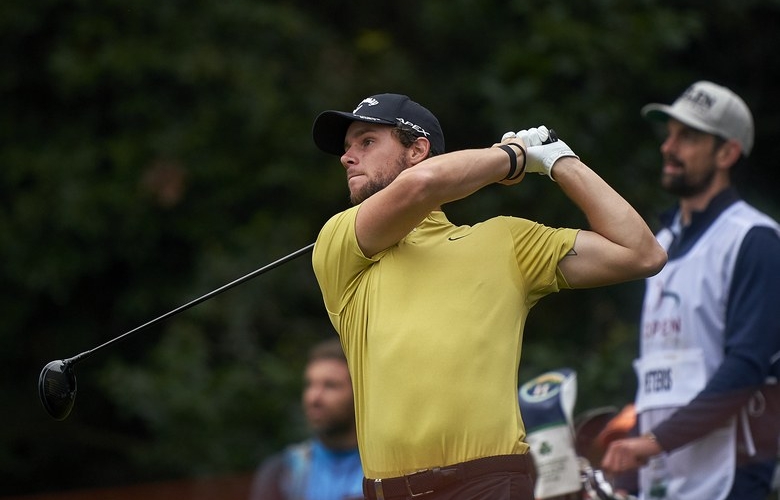 By Brian Wacker
Earlier this year, the European Tour announced a plan to combat the slow play problems that have plagued golf for years. In short, one-shot penalties will be doled out more quickly, along with increased fines, beginning next season.

On Sunday, Thomas Pieters made his own statement.

Pieters was first off as a single in the final round of Italian Open on the European Tour. Granted, that means he wasn’t in contention and had a lot less at stake than players at the top of the leader board, but he still acquitted himself alright. The 27-year-old Belgian shot even-par 71 and did so in 1 hour, 59 minutes—the same score he shot the first two rounds of the tournament.

A nice side benefit? He burned more than 1,300 calories doing so. It’s not as if he was running from one shot to the next, either. According to a fitness app he was using, Pieters’ heart rate was actually lower than normal for a golf “workout.”

In 2016, Kevin Na played the final of the Tour Championship, also as a single, in the same amount of time. He shot the same score, too, with an even-par 70 at East Lake.

“It wasn’t like I was quick-hitting it,” Na said at the time. “I was running in between shots, but when it was my turn to hit, I read every putt from both sides, and I took my time. I was trying to also shoot a good score because it doesn’t matter how fast you play, if you put up like a 78 or an 80, it really doesn’t do any good. And I really wanted to break par.”

A year later, Wesley Bryan was even better, shooting a 69 in the final round of the BMW Championship, where he raced around Conway Farms in a scorching hour and 28 minutes.

The point: Playing slow doesn’t necessarily add up to shooting a lower score.