Thomas Pieters makes news with his game, not his temper, as he hangs on to win the Czech Masters 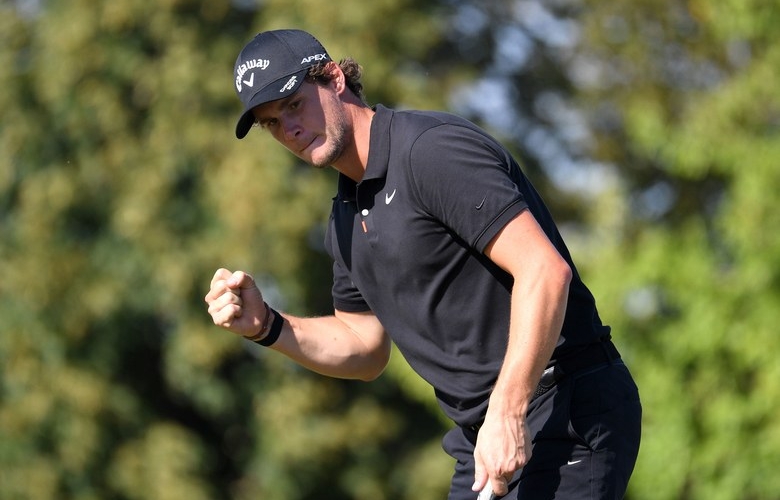 By John Huggan
Three years on from his third European Tour victory, Thomas Pieters finally has a fourth, the D+D Real Czech Masters. With a final-round three-under 69 over the Albatross Resort just outside Prague, the 27-year-old Belgian reached 19-under 269 for the week to finish one shot clear of his playing partner, Adri Arnaus of Sweden. Englishman Sam Horsfield and defending champion Andrea Pavan of Italy tied for third, another two strokes back. No one else was within five shots of the champion.

The eventual closeness of the final margin looked unlikely until an eventful last few holes. Despite driving into an unplayable lie right of the 15th fairway, Pieters made an impressive par when he holed a 15-feet putt and arrived on the 16th tee four shots clear of his nearest challenger. That lead was immediately cut in half by a two-shot swing on the 16th—a birdie by Arnaus and a bogey from Pieters—and stayed that way to the final hole.

Again, Arnaus made things interesting with a 3 on the par-4 18th, his fourth birdie in a closing 69 that also included an eagle. But Pieters, winner of the 2012 NCAA championship during his time at the University of Illinois, was up to the task. Eventually. An awkward little putt for par had to be made for a second victory in an event where he was also runner-up in 2016.

“Parts of it I was relaxed,” Pieters said in reference to his final round. “But I’m proud of how I handled it all, especially 15. I’m still learning, and it has been a while for me. It feels good. I’m really happy I got it done. That was a great last three holes from Adri. He made my two-footer at the end a bit nervy. I was just trying to do my own thing really. The wind was tricky. But I hit it well. And took advantage.”

Indeed, this was a victory more for Pieters’ notoriously volatile temperament than his admirably fluid and powerful full-swing technique. As former European Tour winner Tony Johnstone said on Sky TV: “Too often Thomas’ emotions have destroyed him. But this week he has stayed calm and stayed cheerful. Not once has he looked down-at-heel.”

Which was no mean feat, given how Pieters’ year had been going to this point. Indeed, since playing a starring role in the 2016 Ryder Cup at Hazeltine National—where he picked up four points out of five in a losing European cause—the Antwerp native’s career has gone steadily backwards. Ranked 42nd in the world, down from high of 23rd, when making that startling debut against the Americans, Pieters had descended to 111th upon arrival in the Czech Republic. This season he had recorded only one top-10 finish in 15 European Tour starts, a distant T-6 in February’s Oman Open. Only a victory for Belgium at last year’s World Cup of Golf in Melbourne alongside compatriot Thomas Detry could be called a recent positive.

Until now that is.