By Christopher Powers
Thomas Pieters has been known to run a little hot on the golf course, often taking his anger out on his clubs. Depending on how you view it, that could make him an incredibly compelling or incredibly dangerous candidate for the European Tour’s “Chase The Ace” challenge, which has brought world-class players to their knees in the past.

For those unaware, the “Chase The Ace” challenge is a recurring video series from the Euro Tour in which they give a tour pro 500 attempts to make a hole-in-one on a shortish par 3. Three players have tried the challenge so far, and only one, England’s Andy Sullivan, was able to make an ace (on his 230th try). The other two, Edoardo Molinari and Brandon Stone, failed to put one in the hole while slowly going insane in the process.

Pieters became the latest victim in what is easily the most depressing video of the four instalments. Seriously, this was hard to watch:

We gave @Thomas_Pieters 500 balls to see if he could make a hole-in-one.

I realize how silly it sounds to say that I feel “sad” for a pro who can consistently hit the ball that close to the hole over and over, but man was that sad, mostly because he wanted to make one so badly. As the beginning of the video shows, Pieters has obviously made it a point to work on controlling his temper, which he apparently did a great job of during his victory at the Czech Masters this past August. But even the calmest of humans is bound to crack if you give him 500 tries to do something and he can’t do it.

Pieters might not have done what he went there to do, but nobody can say he wasn’t entertaining: This was so good. “Everybody expects me to get mad. … not gonna happen.” A few moments later … All right, not that bad. Emotions are mostly in check. This is easy! 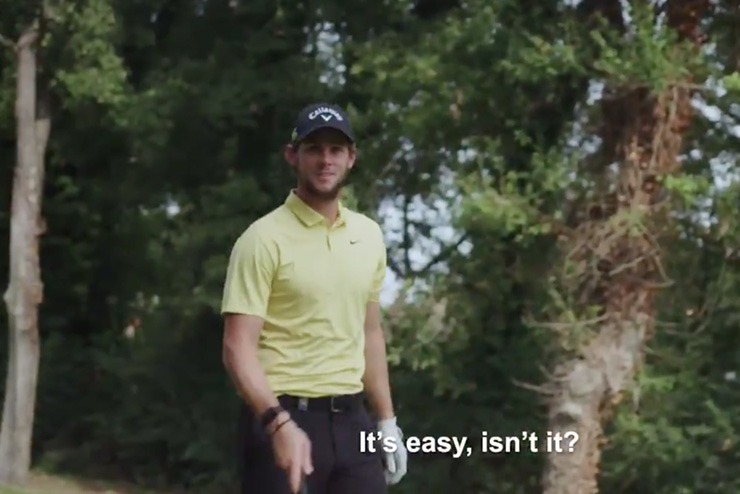 “Just stay calm. It’s just golf,” he said after the club throw, following that up with a “F&%$” after his next shot. Oh, yeah, that’s the good stuff.

Look, he’s trying his best to keep it together, which should be commended. For those of us who sometimes have temper tantrums on the course (guilty), it’s hard to just flip on a dime and become calm, cool, collected guy. Pieters might get there, but not without a few bumps along the way. Frankly, we hope he still lets a little rage out every now and then, because the club-snap videos are tremendous content.