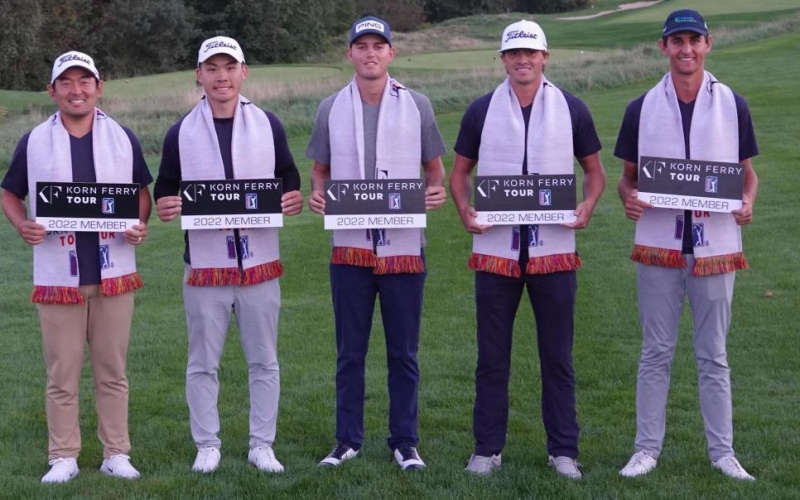 The players who earned their 2022 Korn Ferry Tour cards pose after the Forme Tour Championship.

By Tod Leonard
It is a pop-up professional golf tour with an odd name. It would be understandable if even the most ardent golf fan hasn’t caught on to what it actually is. But know this: It’s one more tour that is changing peoples’ lives.

The Forme Tour—sponsored by an athletic clothing company—only came into existence in 2021 because of the COVID-19 pandemic. American pros needed a place to play when they couldn’t cross the border to compete on the PGA Tour’s Canadian circuit. The big tour formed the Forme, scheduling eight events from late June to mid-September. (A separate tour in Canada was created, also with eight events, that concludes in early October.)

There were sizable carrots being dangled in the U.S. tournaments, beyond purses each week of $115,000. The top-five finishers in the abbreviated season would earn their cards for the 2022 Korn Ferry Tour campaign and have a defined path to possibly reach the PGA Tour.

The battle produced some interesting storylines whose final chapters were written over the past week in the Forme Tour Championship in Dallas, Pa. The weather was a part fo the script, too. After the tournament was forced to move from New Jersey to Pennsylvania because of the damage done by Hurricane Ida, it also ended up being shortened to 54 holes. With Huntsville Country Club unavailable on Saturday, organizers had hoped to get in 36 holes on Friday, but rain prevented them from doing that, and the championship was called after three rounds.

The winner of the Tour Championship was 31-year-old Brad Miller, a former University of Richmond golfer whose victory, at 17 under, was bittersweet. He ended up sixth on the points list and missed getting his KFT card by one position. At No. 6, he was among the 11th- through 25th-ranked players who automatically advance to the second stage of KFT Q-school.

“This is my biggest win so far,” Miller said. “I’m a little older. It’s taken me through more of a process. Everybody is coming out of college, and with the way it’s set up now with PGA Tour U., that they start here, a lot of them are going to do well on the next level and eventually make their way to the Tour—and that includes myself.

Trevor Werbylo, who came to the Forme straight out of college at the University of Arizona, finished atop the season points list on the strength of winning the Fuzzy Zoeller Classic in August. He’d made a splash in his inaugural event, the L&J Golf Championship, losing in a playoff, and after scoring a double eagle in that tournament, he made an ace the next week.

The No. 2 and 3 finishers on the points list started the Forme season with no status. UCLA alum Corey Shaun Monday qualified for one event, got a sponsor’s exemption into another and eventually captured the title in the Forme Open at TPC River Bend. Clemson alum Turk Pettit played on a sponsor’s exemption in his hometown of Auburn, Ala., tied for second and later won the Birck Boilermaker Classic.

The final two players who earned KFT cards were Stanford alum Andrew Yun, who won the Rolling Green Championship and will have full-time status on the KFT for the first time since 2017, and Mac Meissner, an SMU alum and PGA Tour University product who won the Bolingbrook Golf Club Invitational and tied for seventh in the Tour Championship.