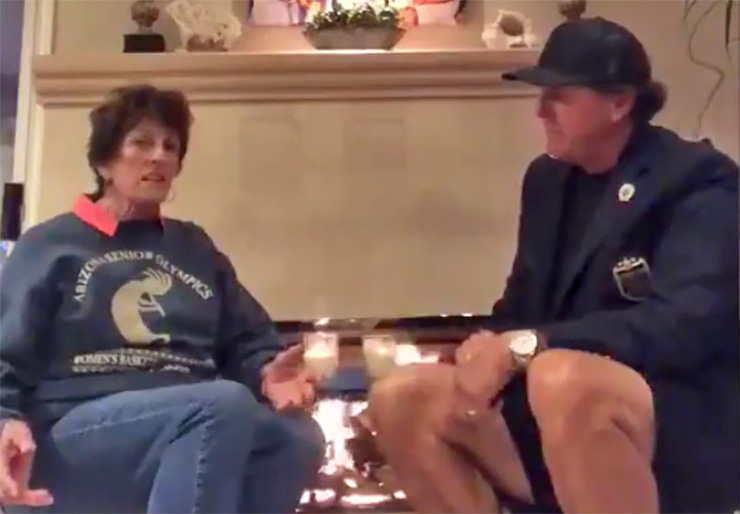 By Alex Myers
Even as Phil Mickelson opened up a big lead on the back nine at Kiawah on Sunday, golf fans held their collective breath. After all, this is a guy who has authored more heartbreaking finishes than anyone not named Greg Norman in golf history. All across the world, people were saying, “Don’t do anything stupid.”

Turns out, Mickelson’s mom was thinking the same thing.

Shortly after Mickelson closed out a sixth career major—becoming the oldest man to win one of golf’s four biggest events in the process—his sister shared a priceless text exchange with their mom. Mary wanted Tina to tell “Philip” to play it safe down the stretch because she knew he wouldn’t listen to his mom.

And Tina said she’d text her brother, Tim, who is Phil’s caddie, because, “he’s the only one Phil is listening to today.” Classic.

While you guys were busy on the golf course, I was busy fielding Mom’s “nervous texts”.😂 @PhilMickelson @goodwalkspoiled pic.twitter.com/ZyZZ5xvdRN

Just another example of why moms are the best—and know best.

RELATED: This tweet Phil sent 12 days ago is downright eerie

It’s unclear whether Tina actually texted Phil and he didn’t exactly par his way home, but he avoided any disasters in holding off Brooks Koepka and Louis Oosthuizen. In other words, he didn’t do anything stupid. Phew.

This is not the first time we’ve heard from Mary, however. Two years ago, she appeared in one of Phil’s “Phireside Chats” on Twitter to tell a fantastic story of how a young Phil—sorry, Philip—snuck away on Thanksgiving to play golf. She also covered her eyes in embarrassment as Phil showed off his calves at the end of the video:

A special 2 candle, real fire edition of Phireside with Phil with my first ever guest, my mom Mary. #PhiresidewithPhil pic.twitter.com/5vZKbqrZeU

RELATED: Rory McIlroy delivered quite the (unintentional) dagger at Phil