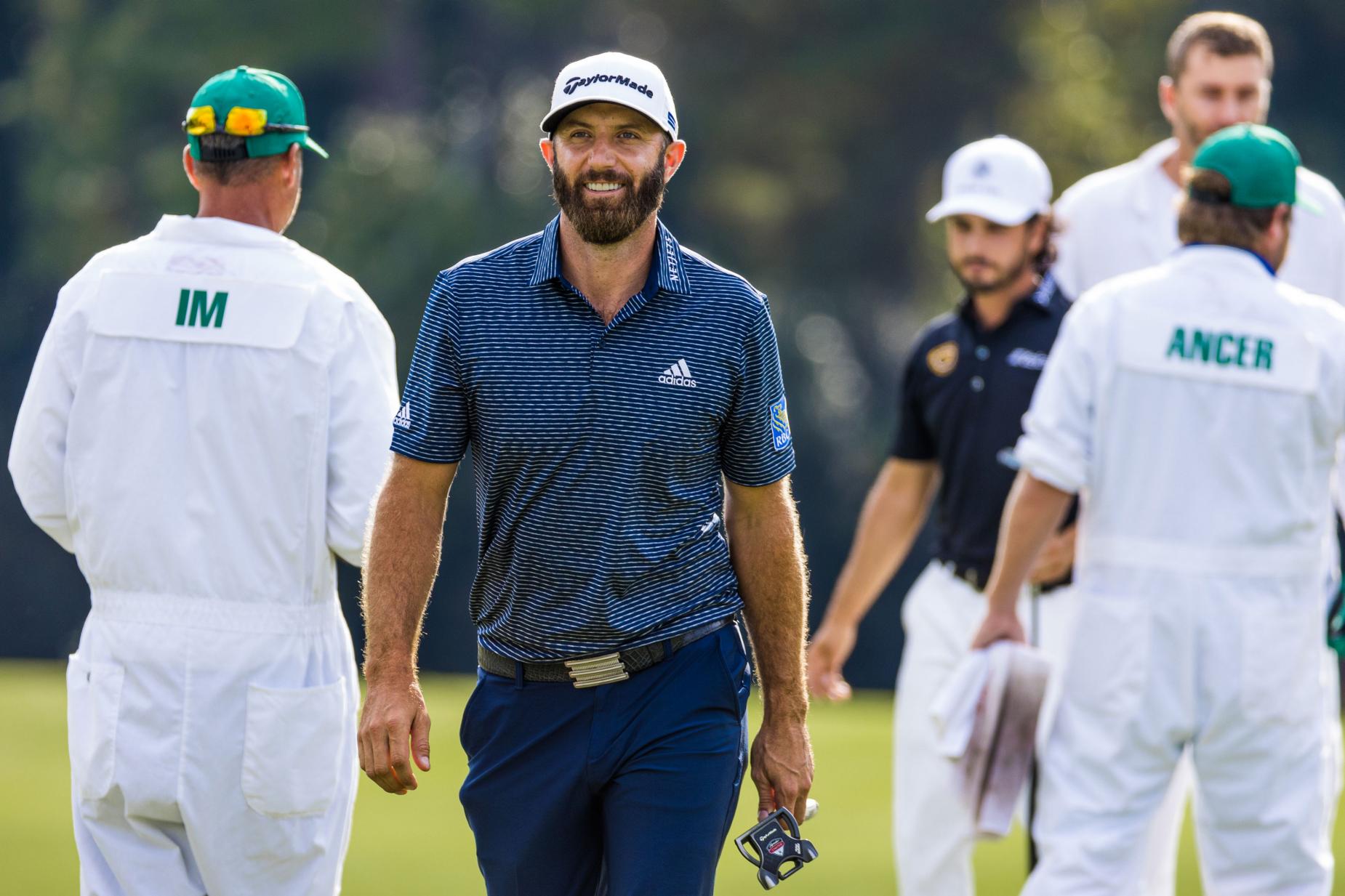 By Dave Shedloski
The shot might have been one of the most forgettable Dustin Johnson struck in the final round of the 2020 Masters on his way to his record-setting five-stroke victory. And yet, just a few weeks ago during a casual round at Augusta National Golf Club with chairman Fred Ridley, Dustin’s brother, Austin, was regaling the chairman with the details of a simple 6-iron layup on the par-5 13th hole.

Ridley, a former U.S. Amateur winner who knows the game as well as anyone, could only shake his head in wonder.

“He loved that story,” said Austin, who was on the bag for his brother last fall during that very unusual Masters—the one absent patrons and roars but which Dustin filled up with satisfaction and emotional recompense.

This particular shot on a partly cloudy Sunday in mid-November would not have provoked roars had spectators been in attendance. Perhaps a few head scratches, but certainly not roars.

After teeing off with his 3-wood on the sharp, sloping dogleg left hole, Johnson casually flushed a chopped-off 6-iron from a sidehill lie in the middle of the fairway that was purposely conservative, never rising above waist high. “Just a little running 6-iron for the layup, just to keep it on the ground,” was how Dustin described the shot in his winner’s press conference.

The choice of shot served two purposes. First, it kept him out of trouble and potentially a grave mistake. “We had a perfect yardage, maybe 240, a perfect 4-iron, but there was mud on the left side of the ball,” Austin said. “That means it’s going to go right, so if we go for the green, we put the water [Rae’s Creek] in play.”

Second, the play at the tail end of Amen Corner made his third shot easier. “There, I cleaned it for you,” Dustin said to his brother as he handed him the club while walking up the fairway.

He wanted it on the ground quickly so the wet turf would clean the ball. Which meant Johnson would have better control of his next stroke, a lob wedge he smoothed to 15 feet, followed by a low, half fist pump when his putt found the heart of the cup for a birdie.

“It was genius,” Austin said. “It was one of the coolest things he’s ever done.”

Few players have exhibited more cool than Dustin Johnson, but his casual demeanour and languid gate hide a fierce competitiveness. Meanwhile, his much-celebrated physical gifts overshadow another aspect of his prowess, something rarely discussed—his golf acumen.

“Dustin’s golf IQ, some of the things he does on the golf course, some of the things he sees, people don’t understand just how well he thinks around a golf course. I’ve known for a long time,” said his manager, David Winkle, who was an outstanding junior player in Texas. “I’ve played golf nearly all of my life, and I’d never heard of that or thought of that. In that moment, under that kind of pressure, to have the clarity of mind to think that way, it’s pretty telling.”

Johnson said Tuesday during a conference call with the media that he was “super focused all week” during the 84th Masters, and the results were quite telling.

They were also emphatic. 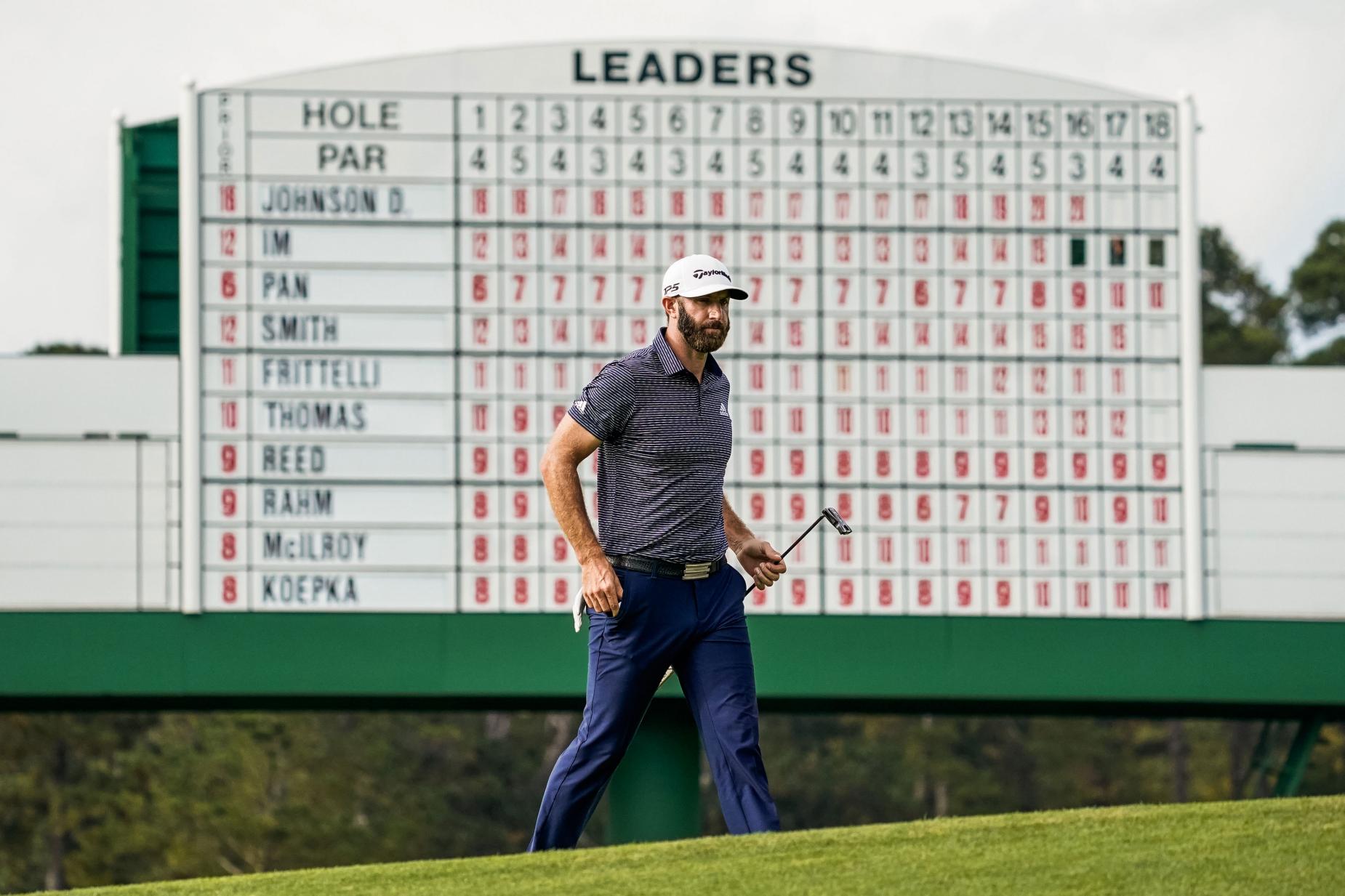 JD Cuban
As Johnson cruised to victory in November, he managed to break several Masters scoring records including the low 72-hole score.

With a closing four-under 68, Johnson set the tournament record with a 20-under 268 total, breaking the previous mark shared by Tiger Woods and Jordan Spieth. “I knew exactly what I was going to do and was able to execute,” he said.

Johnson returned to Augusta National two weeks ago for his first visit since he won the green jacket, the most coveted piece of clothing in golf, even for a guy who has a penchant for filling his closet with high-priced suits. The South Carolina native had grown up an hour from Augusta, and anyone could see how much the victory, his second major to go with his 2016 U.S. Open, meant to the player who is No. 1 in the world but too often had been an also-ran in the biggest events. He just couldn’t hold his emotions in check.

More emotion, mostly pure joy, washed over him during his two-day stay at Augusta National. He and Austin, and their father, Scott, stayed overnight in one of the cabins. Dustin got the chance to wear his green jacket. He found out that he will share a locker with 1979 winner Fuzzy Zoeller in the Champions Locker Room.

“That was pretty cool, first time back,” he said, “going into the Champions Locker Room and stuff. That was a really neat experience. First time I spent the night on the grounds, so that was another, like, cool first-time experience, and had dinner in my green jacket. That was a lot of fun.”

Also fun was the first of two rounds, when some memories from November came flooding back. “I’m pretty sure when I was playing on most of the holes, you know, I was definitely thinking about the shot that I hit on that Sunday when I played.”

That Sunday, Johnson, 36, remembers something else quite vivid and visceral. His nerves. They were churning like never before.

“I was definitely nervous starting the day because obviously it meant so much to me,” he said. “I was feeling it from kind of the time when I woke up. I couldn’t hardly even … couldn’t eat any breakfast, really. Took a couple bites. But it was hard to get down for some reason, which I’ve never had that problem before. And then on the course, too, I remember walking down trying to eat a little bit of an almond butter and jelly sandwich and took one bite and had to wash it down with water, and that was the only way I could get it down.” 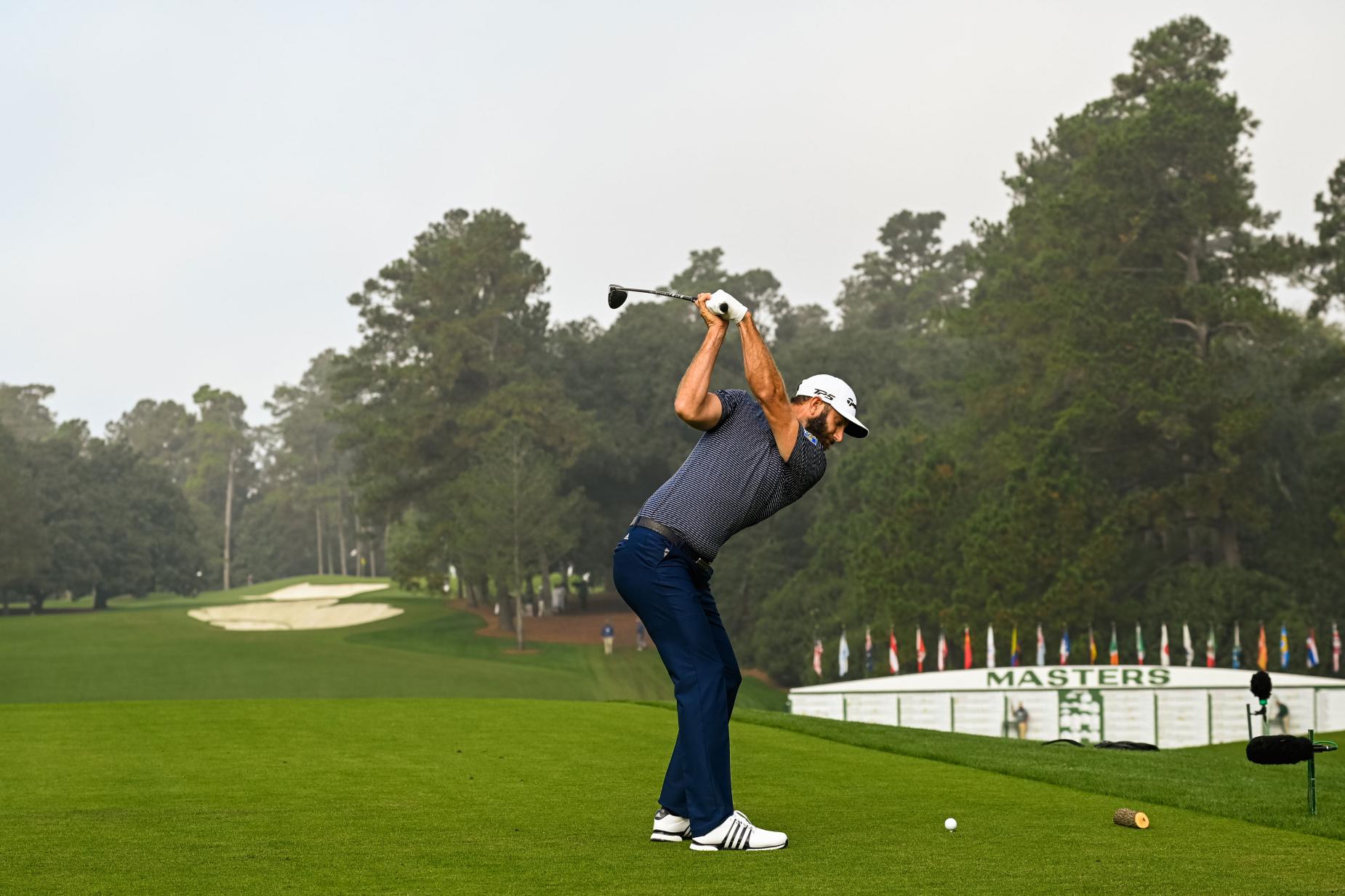 JD Cuban
Johnson acknowledged that nerves were a factor when he teed off in the final round last November.

And although his lead dwindled to a single stroke at one juncture, his nerves did not get the best of him, even with his history of disappointments in the majors, including in August when he held the 54-hole lead in the PGA Championship at TPC Harding Park in San Francisco but finished second to surging Collin Morikawa.

Johnson pulled away from the pack with three straight birdies starting at, yes, the 13th, where he played a shot his brother couldn’t wait to describe to the Masters chairman.

“Obviously, golf is very mental,” Johnson said. “I think a lot of it is in your head, so with golf and when I’m playing well, yeah, you’re thinking very clearly and you’re making good decisions. But golf is a funny game. So I don’t know how to explain the mental part of it.

“I know my mental game’s pretty strong, but I guess it’s all natural ability. And then I’ve learned a lot of it, too, just through college, playing experiences, whatever it might be, books. Kind of just taking everything I’ve learned along the way, and I tried to make it into my own.”

With a green jacket in his closet, he definitely has come into his own. “It definitely reassures me and [tells me] to myself that I am a very good player, and that, I can win these big golf tournaments,” he said.

“Rory [McIlroy] made a comment that Dustin might be the smartest guy out there,” Winkle said. “And Bryson DeChambeau said he thinks [Dustin] is the smartest guy on tour—and we know how Bryson approaches the game, the thought he puts into it. It’s funny how the dialogue has shifted on Dustin and people are taking noted of it, how smart he is. He’s a complete player.”

And authentic. While McIlroy and Justin Thomas have expressed an appreciation for Johnson’s mental strength—his ability to shake off bad luck, bad bounces and focus on the next shot, the next challenge—Johnson couldn’t think of a single person from whom he has taken his cues. But, then, it’s almost counterintuitive to think about how to think. It has to come from within. In the end, you have to be yourself because you can’t rely on anyone else anyway.

“No, not really that I’ve thought about,” he said when asked who might have influenced his approach. “I feel like what I’m doing has been working pretty well, so I’m going to stick with it until it’s not. I don’t know, didn’t really answer your question very well.”

It’s OK. Last November, he answered all the important questions ever asked of him.