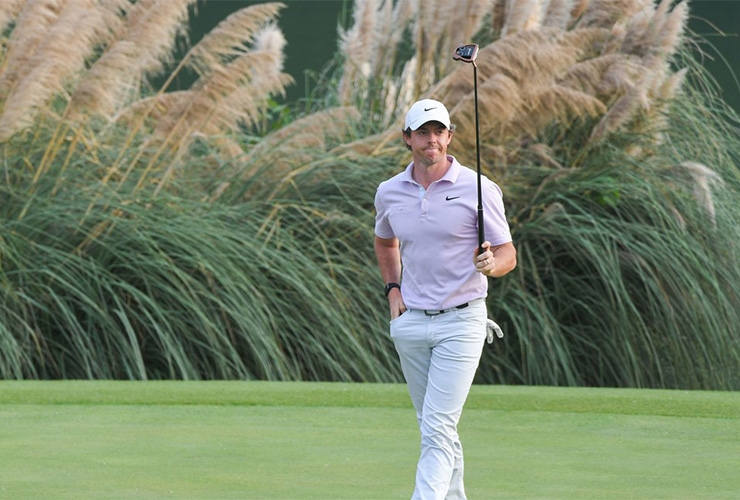 Rory McIlroy joked earlier in the week he was “never” going to be catching Tiger Woods and Sam Snead on the PGA Tour’s all-time victory list. What he didn’t say, though, was that he intended to stop winning any time soon.

For the third straight day in Shanghai, the 30-year-old Northern Irishman shot a five-under 67, with his Saturday score moving him to the top of the leader board at the WGC-HSBC Champions, one stroke ahead of Louis Oosthuizen.

“I probably played the best today that I’ve played all week,” said McIlroy of his bogey-free round at Sheshan International. “I drove the ball well. Hitting my irons pretty good for the most part. I feel like I didn’t quite get as much out of the round as I could have but I’m not going to complain. I’m in the lead going into tomorrow, so yeah, just need to rest up and try to get out there and play another good, solid round of golf.”

The reigning PGA Tour player of the year and FedEx Cup champion is eyeing his 18th career tour title and his fourth in the 2019 calendar year. As impressive as that sounds, McIlroy’s record could be even better. The most recent time he played with a solo 54-hole lead was the WGC-FedEx St. Jude Invitational, only to be passed by Brooks Koepka.

McIlroy will have to be wary of those behind him again this time. Oosthuizen sits one back after rounds of 68-69-65. Tied for third two are defending champion Xander Schauffele (Saturday 68) and second-round leader Matt Fitzpatrick (70).

McIlroy says the intent is take the mindset he had at the RBC Canadian Open, where he closed strong with a Sunday 61 to march to a seven-stroke win.

“I want to go out there and be committed, play aggressively, and shoot a good number,” said McIlroy, who has had 15 top-10 finishes in PGA Tour events in 2019. “I took a lot from the win in Canada earlier this year. I went out tied for the lead, and I just said from the start, ‘I’m going to keep my foot down and I’m going to go for everything.’ It was a good lesson that when you do have something right there, in front of you, a tournament to win or something to achieve, you just have to grab it with both hands, and that’s what I’ll do tomorrow.”

McIlroy’s overall numbers remain solid, having converted seven of 12 career 54-hole leads on tour, and six out of 10 when he’s had the lead alone. He’s also had an impressive career record at the WGC-HSBC with five top-10s in seven starts.