The Open 2019: The most low-profile high-profile swing coach in golf 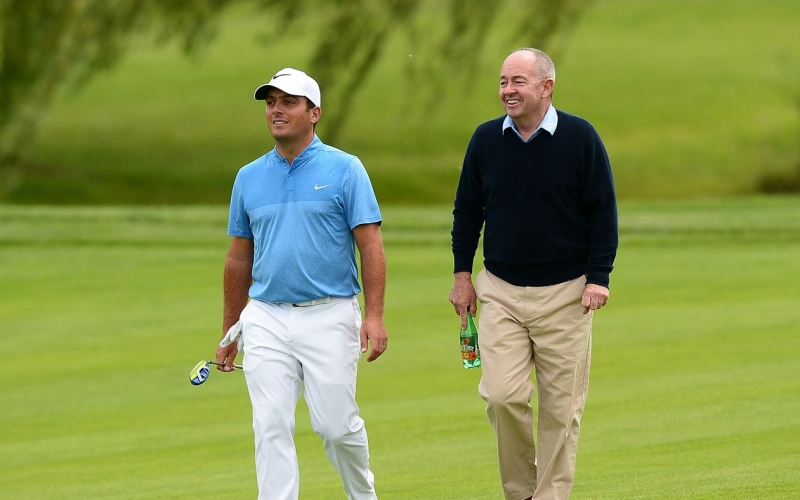 Personal tragedy and an inherent humbleness have kept Denis Pugh from becoming a ‘big-time’ instructor. But it’s a life he’s come to enjoy

By John Huggan
Look closely and you’ll spot him. Not front and centre. But Denis Pugh will be there on the range at Royal Portrush next week, most likely standing quietly nearby as the defending Open champion, Francesco Molinari, hits shots. Pugh might step forward now and then and offer a few quiet words to the man he calls “my best work.” But there will be no preening or posturing for any watching cameras. It will be all business—quiet and efficient.

That has forever been the way of things for Pugh, who is perhaps the most low-profile high-profile swing coach in the world of golf today. Which is odd. A glance at Pugh’s history reveals a host of well-known names and, even more significantly, a wide variety of swings and personalities that have graced the international game over the past three decades or so. As well as Molinari, Pugh has at various times guided the likes of Frank Nobilo, Colin Montgomerie, Ross Fisher, Peter O’Malley, Greg Turner, Wayne Riley, Mike Harwood and Peter Fowler to success around the globe.

Surprisingly, as far as Pugh’s coaching is concerned, O’Malley’s is the name that is perhaps the most significant on that list. Over the course of a more than 30-year professional career, the Australian is most famous for three things: playing the last five holes on the Kings Course at Gleneagles in seven under par to win the 1992 Scottish Open; defeating Tiger Woods in the first round at the 2002 World Match Play Championship; and ball-striking that is legendary for its quality and consistency.

“No one in the history of golf has missed more 10-foot birdie putts than Pom [O’Malley’s nickname on tour],” his friend and compatriot Mike Clayton once said, simultaneously paying tribute to O’Malley’s tee-to-green play and revealing the fatal flaw in his game.

More glibly, Molinari has been labelled “Pom with a putter.” The pair share strikingly similar stocky builds and a propensity for full-swing consistency. So did O’Malley help prepare Pugh for the work he has done with the first Italian to win a major championship?

Yes and no. Times have changed, as, by necessity, has Pugh’s teaching, something that leaves the 64-year-old native of Essex, England, more than a little ambivalent.

“Pro golfers who don’t hit the ball 300 yards or so through the air are not competitive today,” he says. “Part of Francesco’s pre-round warm-up is to blast three balls as hard as he can. Is that good for his game? Yes, for the game as it is now. But it isn’t the game I grew up with.

“It was different before. No one has ever hit the centre of the clubface more often than Pom. Or found the middle of more fairways. If Pom was playing the regular tour now, he would have gone for power more than accuracy. He would have had to do that to survive. And that’s the difference. Francesco was prepared to risk all in the search for more power. Because that’s all that counts these days.” 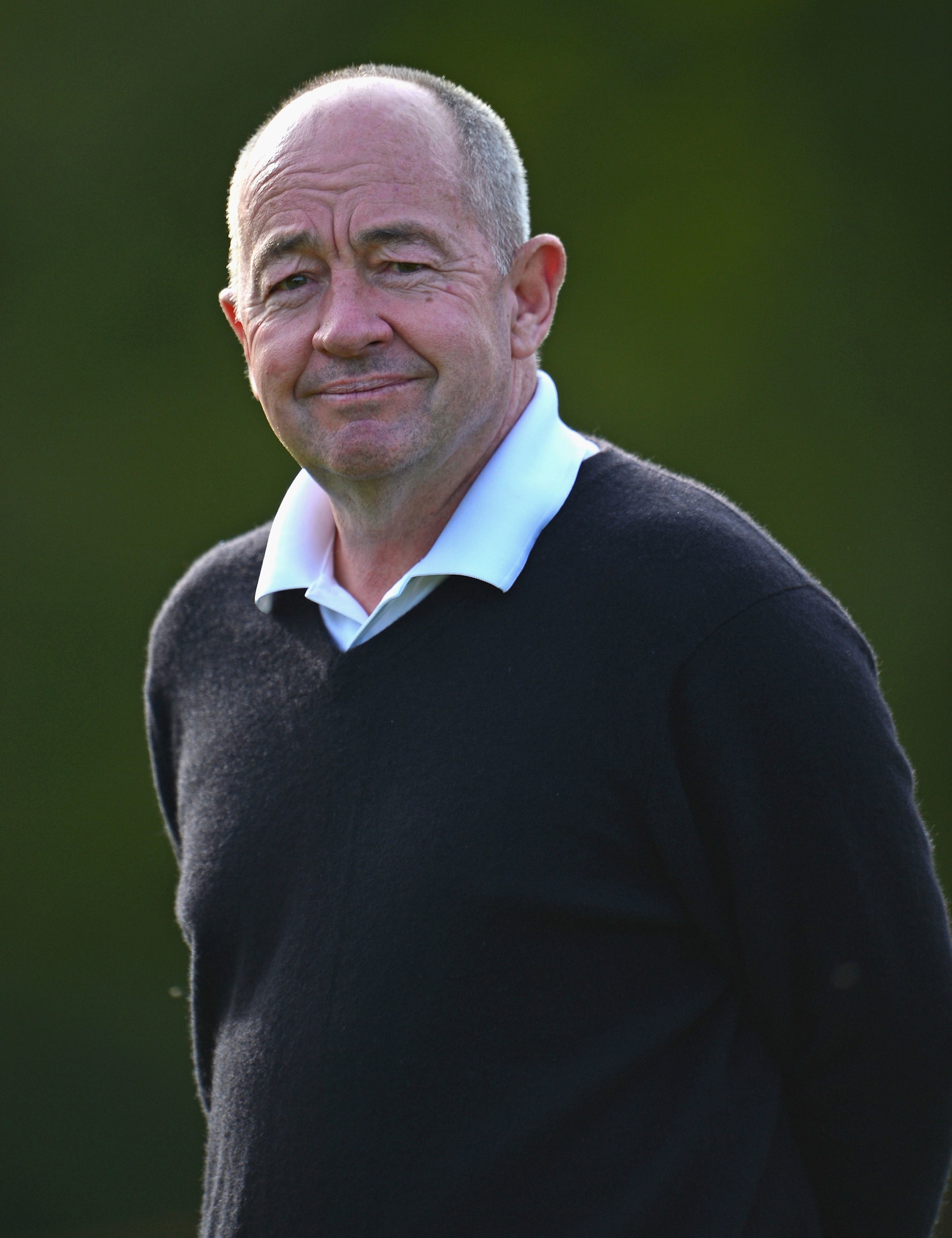 As a player, Pugh never reached such heights—or lengths. His career highlight was winning a mini-tour event in the United States against “a good field.” A self-confessed short-hitting, wild driver who hit too many iron shots fat, he was tour standard with a wedge in his hands and occasionally had enough gumption to hole the odd putt.

“When Faldo won the Open in 1987, David became the star name in coaching terms, and that helped me because I was best placed to explain what David was all about,” Pugh says. “I was one of the few people in the U.K. who knew how to analyze a swing on video. Anyway, David was hot and I was associated with him. And I knew how to work a video camera. On those things, I built a career.”

RELATED: How Royal Portrush got a second chance at hosting an Open Championship

In time, more and more tour players took themselves to see Pugh, many of them from Down Under. One, Turner, was rescued from the edge of the abyss, his game an 18-handicap mix of tops and shanks before Pugh entered his life. Nobilo, now a mainstay of Golf Channel’s coverage, was another.

“I went to Denis as part of a search for improvement,” says the New Zealander. “I was questioning what causes what. And he was also a little anti-establishment, which suited me. We were contrarians together. And Denis was as hungry to make a name for himself as I was. He is the best coach I ever worked with. The things that changed my game the most and made me competitive, I did under his tutelage. I was with him from 1988-’89 to 1996. I played my best golf under him. My swing was technically sound. And a lot of people liked it. He made me believe in myself. He preached three things: posture, positioning and plane. That described my swing perfectly. It worked well under pressure, and I could fix it when it went wrong.”

All of which is in complete contrast to Pugh’s most famous student, pre-Molinari. Montgomerie might be the last person in the world anyone would go to for an in-depth explanation of how the golf swing works. On the range at the K Club in Ireland, a journalist once had to explain to the eight-time European No. 1 why it was easier to fade the ball with a 3-iron rather than a 9-iron.

“Really? I never knew that.”

For Pugh, teaching such ignorance was a new and very different challenge. This was no swing re-build for Turner, or a long-term fine-tuning with Nobilo. This was a unique experience with a unique golfer, but one that proved to be mutually beneficial.

“Monty made me better at what I do,” Pugh says. “Learning to coach in chaos was interesting. He taught me to be adaptable. Day to day, I never knew which Monty was going to appear. Or in what circumstances I would be teaching him. He fired me 19 times over 12 years. He re-hired me 19 times, too. He made me more multi-dimensional. There is one way for every player, but no one way for every player.

“Working with Monty was always interesting, but over time he basically cost me the rest of my ‘stable,’ with one or two exceptions,” Pugh says. “The other players didn’t like that Monty was sucking up their time with me. He expected full-time attention.” 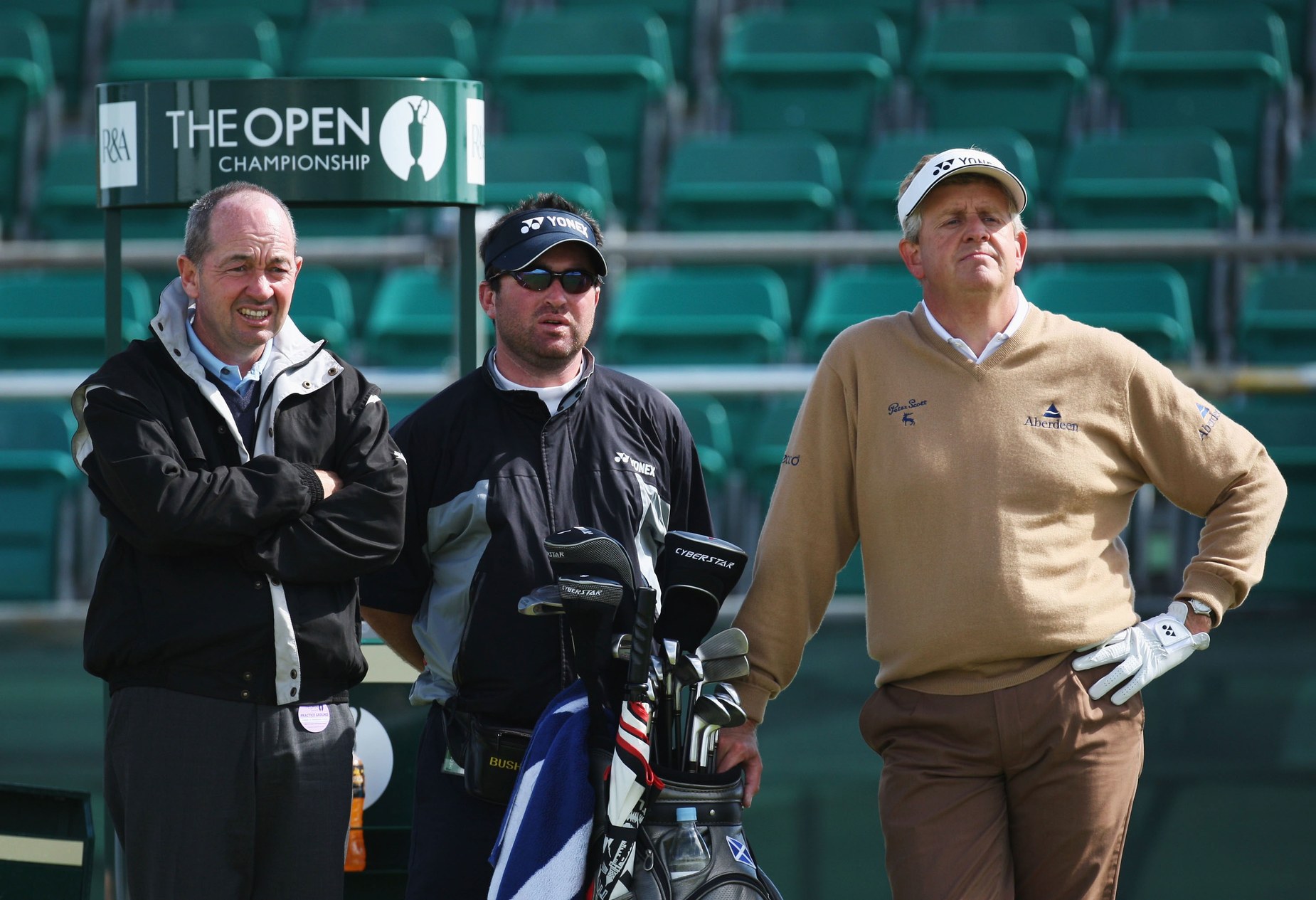 Ross Kinnaird/Getty Images
Pugh’s work with an intense student like Montgomerie helped him become a better instructor even if it cost him clients.

That was to prove even more impossible for Pugh, whose life changed forever on Saturday, Sept. 18, 1999. Arriving back from picking up pizzas for the family lunch—son Robert was 12, daughter Victoria, 10—Pugh saw an ambulance in his driveway. Pugh’s wife, Lesley, had suffered a massive heart attack during his brief absence. Two days later, after being told there was no sign of brain activity, Pugh made the agonizing decision to turn off her life-support machine. She was 43.

“It took me about 18 months to get to the stage where I could talk about it without crying,” says Pugh, who married again in 2003, and commutes between London and Munich to be with Nettie, a Supreme Court judge in Germany. “Even now at certain times, I get tearful if I think about it. I can still get upset. But I don’t like to look backward. I prefer to live in the present and look forward to the future. I was always a bit that way, but now I’m totally that way. I’m not comforted by my memories; I just feel an enormous sadness, thinking about what could have been.”

After Lesley’s passing, Pugh stopped travelling on tour, gave up his occasional appearances on Sky Sports television coverage and took a club professional job at The Wisley Club near London. Apart from the occasional visit from Monty or Pom, that was his working life, the rest devoted to bringing up his two children.

“I look back now and know how much my mum’s death affected his life,” Robert says. “It was obviously a devastating blow for all of us, but a huge thing for my dad. As a kid, I didn’t see that as much as I do now. Before that, I had never had a cooked meal from my dad. But that became an everyday thing. He learned how to cook. He did all the washing and the ironing. He became both parents, even as he had a career, too. I’m amazed by how much he did, really.

“He was always there when my sister and I needed him,” Robert says. “We were always his first priority. I will always be grateful for all that he did for us. He’s been a great dad. And he still loves golf, even if he claims he doesn’t. He’s always talking about it. He’s always trying to get better. And he spends too much time on Twitter.”

Indeed, the elder Pugh—who refuses to give swing tips on social media—is a prolific Tweeter, his vehemently pro-remain views on the U.K.’s imminent exit from the European Community (Brexit) taking up much character space amid the golf stuff.

“Cliched thinking is everywhere,” he says with a smile and a shake of the head. “And when it comes to both politics and golf, many people don’t want to know because they already think they know. It’s better to think the lie than be told the truth.” 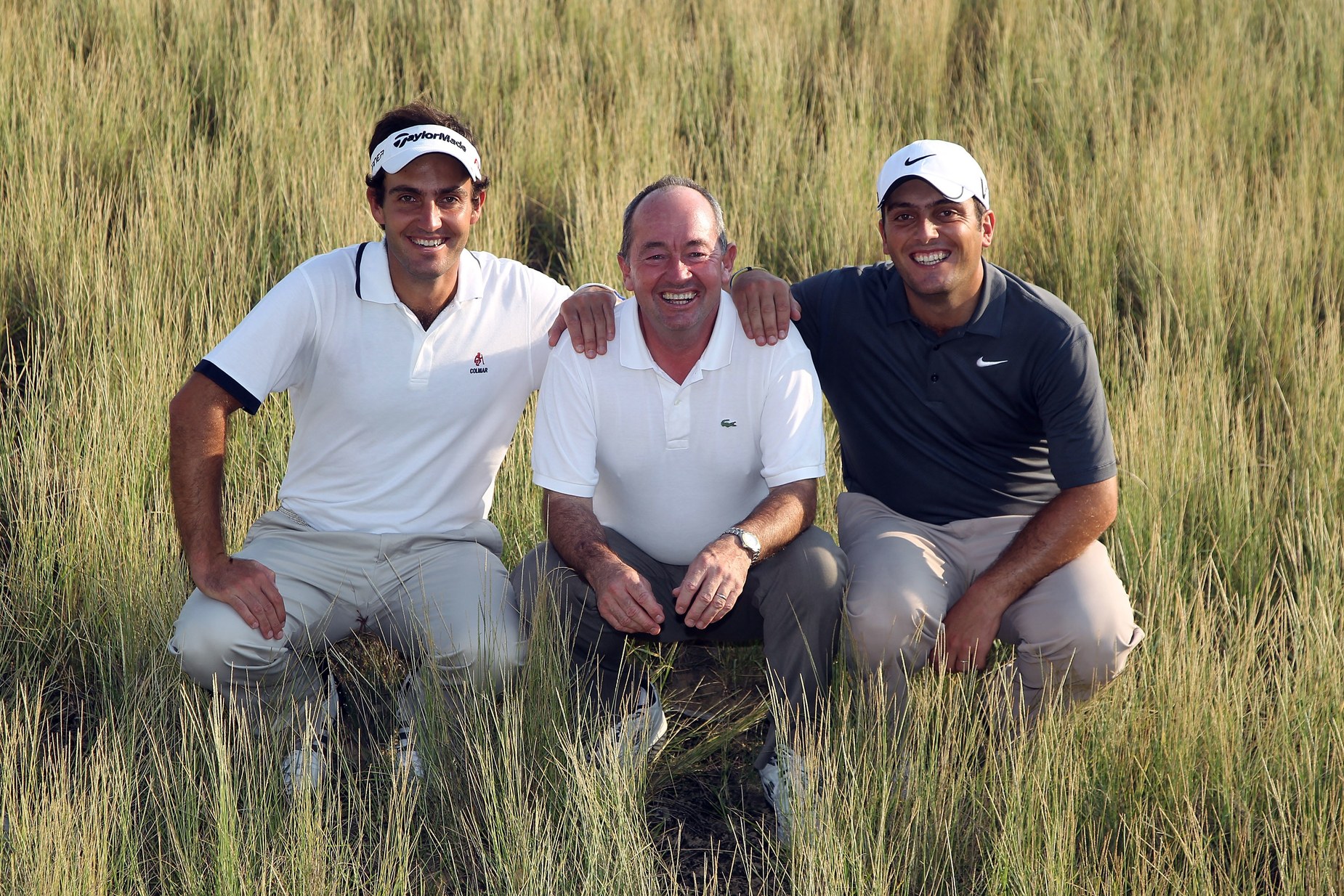 And so to Molinari, who has worked with Pugh since he—along with older brother Edoardo—was part of the Italian amateur team coached by the Englishman. It has been an unusually long and uninterrupted relationship in a world where the inclination of the player is so often to look elsewhere when things are perhaps not going exactly to plan.

“I am obviously biased,” Francesco says, “but I think Denis has great knowledge. He has a great way of working—not too intense or invasive. For me, he always had a long-term picture in his head. Little by little, he has made me better. In the beginning, I didn’t realize what he was doing. But I matured enough to see where we were going. Our secret is that his message has never gotten old. Denis is always researching and updating his ideas. So the message has changed and evolved.

“Denis is a lot more driven and ambitious than people realise, just because he is generally happy and smiling,” Molinari says. “But he is similar to me—and this is why we get on so well—in that we both have a huge drive to get better. Without shouting about it. When it is time, we work very hard.”

One of those times will be this week. On that range at Royal Portrush. Watch them carefully.